Language and expression; presence and immateriality; play and pause—these themes are the heart of Dalena Tran’s practice, one that sits at the intersection of film, interactivity, installation, and thought. Her latest time-based project, the single-take film Incomplete, is a collaboration with multihyphenate artist Ash Koosha. It takes inspiration from Hito Steyerl’s concept of the democratized ‘poor image’—which Dalena notes is ‘collected, copied, and processed to the point of disorientation and anonymity,’ which illustrates ‘a different perception of coherency.’

Dalena sat down with us to speak about the mechanical poetry behind Incomplete, the triumphs of making time-based work inside a game engine, and what it means for a medium to shape perception.

From the interactive web comic "The Delay"

Who and what were your early influences, either in games, film, or art?

Some early influences were works that circulated online. Don Hertzfeldt’s Rejected and Chuck Jones’ The Dot and The Line come directly to mind. Delightful and so clever to watch simple, abstract shapes take on personalities that could have affective resonance through sound and movement. However, it was when I watched Salaam Cinema by Mohsen Makhmalbaf, as a Sophomore in college, that I seriously took to studying film. The mockumentary revealed a shifting veneer between cinema and reality; reality and fiction.

Of course, my film studies in the beginning were focused really on the theoretical study of the films themselves, if you could even call it that. It was an excuse to watch films and write essays, take photographs, or make collages influenced by them. I was really enamored with the seemingly endless ways to engage with the medium and culture around it.

It wasn’t until I watched Julien Donkey-Boy by Harmony Korine that I had an eagerness in making moving images myself. Each frame was like a painting. The conventions of storytelling were broken down into vignettes and portraits about the simple living of complex lives. The performances, camera movements, and edits were unnerving. It made whatever drama you thought you were watching very existential, tragic, and beautiful. I think what affected me the most about the film was the way Korine really captured the beauty of the format that was used to film the work. The film is shot on DV, and I was also using that format at the time to record interviews of musicians for a blog I was running on the side with some online friends. I thought there was really only one way to approach making images, and that was to: produce clarity, visibility, and reject aberrations. I had not seen a film capture the essence of the image by showing you the vulnerabilities of the format itself. It was really grainy and the edges of the subjects were blotchy and saturated. There was a clumsiness and agitation that transferred through the work that also emboldened and democratized the status of what a work of moving image art should and could be. 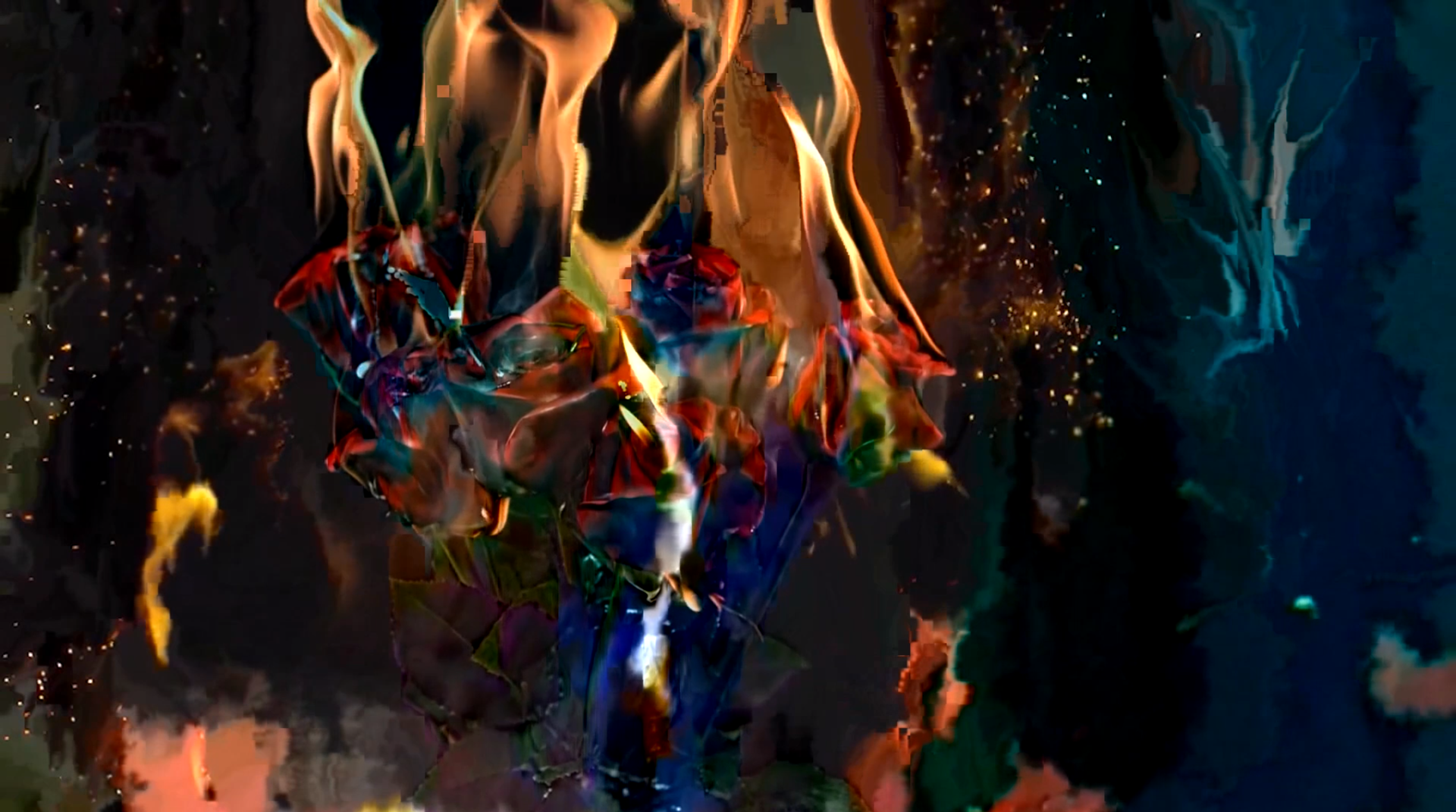 "All Things Found" is one of Dalena's earlier experiments in datamoshing.

How did your time studying film as an undergrad at the University of of Utah and graduate student at UCLA’s Design Media Arts program bring you into the world between films and interactivity?

I was producing very experimental work in film school. This was a program that expected students to receive an education to be employed in the industry, which only makes sense in the U.S., but I wanted to try a whole bunch of things and see what would happen. I knew what I was making was pretty weird for most of my classmates and teachers, and I was still processing a lot of youthful angst through my work. Outside of film school, I was designing and coding websites. I was making gifs, filming mundane things with my hi-8 camera, and writing poetry. This is also the time, between 2013-2016 that Tumblr and Facebook had their moment, and 3D graphical software were becoming more accessible. I used it, and so did my partner, Hirad Sab, along with other artists like Vince McKelvie, Eva Papamargariti, Kim Laughton, and Rachael Archibald, who were also all making work predominantly on the internet.

While I loved my time in film school, I needed the language and context to explore a lot more that I didn’t have access or support for. While some of my works are interactive, I’m drawn to tools and scenarios that are interactive as a part of making the work itself. In that sense, I think film is already interactive, with all these moving parts and players, scripts and timelines. Everything is always shifting, some things are rehearsed, but not all things are certain. Of course, a film, at the end, is linear and discrete. Film also has a slower timeline. It requires a very specific monolithic vision towards a form of expression because of all the pre-planned, moving parts. I was responding to an emerging scene of digital tools that were instant and dynamic, and altering the conventional notions of art on the web.

UCLA’s DMA program really allowed for my experimentations to take place. In terms of interactivity, it was really built into the program on the undergraduate and graduate level. To be clear, I don’t necessarily go into a project or work with the intention of making it interactive. If it deals with interactivity, it is usually a consequence of the tool, the nature of the platform or format I am working with. 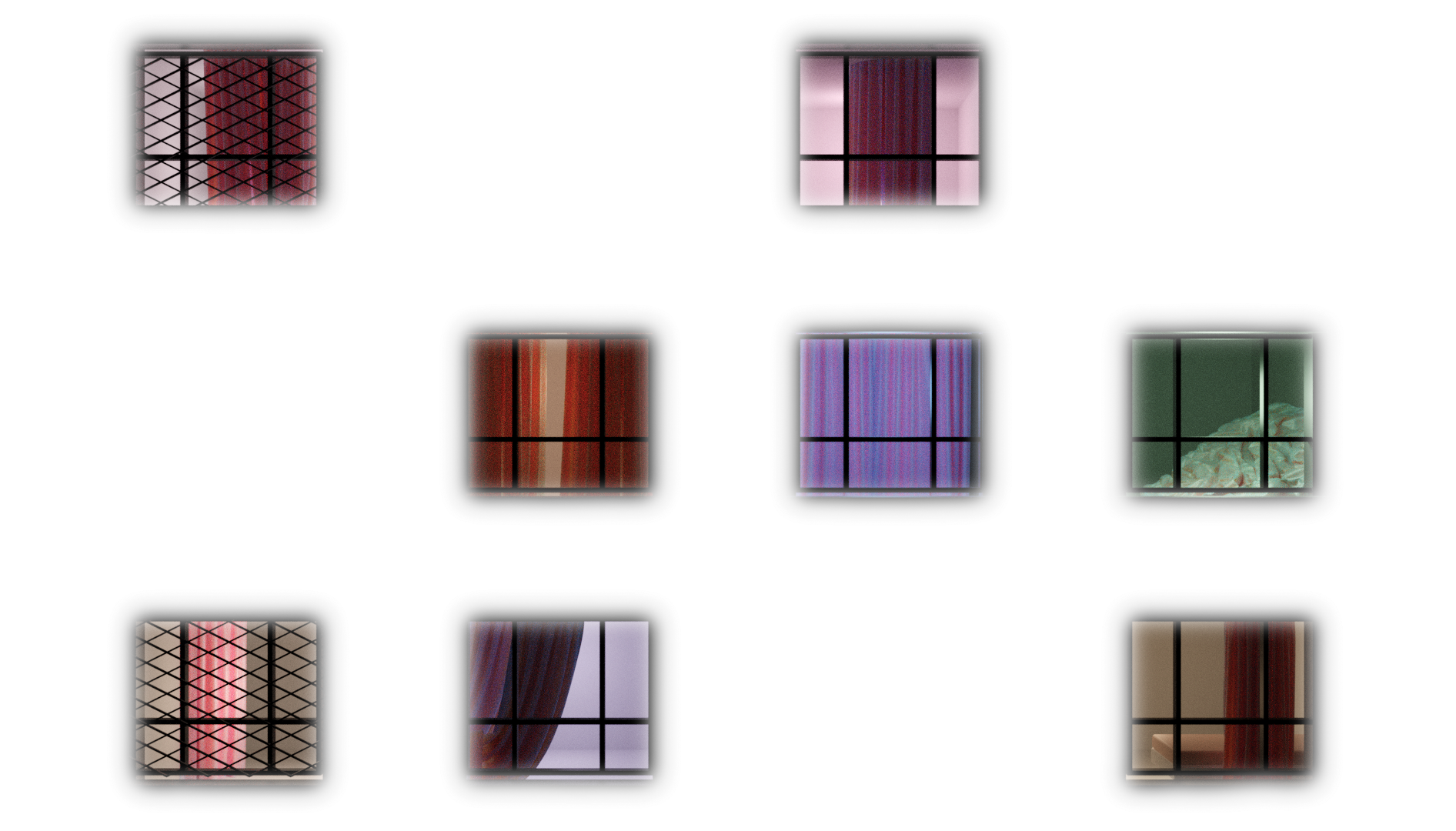 One of the several layers of "Tempo Rubato" —An ongoing research project and installation on stolen time.

What is the general design process for a project? How do you decide on a medium?

I usually have a question, vague expression, or maybe even a conviction that can often come off as esoteric and disorderly. Most of the time these impressions are enough to guide me towards a medium and method. Thematically, I’m drawn to media and mediation. So when I do find a medium, I enjoy imagining the ways a medium shapes perception, how it moves in the world, or offers moments of subjectivity. With an impression and theme in mind, I tend to either write short stories or do some form of worldbuilding which can either become a part of the work or the catalyst to more interesting expressions. Generally, I tend to leave things open, because I learn a lot about the work through the process, and because that’s usually when compelling things happen. 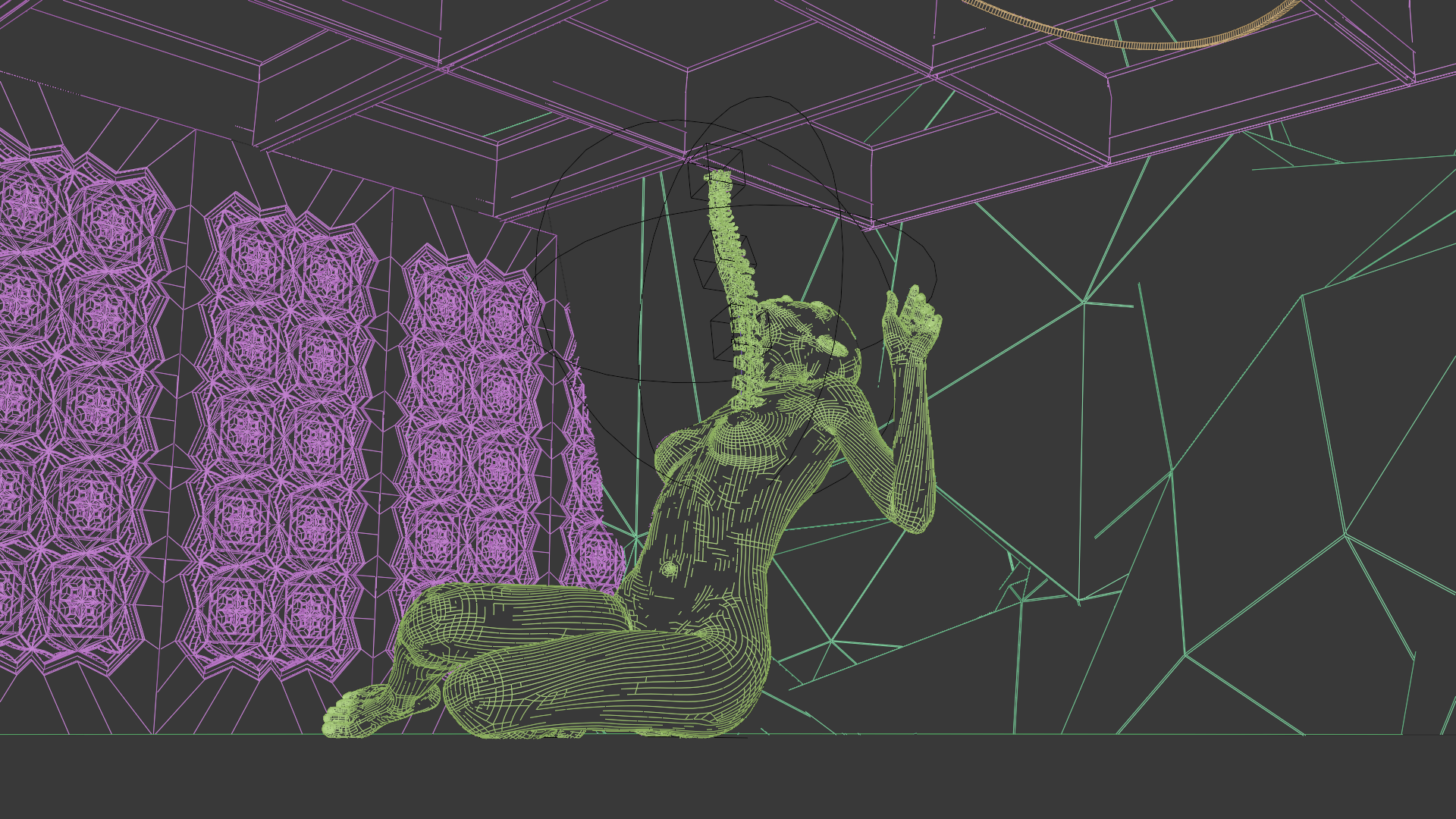 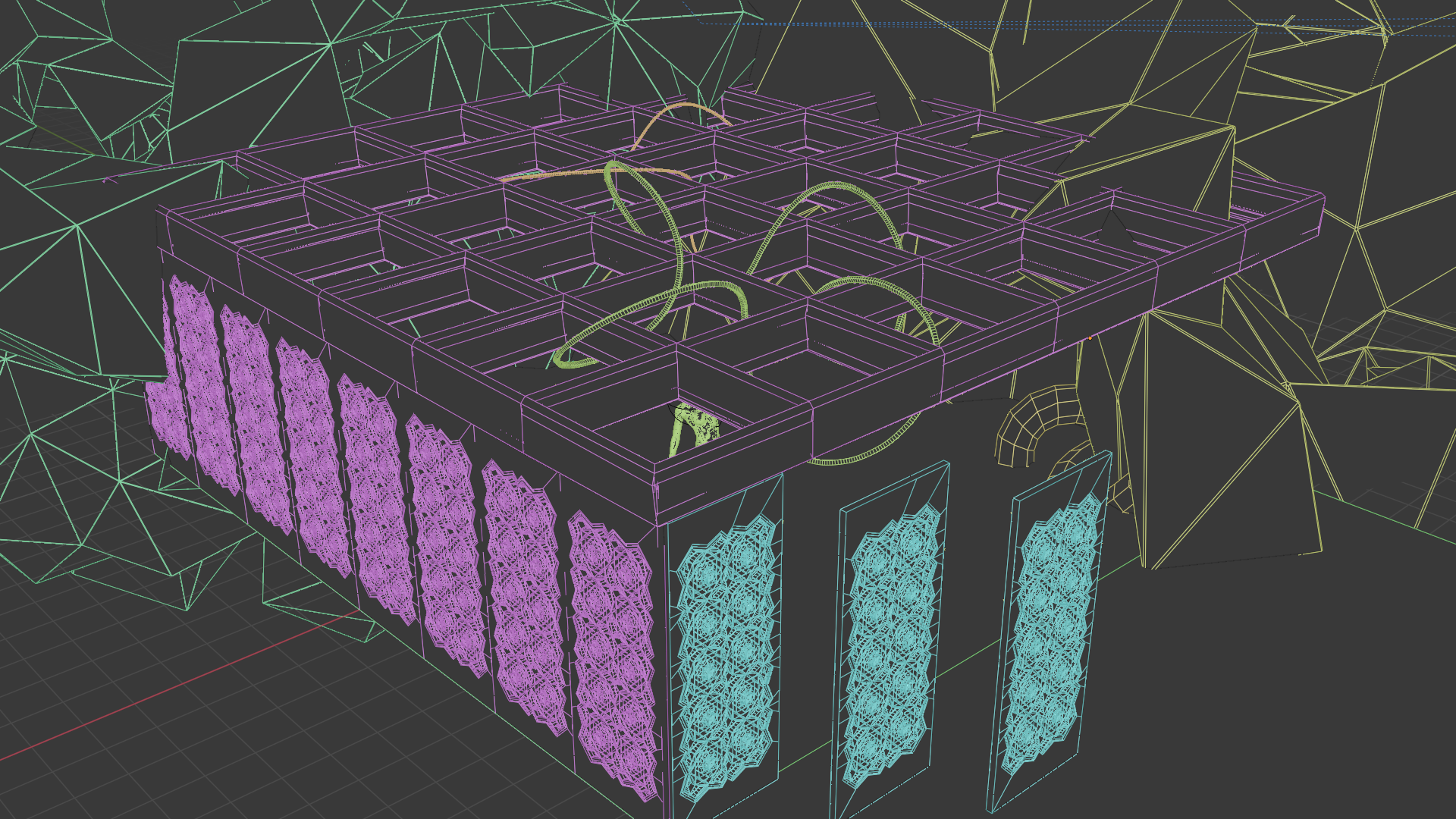 Some of your time-based projects have been made using game engines. What excites you about utilizing a game engine to construct a fictive world, and to disrupt our notions of time?

Working with a game engine has the ability to create in real-time while also having a relationship between generative control and flexibility in the process. It becomes very easy to bring in a ton of models and assets to then duplicate, transform, hybridize, change materials, change the lighting, add animation, move the camera, and see all those changes happen in the viewport. You know, path-trace rendering would just take forever. Who wants to put together a scene and go back and forth between the viewport and a rendered image? It really dampens the creative process and also leaves less room for spontaneity or dynamic uses of the software. While path-tracing is surely more physically accurate, advancements in real-time 3D platforms in recent years has made working with software like Unreal Game Engine or Blender’s Eevee a game changer. 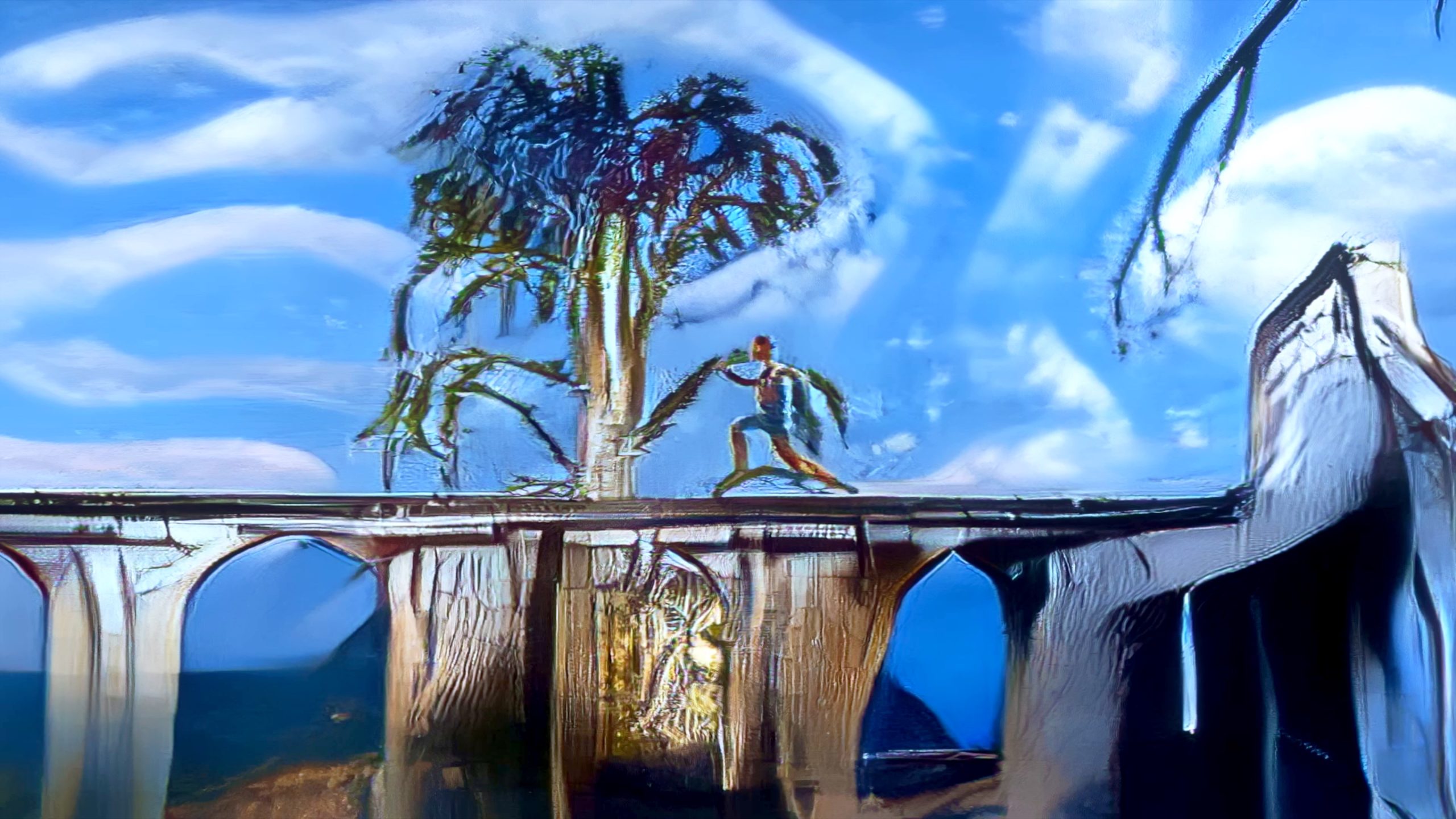 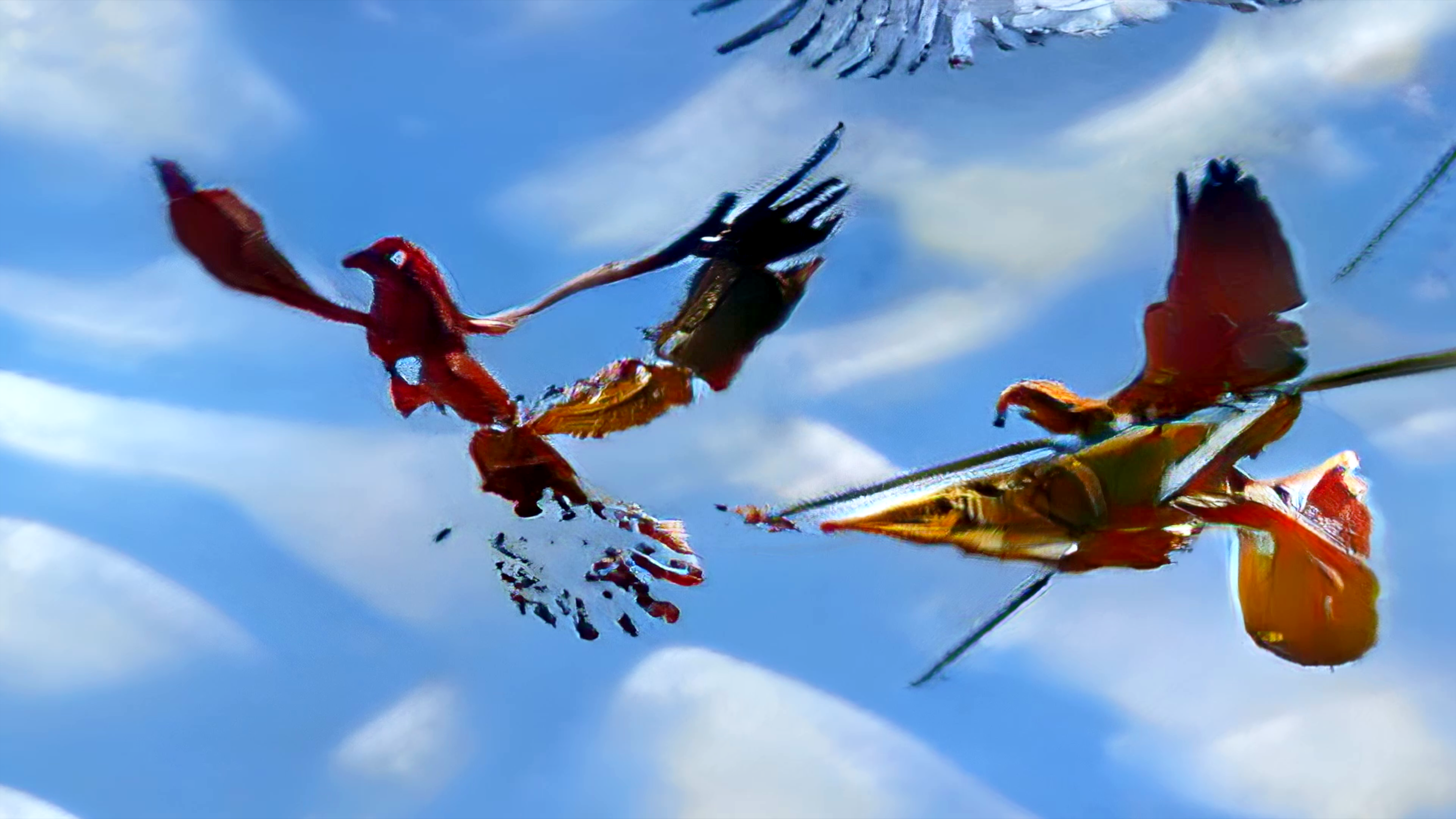 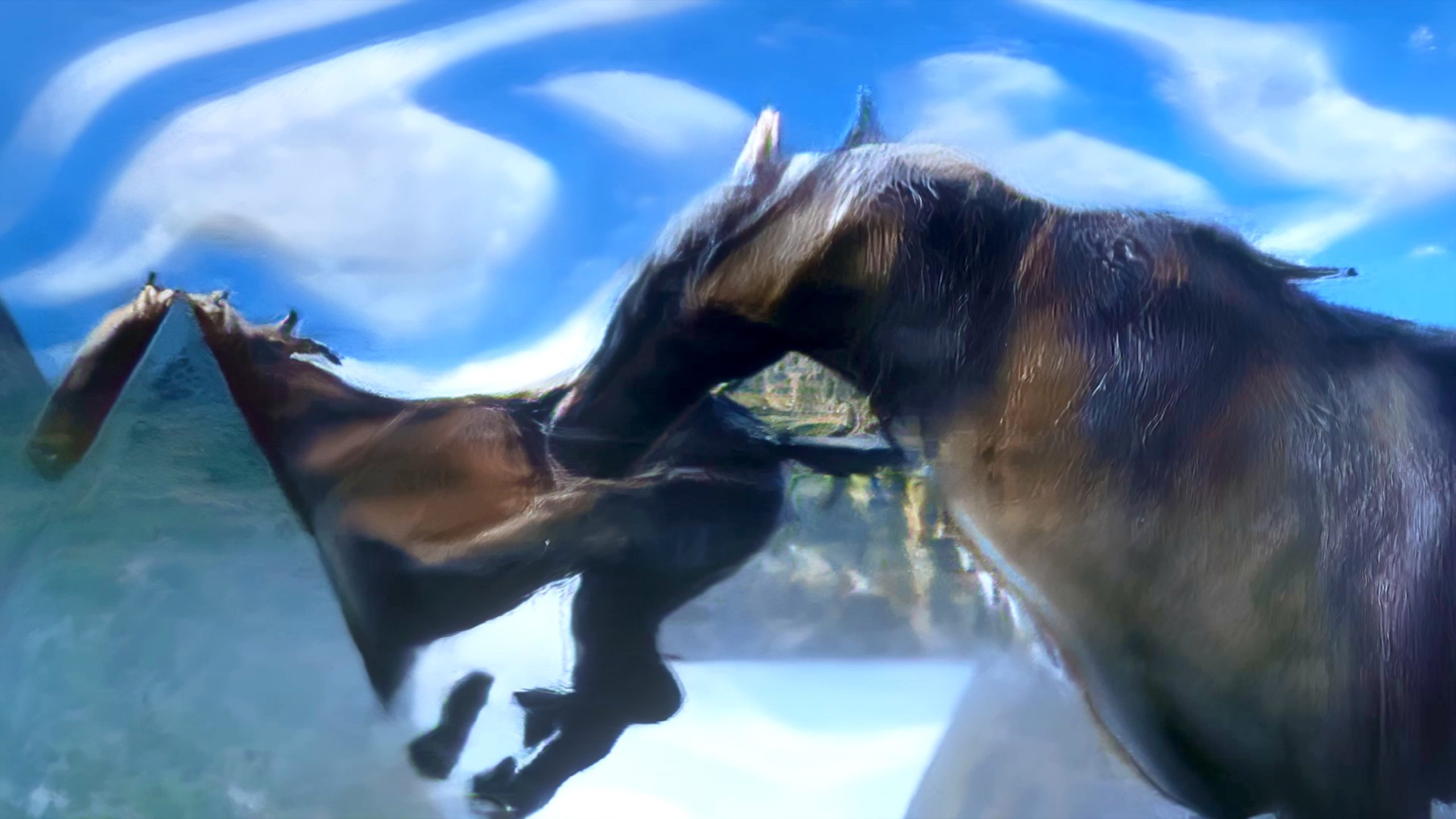 What were the conceptual origins and design process of Incomplete?

For Ashkan (aka Ash Koosha), Incomplete expresses the notion that the self is always changing, never complete. In addition, for me, Incomplete is a contemporary love song missing both the lover and the beloved. It reflects a paradox between over-stimulation and emptiness born out of a time of constant distraction and growing anxiety about the possibility of a future. While we offer different impressions of the song, they are not necessarily at odds; the sentiments hold relation to each other, and bring a unique tension in where they do contrast. I have great respect for my collaborative relationship with Ashkan. Not just because I enjoy his work and that he is a good friend of mine, but also because he has held space for a multiplicity of artistic visions to unfold. It takes faith in the creative process and an open mind to establish this aspect of collaboration. 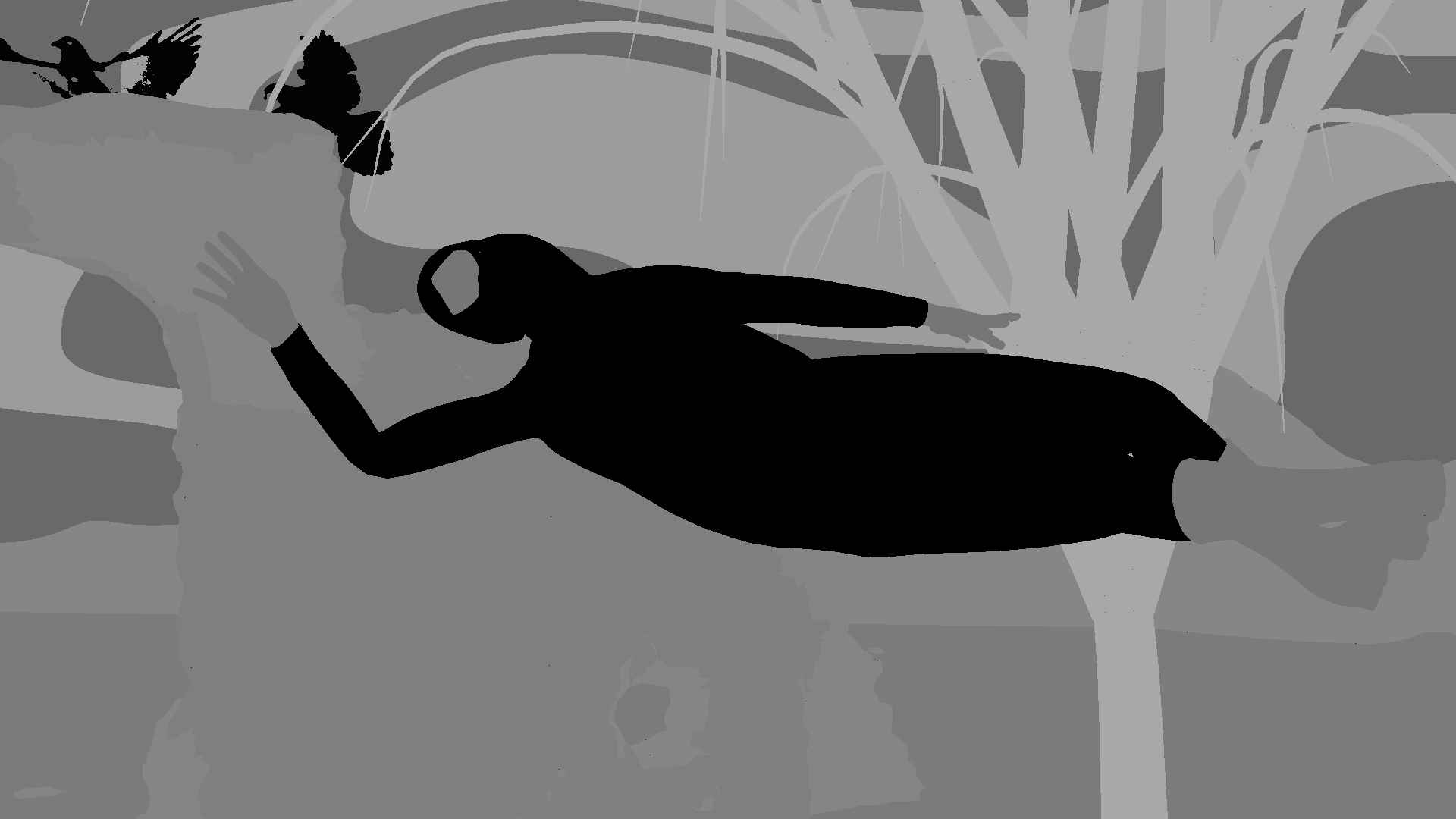 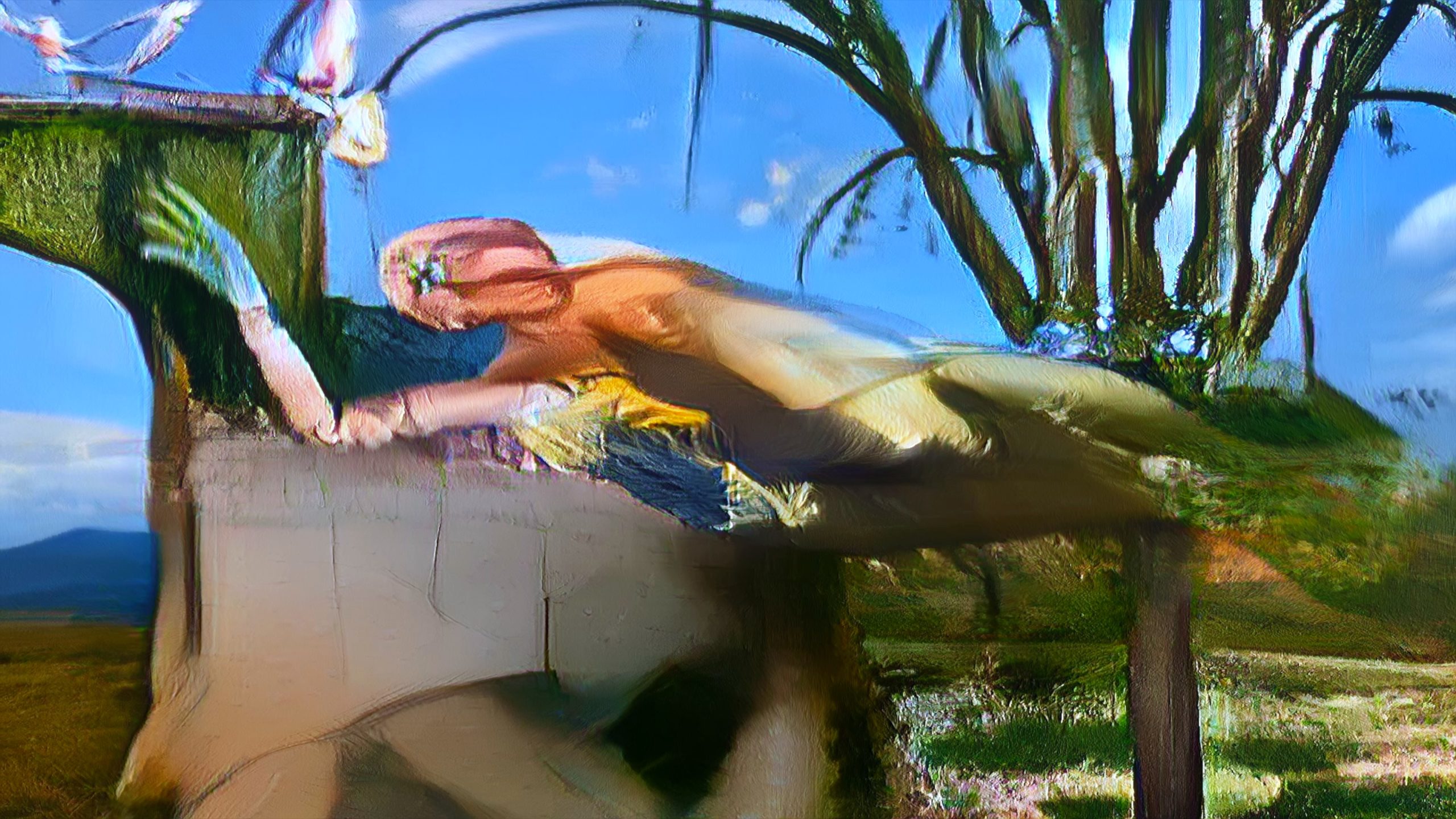 For Incomplete, how did you go about translating sound into image?

I wanted to animate the commotion and disjointed time-perception of today’s information. It is a scene where the ground no longer exists. All the forms are unstable, and all that is left to locate the space is the blue sky. Ashkan’s voice is the only familiar element that softens and grounds the song from beginning to end. His voice moves time forward even in the cacophonic wreckage. The camera’s single take continues at a steady pace as well. At the start, everything is moving and it never halts until the song finishes. The single take was a decision, also in part, to create temporal suspense.

As for the person, doves, and horses in Incomplete, they’re poetic expressions that just happened as I continued working through the music. Birds and horses generally come up a lot as I work. They are creatures illustrious for their locomotion and I was thinking about what it means to “travel” today when so much of how we are conceiving speed and proximity is less and less through space, and more through light.

The sounds in Incomplete are haptic; colliding and ricocheting off each other, creating electric and sharp discordances. This same effect is reflected in the animation and pictorial quality of the video. For this, simply put, I mapped GAN outputs onto the 3D forms. It becomes a generative process where each frame renders unique photographic amalgams in the animated sequence just slightly different from the last. As a result, this creates the trembling quality persistent in the video. This was an experimental discovery born out of a technical logic prevalent in node-based compositing and, in addition to, the generative characteristics of machine learning. Initially, this was a tedious workflow since there was a high margin of unpredictability and it wasn’t established as a protocol or into a piece of software. Hirad, with a knack to solve a technical problem, helped integrate custom features in my software that made working with the process more feasible and less excruciating. 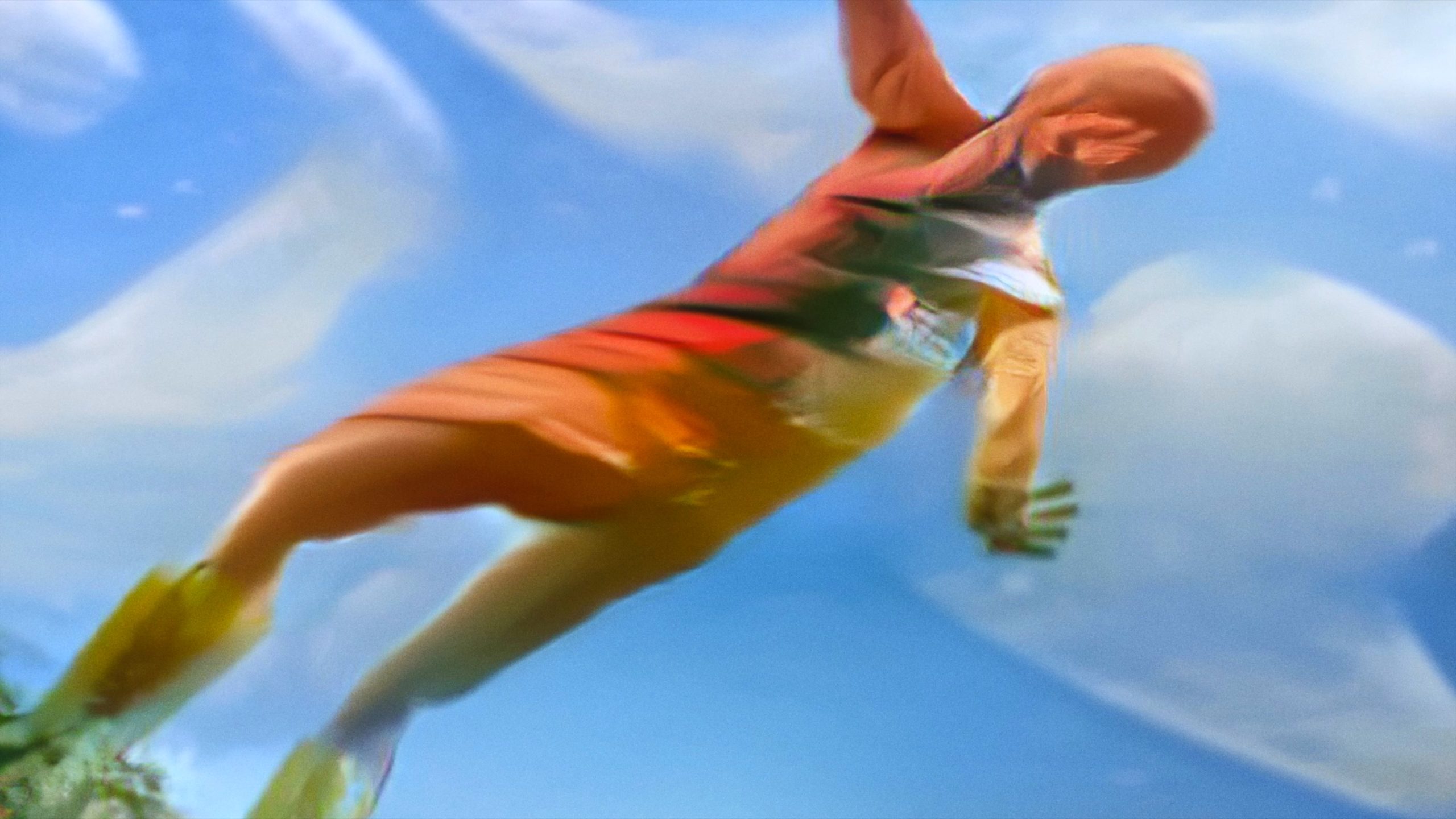 What advice would you give to creatives who are working in liminal, undefinable mediums and spaces?

There seems to be this disparity between what is possible and the language we have to imagine these possibilities; a condition that is inspired by, and conflicted with, nostalgia. Flexibility with language is a part of what contains or transforms our notion of what is art and how to perceive and engage with the creative process. In making things, whether for pleasure, necessity, or contract, there is some demand or expectation to define a creative work under existing mediums and formats, especially in order to receive institutional support or to receive the right clout from the right people. I don’t mean to dismiss a longing for the past, or to disregard what already exists, or even the validity of validation, but rather, to remind myself to leave space to experiment and be playful, and allow a creative work to be an indication of the time and context it exists in.