Based in New York City, Babycastles is a collective, an art space, and community. “We like to say our mission is fostering and amplifying diverse voices in video game culture,” collective member Lee Tusman says. As one of the key collaborators in the collective, Lee helps organize Babycastles Academy—a public education with workshops twice a month. Together with patron fellow collective member Hyacinth Nil and patron Max Neely-Cohen, Lee also helps organize the _ _ _ – in – Residence program, where participants “will be given a platform to work on and present new work, access to the Babycastles community and network, support, honoraria, and opportunities to teach and present their work in a public setting.”

Here, we speak with Lee and Hyacinth about the _ _ _ – In – Residence program—what the Babycastles team looks for in an applicant, how it’s structured, and the folks who makes residency selections.

Tell us a little bit about the _____-in-residence program. How is it structured?

Lee: Since it began during the pandemic, we’ve had to run it online by necessity. Residents meet online together throughout the program, are part of a Resident Discord community, and present their work publicly online (and hopefully later, in-person). They also give talks or workshops. Throughout their time in residency, they work on a project that they applied with and get feedback from each other, the Babycastles community, and through studio visits with guests. At the end of the program, they give a presentation on their work.

Lee: We have guest judges for each round of the residency program. Our most recent guest judges were artist Everest Pipkin and producer/curator Sarah Brin, and our first round judges were Clara Fernandez-Vara and Naomi Clark, both game designer-scholars. Judges look for interesting project ideas and fit for Babycastles’ mission. As with many other residency programs we have many more excellent applications received than we could offer spaces for, so we also offer to send tailored feedback to any applicant that requests it.

Hyacinth: The Babycastles ___-in-Residence came out of us wanting to help support exciting art that might not be as easy to pitch to more traditional arts residencies. Interactive installations and video-games are our bread and butter, but we didn’t want to limit the scope to just that, hence the name. For the two sessions that we’ve run so far, we’ve held it entirely online out of necessity—though going forward I would love to continue to do that to allow people from all over to submit applications and participate. Structurally, each resident is focused on making one project over the course of about three months. We use a combination of Discord, email, and Jitsi for communication, trying to meet regularly (every 2 weeks or so) in order to discuss progress and goals, along with a final presentation at the end where each resident shares what they’ve made. Additionally, we try to get at least one expert in the area that each resident is focused on to provide feedback on their work. 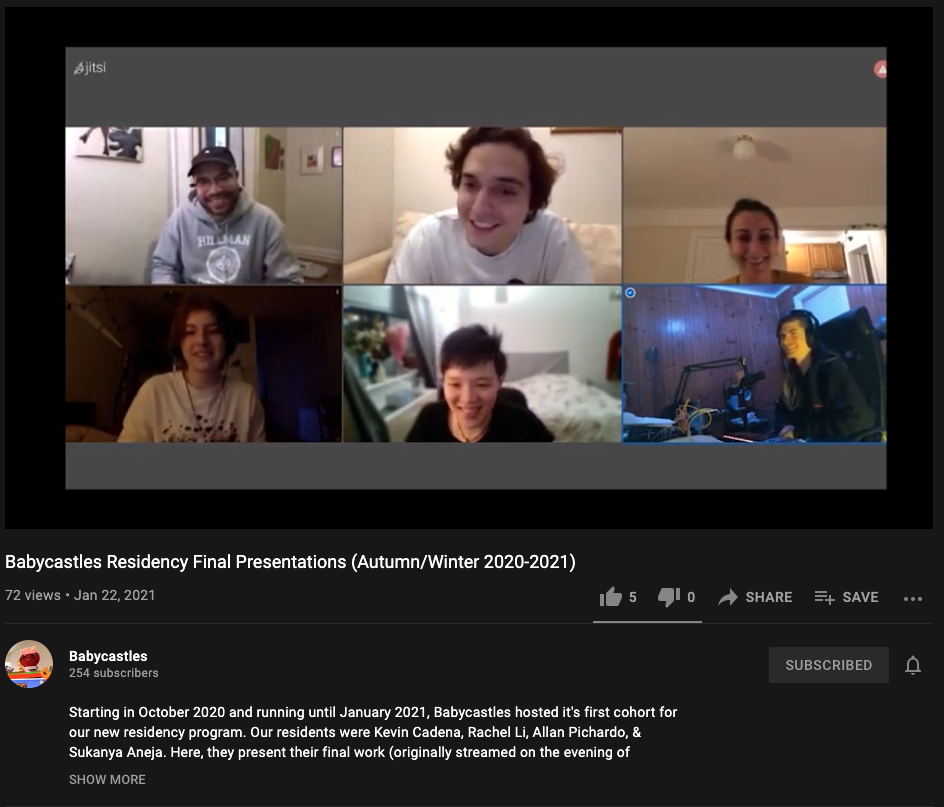 In the past, what kinds of folks have successfully completed the Babycastles residency? What does Babycastles value in a residency applicant and application?

Lee: We’re interested in play and understanding games with a broad approach to the field of playful media. Our residency name is meant to indicate that we invite all kinds of creative practitioners: not just experimental game designers associated with the kinds of playful media we’ve presented in the past but also community-builders, engineers, researchers, dancers, artists, scholars, dungeon-masters, chefs, writers, farmers and more. We’re a space motivated by the full range of experimental interactive art, media art, tactical media, DIY games, visual novels, livecoding and many developing forms of new media, so we’re a good place for folks interested in working in this area. We see game creation as a medium synthesizing visual design, sound, sculpture, programming, scholarship, and performance. Past residents have made games, started up their own mini-residencies within our own, taught workshops on machine learning and sound creation, and designed esoteric programming languages as artwork. Most recently artist Kevin Cadena founded DigiMyths, a program bringing together “third culture kids” for public programs, speaker series, printed publications and co-working sessions.

Hyacinth: We’ve received applications from so many different kinds of artists, but those who have successfully completed it have usually had a succinct idea that they had most of the skills they needed to realize. Due to the online and largely asynchronous nature of this program, it’s necessary to be able to manage your time well, plan, and set realistic goals. That’s one of the biggest factors for me personally when looking at applications—how aware is the applicant of time and scope. As for the applicants themselves, we’ve mostly gone for people who are working outside of the mainstream games and interactive media industries (or who have been kept out of it). Usually this means nonwhite people, queer people, and other marginalized people. We look for some amount of experience making art and having some kind of portfolio that shows off the kind of work they make, but we encourage artists of all experience levels to apply.

What advice would you give for future potential applicants?

Lee: We invite anyone interested to join in one of our public programs online on Twitch, in our Discord group, or in the gallery when we’re able to be open to the public again. I really love our community and our residency program, but keep in mind that we’re also not the only game in town! I’m an artist and educator myself, and so the most important thing I’ve found is to find a community that you want to be a part of and join it. Making friends and finding creative practitioners to befriend and grow with can sustain you at so many stages of life.

Hyacinth: So far, the people we’ve picked have generally had applications that were both something that we hadn’t really seen before elsewhere, and were reasonably specific. We like to be able to imagine what something will look like as it comes together. Additionally, we like it when an application seems to pay attention to scope. Three months is not a very long time to complete *any* project, and we tend to prioritize applications that understand that. We usually don’t go for projects that we think would be at home in other arts residencies—as a small DIY space with an interest in video games, we can accommodate stranger or more experimental projects, and we’re not aware of many other residencies that have a focus on games & play, so feel free to get weird with it.