Seeing the natural world through games

Montreal-based Paloma Dawkins is a cartoonist and self-taught animator turned virtual reality and video game artist. Known for her fantastical landscapes inhabited by strange and lovable characters, Paloma strives to create games that are surreal and beautiful. Her past work includes the technicolor rainbow graphic novel Summerland, the minimalist and meditative rhythm game ALEA, and the psychedelic explore game Gardenarium. Paloma’s latest game, Songs of the Lost, is a magical-realist odyssey to the tunes of composer Jlin.

She first came to work with the National Film Board of Canada through its Hothouse animation apprenticeship program, which resulted in Scientifiq Piqniq, an animated adventure through the cosmic unveiling of the beautiful and strange macro/micro structures that unite us with the Universe.

We talked to Paloma about taking your time while hiking, taking inspiration from the ocean, and taking stock of life with the power of palm reading. 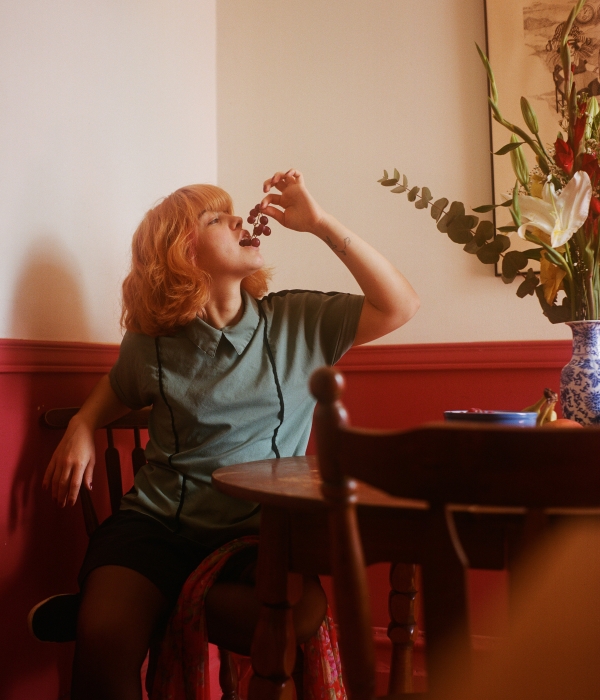 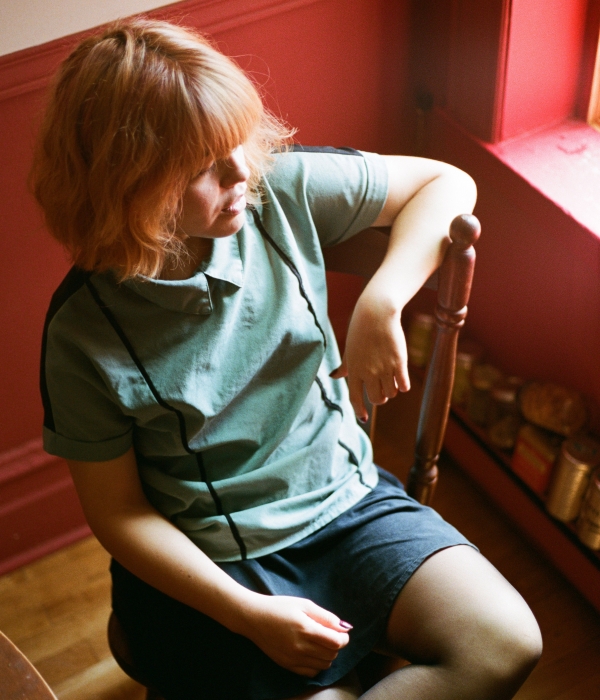 How did you learn to make games?

Whenever I started making games, I had already been animating for a while, and I taught myself the programs. I usually teach myself, so I already know how to ask for help. I just did the same thing to learn code.

It was just me and other Unity artists that knew how to do certain things that I wanted to try in the game engine. I’d ask them to walk me through it, which is way less scary than trying to learn everything all at once. I learned by having small projects and doing them one at a time.

I went to school for drawing, art, art history, and stuff like that. But when I left school I didn’t really want to just do that. I wanted to animate. I started working with computers. That’s my tool. It felt like the computer chose me as a medium. At the time I couldn’t afford art supplies, but I already had a computer and so I would just draw on it.

I love that. That the computer chose you.

I’ve always wanted to do cartoons, and I’ve always liked faces and figures, but I learned a lot while traveling and doing sketches of nature. That super duper took my stuff to another level because I started caring about the environment and about patterns.

My characters became much more interesting to look at the first time I traveled to British Columbia. It’s so beautiful there.

Are there places that you’ve traveled to that have really stuck in your memory and inspired a game?

When I was in Los Angeles, I was making a game called ALEA. I loved LA. I went hiking a lot and it’s just so nice.

Now that I’m in Thailand, that’s taking my imagination to another place. I came here as a part of Pirate Jam, which is organized by American McGee and Free Lives. They invited people from all over the world to come to Thailand and to make a game while sailing. I’d never sailed before. I’d never been to Asia. The water is so beautiful and green. 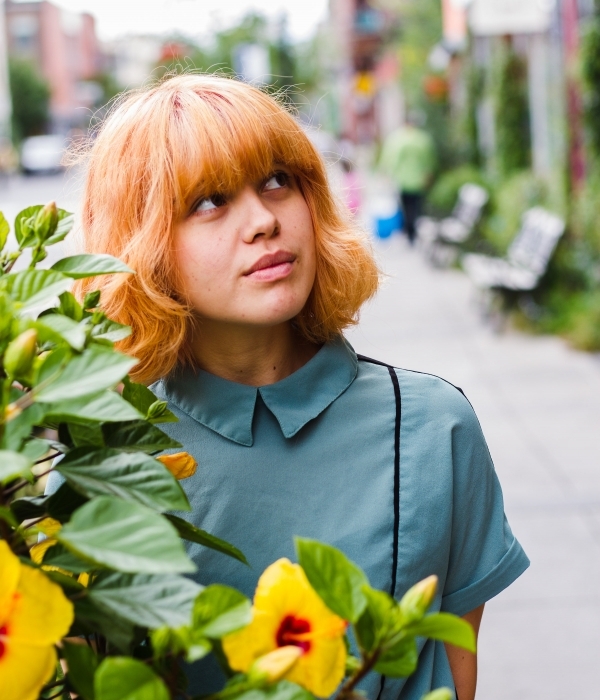 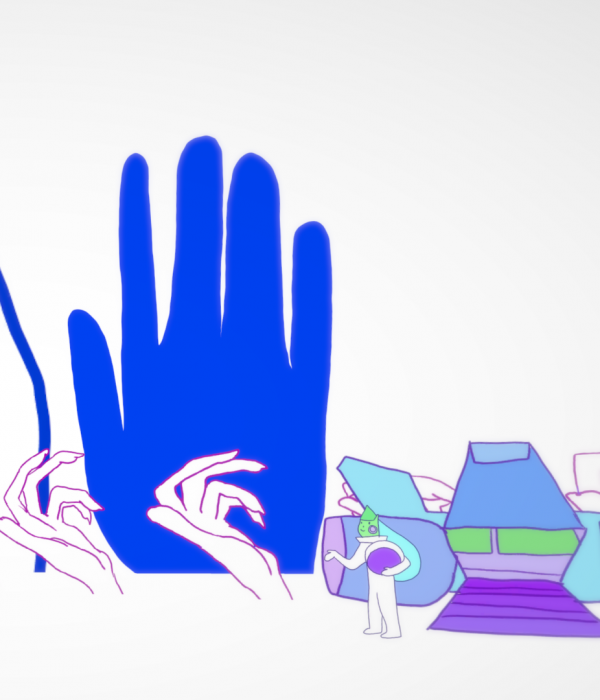 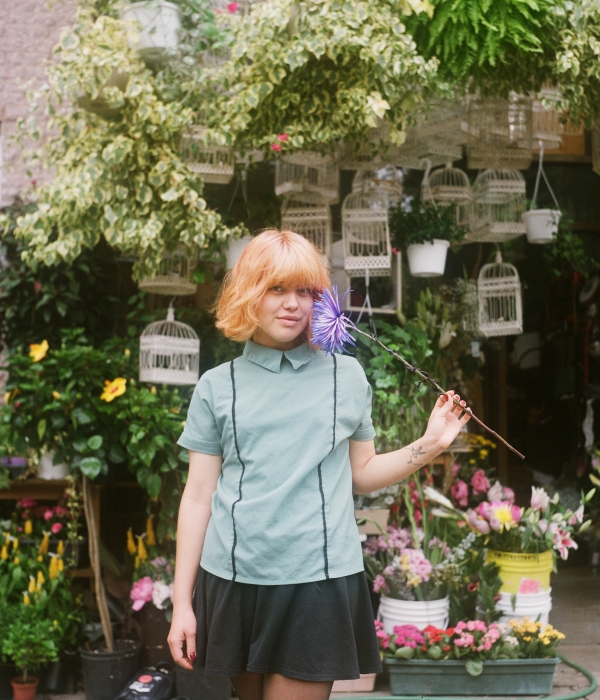 Is there a game that’s already forming in your head?

I’ve actually been working on a game about the ocean, so I’m kind of looking for inspiration while I’m here. Just looking at the water and what kind of creatures are in it. My game is going to be about the circle of fish in the ocean that deals with all the sound pollution from seismic surveying and plastic in the ocean.

Is climate change something you want to address in your games?

Climate change is a part of a bigger issue. It’s this alienation towards nature. Kids go to a grocery store and see something wrapped in plastic and they think, “oh, it comes from the grocery store.” They don’t even know what goes into raising a cow.

I want to re-sensitize people towards nature in my games, because when I’m making games, I’m looking at my computer. If I’m gonna be stuck at my computer, I might as well look at plants. So I make my own.

Do you think that video games are a part of nature?

100%. I feel like computers are just so human and we just make them a reflection of ourselves. We’ve depended on plants for so long that they are a part of us. We work them into computers all the time.

“Climate change is a part of a bigger issue. It’s this alienation towards nature… I want to re-sensitize people towards nature in my games.” 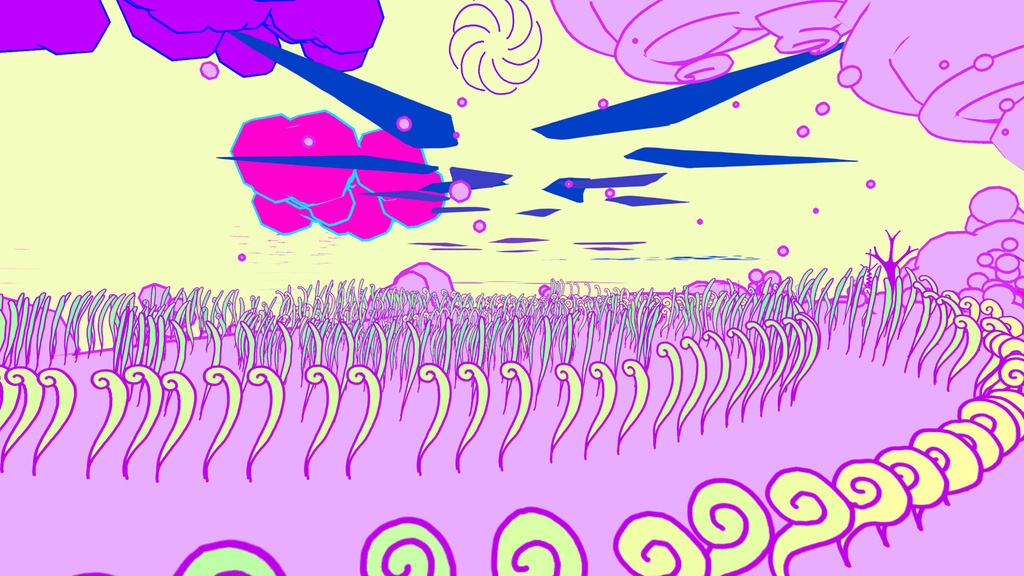 Are you ever scared of technology?

When I went through your game Palmystery, it conjured up for me all these different things. The game is rife with surrealist, mythological and mystical imagery. It reminded me of Salvador Dali, parts of Courage the Cowardly Dog, and parts of Salvation Mountain near LA. It reads differently from your other games in that it’s explicitly a horror game, but it has a child-like nostalgia.

I had been working on Museum of Symmetry for quite a while at this point, and I was feeling frustrated with it. Like writer’s block.

I was holding onto this childish energy that made me want to start the project. It’s super colorful, bright, and nice. But it’s maddening to work on whenever you don’t feel like that. You work on this happy thing, and yet you’re thinking, ”I just want to be mad.”

Trump got elected and I was trying to feel happy in a time when everyone around me was crying. Nobody could talk about it. It felt so overwhelming and I felt that maybe I shouldn’t waste this unhappy energy. I wanted to channel it.

I took a break from work on Museum of Symmetry to channel that energy. I made random animation. I made angry hands. Then I thought, “Oh this looks fun. Maybe I can do a game that looks like this. Just hands.” I was talking to a friend about it and they told me: “You should call it palmistry, and have palms with future telling.”

That’s genius. And so I did it. Just put it out there.

Are you interested in palm reading, tarot, and astrology? It’s a much more freeform way of learning about yourself and defining your identity. 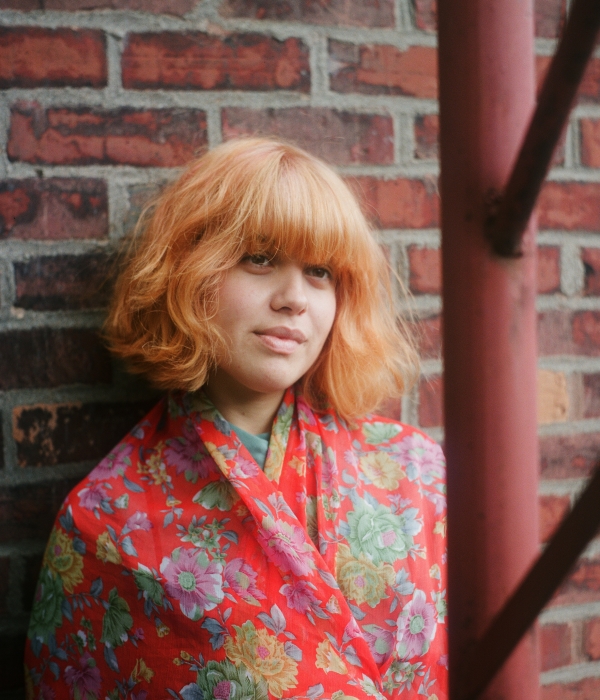 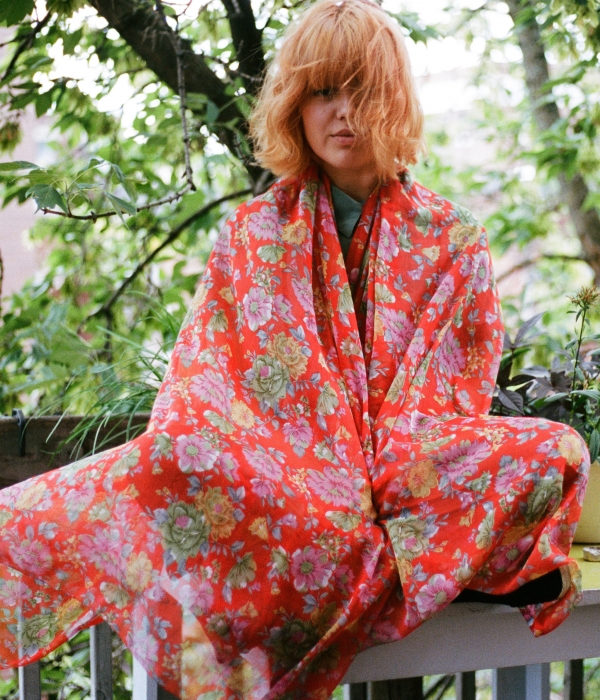 What experience do you feel like you want people to have when they play your games?

I just want to make stranger games. I want to see things that don’t exist yet. Relaxing games exist already, but I haven’t done it yet. I’m not interested in challenges in the computer space. I don’t really see the value in perfecting the physics in some alternate universe.

I feel like the thing that’s useful is relaxing and exploring.

As a character that stood out to me in Gardenarium would say, “life is a journey, not a destination.”

I was living in LA and I was hiking with a bunch of people that were going really, really fast. And to me, hiking is enjoying nature. But they were just walking so fast. It was like they were trying to get to the end, as if that was the point. To just get to the end. Why would anybody be rushing through this beautiful place that we’ve driven for hours to get to? We’re all just looking at our feet, talking loudly, and walking fast. I’m just gonna stop and look around me.

There’s a certain kind of forgiveness or patience to some of your games.

I never want to put in a measurement system. I don’t want to measure success in my little worlds.

Do you ever dream in cartoons?

Oh my God. Yes. It’s so weird that you asked that. I’ve been having super cinematic dreams lately. Kind of crazy. I feel like I have based a lot of my art on my dreams and I have a lot to work with now.

I had one recently where I was a producer in a theater troupe, and the troupe was getting possessed by a ghost. One by one, each member was becoming possessed and they would do weird, spooky stuff to me, yet everyone I talked to said “No, they’re just getting into character. Don’t worry.” I would just say, “Okay, I guess you’re right.” But then it would just keep getting worse and worse.

I woke up sweating. That was a scary one. 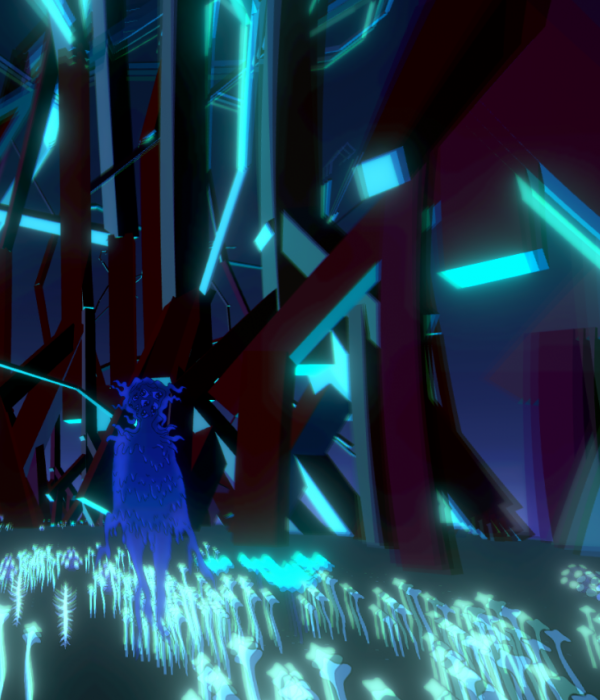 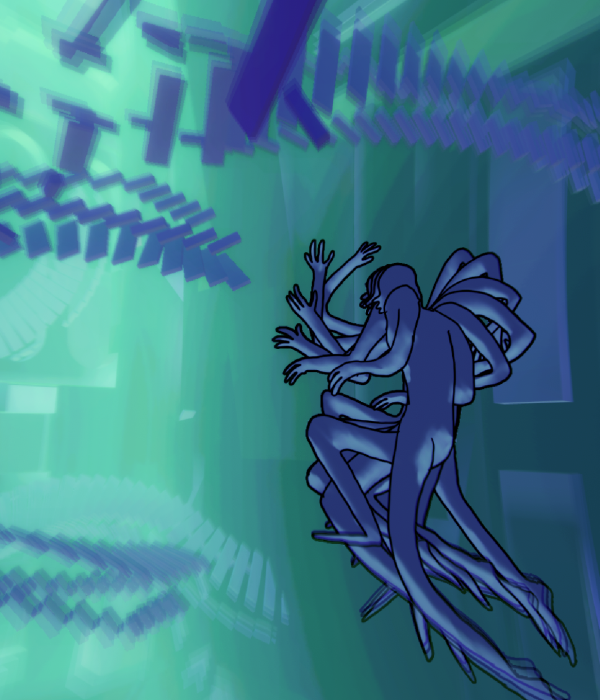 Stills from Paloma's latest work, "Songs of the Lost."

Interview conducted by Jamin Warren in 2018. Edited and condensed for clarity.