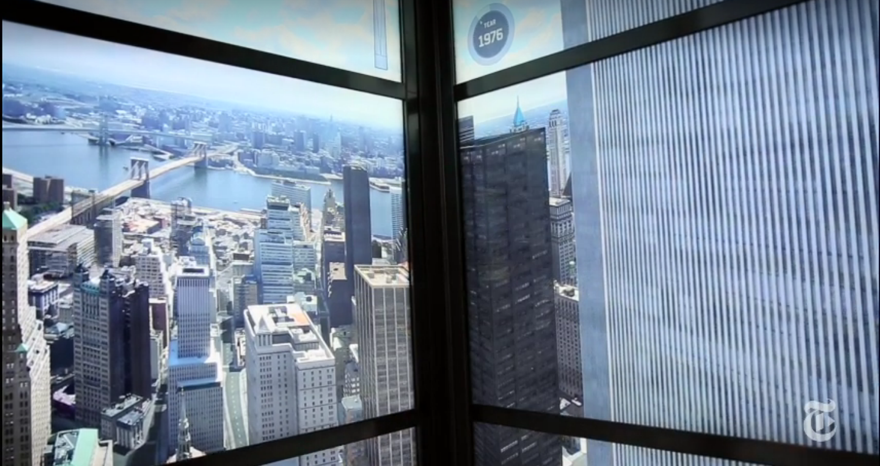 There are things you want to see while locked in an elevator. And then there’s the sight of the neighboring skyscraper suddenly disappearing from the skyline. The elevators leading to 1 World Trade Center’s observatory offer both.

This is not a malicious prank. As they ascend to the 102nd floor, the building’s five elevators display a carefully rendered time lapse of New York City’s rise. That ascent, like the elevator’s, is a linear progression. Thus, at ground level, the elevator’s show the city’s first buildings rising out of the dirt. Single story buildings grow into multi-story buildings, which, in turn, become skyscrapers. The elevator’s journey through time, which is, in effect, an exploration of height. The notable exception to this whiggish progression is the former World Trade Center, which appears for four seconds only to disappear after 2001.

“We did not think you could ignore it,” Port Authority chairman David W. Checketts told the New York Times’ David W. Dunlap. “Having it appear in the year it did and disappear in the year it did was the respectful way of addressing the fact that it was part of the landscape.” Within the context of the elevator’s time lapse, this is undoubtedly true. Excising the World Trade Center from a comprehensive history of New York City could never have been a realistic option.

It should be noted that the elevators at 1 World Trade Center did not have to include such a comprehensive time lapse. That was a design decision and the obviousness of Checketts’ argument stems from the premise that such a decision was the only way of proceeding. Elevators designers ignore inconvenient facts all the time. In 2002, a spokesman for the Otis Elevator Company told the Realty Times that 85% of elevators didn’t have a 13th floor. Designers downplay physical realities so as to avoid discomforting users on a regular basis.

It is, however, easier to get an elevator occupant to momentarily forget that there is a thirteenth floor than it is to get them to forget 9/11. In that light, the elevator display at 1 World Trade Center is eminently reasonable. It is nevertheless important to get past Checketts’ defense of the display and recognize that the time lapse was a choice: a good choice? Maybe, but a choice nonetheless.

Historical representations are always the result of such choices. They tie together facts to build a narrative. In the case of 1 World Trade Center, that narrative is that the building is the culmination of centuries of American history. It picks up where the World Trade Center left off and forges onwards and upwards. These claims are all defensible, but they cast the project in the best possible light for its developers. Is 1 World Trade Center the latest step in New York City’s inexorably linear progression? Possibly, but the elevator display won’t allow any of that doubt to creep in, even as the World Trade Center towers disappear from the skyline.