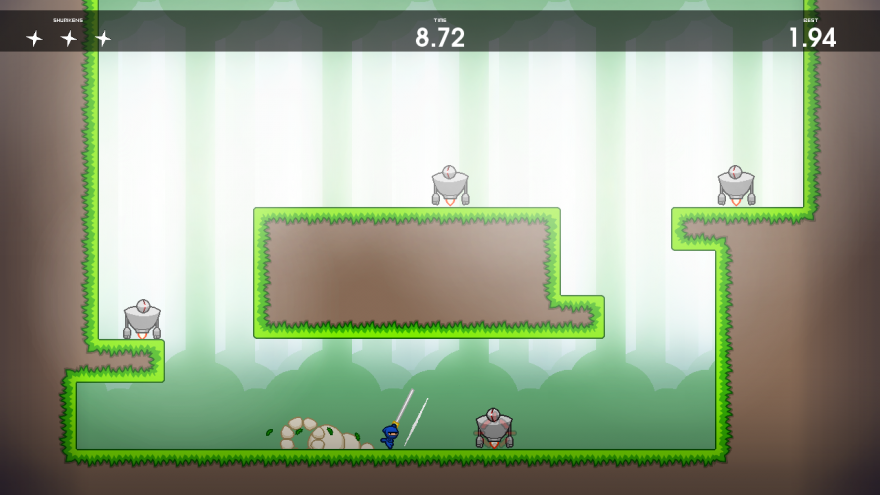 Super Meat Boy is a platformer with a quick turnaround; that’s part of its appeal. You jump, you die, you restart again without hesitation or a loading screen. Compare it to the 2D Mario games—the definitive classic platformer—and you can see that Super Meat Boy‘s design is defined by shorter levels that are navigable with a much faster and more agile character.

Meat Boy has a sprint button and can wall jump endlessly. Mario looks like the old man he is in comparison. What we see with Super Meat Boy‘s design is a distillation of the platformer’s essence. We’re encouraged to replay levels in a seamless loop to achieve perfection.

Now, just over three years after Super Meat Boy, we have 10 Second Ninja squashing that snappy formula down even further. It wears its microscopic loop proudly in its title.

10 Second Ninja makes Meat Boy look as slow as Mario due to its shuriken.

Instead of having to reach a flag pole or Bandage Girl, in 10 Second Ninja you have to defeat all of Hitler’s robot minions to stop the timer. This frees up the linear A-to-B paths that platformers usually funnel you through, so immediately, there’s space for experimentation; a need to take different routes between slicing up the robots.

But running is for fools. Mario did it, and yes, Meat Boy did it quicker, but 10 Second Ninja makes Meat Boy look as slow as Mario due to its shuriken. I’m reminded of my old soccer coach, whose motto was: “Let the ball do the work.” Why dribble the ball when you can kick it across the field to another player; don’t tire yourself out.

Similarly, the three shurikens that Ninja arms you with in each level enable certain movements to be bypassed altogether. Finding where and when to throw your shuriken can be the difference between a 1-star time and 3-star perfection. Later levels introduce large stalactites that fall on robots when struck with the shuriken, and the portals in Hitler’s Deathcube cause shuriken to travel in different directions, and to zap across the level.

Being faster isn’t just a matter of mashing buttons quicker, then. Strategy is usually the key. There was a moment when I was 0.01 of a second behind another player. It’s such a tiny number. Yet, it feels so far away without the right path. After analyzing the placement of the platforms, and the positioning of the robots, I spotted a faster route, and nailed it with a few minutes of intense replaying. Suddenly, I jumped 0.20 of a second ahead of this other player, which is a lot on 10 Second Ninja‘s leaderboards. I had thrown down the gauntlet.

10 Second Ninja drives you to obsession over the tiniest of delays. Not landing correctly, or slightly touching a wall is enough for you to slam the RB button to restart; it becomes instinctual. The fast-looping replays are meditative. With enough practice and focus, you’re able to reach zen, where it’s almost as if time slows down.

It’s all worth it when you shave off a few milliseconds and daydream about other players asking: “How did he get that fast?! It seems impossible.”

You can purchase 10 Second Ninja on Steam.