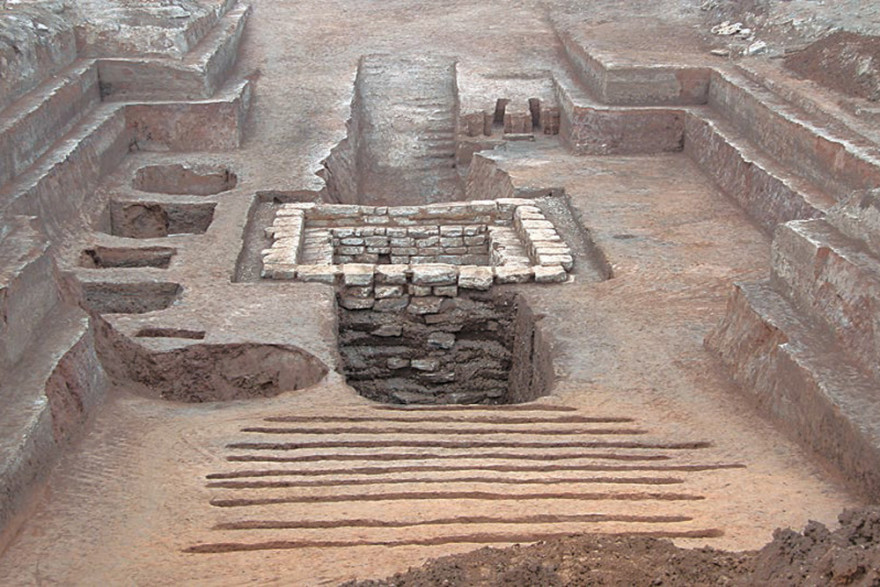 When one thinks of the tombs plundered by videogame heroine Lara Croft, or even legendary adventure film archaeologist Indiana Jones, untold treasures and riches typically await them. During a 2004 excavation in China of first emperor of the Qin dynasty Qin Shi Huangdi’s self-constructed, terracotta warrior guarded, 2,300-year-old tomb, various artifacts were uncovered. Though not entirely reported until a full decade later in 2014 Chinese journal Wenwu, and translated recently into English and published in the Chinese Cultural Relics journal, the surprising find of an ancient board game was uncovered.

The ancient game, having been unplayed for approximately 1,500 years, was discovered in the heavily looted tomb along with a skeleton, presumably of one of the tomb’s aforementioned grave robbers. The game’s pieces consist of a 14-sided die (carved out of an old animal tooth), 21 numbered rectangular game pieces, and a slab of broken tile, thought to be a piece of the game’s board. The reconstructed tile was decorated with two eyes, which were painted amongst stormy cloud and thunder sketches, as archaeologists reported in their findings.

The game’s pieces are reported by archaeologists to potentially be of “liubo,” mostly called “bo” for short. “Bo” seemingly vanished from the history of ancient Chinese board games around 1,500 years ago, and researchers have remained at a loss as to how the game was played, as well as being unsure if the rules of the game even varied from generation to generation of players. The closest clue is that of a 2,200-year-old poem by Song Yu, which recounts a game with similar pieces to the ancient board game’s artifacts found over the years.

The 14-faced die is where this ancient game gets particularly interesting. Twelve sides of the die are numbered one through six in the ancient Chinese calligraphy of zhuan-shu, or “seal script,” which existed as the formal script for all of China during the Qin dynasty. However, the remaining two sides are blank – entirely vacant of any marks. Even with this new discovery, “Bo” remains a mystery to all.