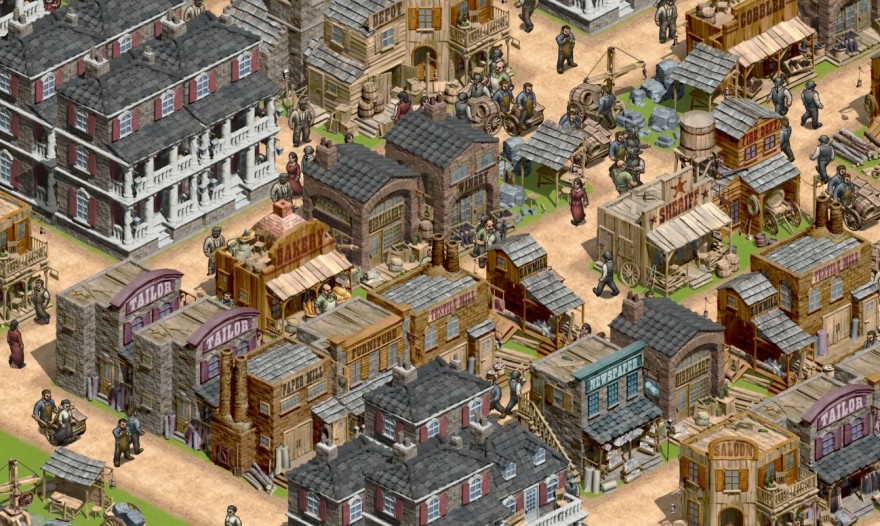 Pedal back time to 1850s and you’ll see a familiar sight. People flocking to the state’s largest cities with strike-it-rich schemes ringing in their ears. However, rather than ultra-wealthy blue-chip companies and resident entertainers, you’d see people biting down on nuggets of gold, and the sharp arcs of pickaxes creating rhythms as they dig into stone.

This is, of course, the California Gold Rush. James W. Marshall was the first to discover the gold in county during the early months of 1848. Word soon spread, inciting thousands of people to flock to from the rest of the , and at first; then , , and joined in not long after.

could be considered the fig-leaf edition of the California Gold Rush.

Cities were erected, populations expanded rapidly, and it became a time of prosperity for almost anyone who was willing to get their feet wet and pan the rivers for gold. The team at Somasim Games observed this part of American history and must have thought it the perfect setting for a city building game.

They were right. The resulting game, aptly named 1849, has you keeping hundreds of forty-niners happy as you construct houses and create jobs for them. Not all of them can be gold miners, mind: You need to ensure bakeries, lumberjacks, and distilleries are up and running; sheriffs are preventing the unemployed robbing your town’s stocks; and the field workers are picking fruit, harvesting wheat, and rounding up cattle.

But it’s not always that easy: If you don’t trade well enough and battle the jagged red lines across your balance sheet, you’ll go bankrupt and fail. Your difficulties as you play 1849 reflect California’s longstanding “make it or break it” circumstance.

1849 seems to be an accurate simulator in terms of its focus on 1850s city building, then. It’s also a compelling and, at times, highly challenging strategy game. However, its historical adherence could be brought into question— specifically, what it omits.

You do, at least, see some of the ethnic diversity that the Gold Rush caused through the varied (if slight) skin colors of your citizens. And, of course, the 1849 state constitution of California declared slavery illegal, so its absence is less of a sticking point … to a degree.

Despite its title, the 1850 Act for the Government and Protection of Indians encouraged the enslavement and trafficking of Native Americans as cheap labor for the mines, rather than outright killing them (the better of two evils, possibly). The Act also didn’t prevent the genocidal attacks on Native Americans by prospectors and ranchers that it was supposed to, with an estimated 120,000 slaughtered between 1845 and 1870 in California alone. That’s not to mention the thousands of Native American deaths caused by foreign diseases brought in by the stampede of immigrant prospectors to California.

You get no blood on your hands in 1849, commit no atrocities, nor do you even witness them. The sight or mention of Native Americans being slaughtered for the sake of saloon towns and large cities is entirely absent. In fact, Native Americans may not even be mentioned at all.

Of course, the focus of 1849 isn’t upon that. But it does mean that this “simulator” could be considered the fig-leaf edition of the California Gold Rush. It purveys the economic growth in California as entirely positive but gives no indication of the negative expenses that came with it, particularly to non-whites.

You can purchase 1849 by following the links to digital stores provided on the game’s official website.