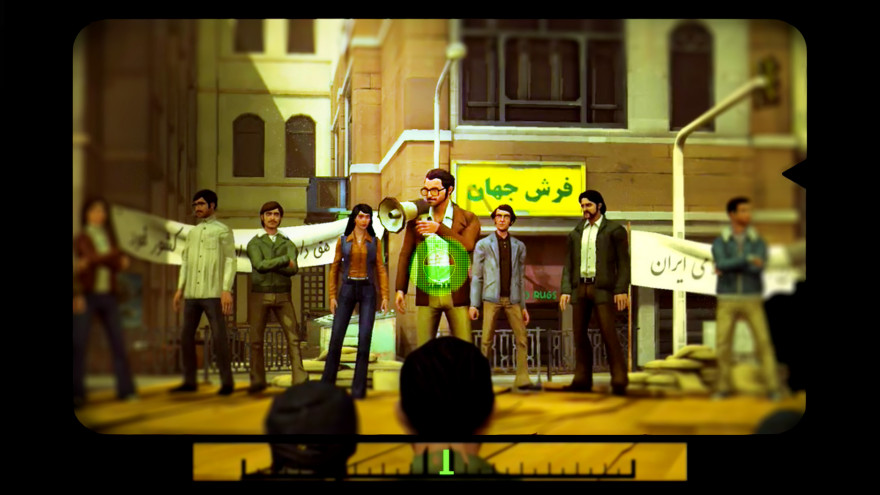 1979 Revolution, the adventure game series based on political events in Iran that year, will see its first episode released on April 5th. It’s something I’ve been waiting for since playing a demo of the game on an iPad at an exhibition titled “Sensory Stories: An Exhibition of New Narrative Experiences” at New York’s Museum of the Moving Image in July last year. I had primarily attended the event for the short films the Museum was showing on Oculus Rift, but it was 1979 Revolution that impressed me the most.


The demo I played followed fictional photojournalist Reza Shirazi as he covered the real-world Iranian revolution that led to the overthrow of the country’s monarchy, which replaced it with a new Islamic government led by Ayatollah Komeni. As Reza, I took photos of a crowd of protesters gathering in a city square as the situation escalated in an increasingly violent direction. The demo took place in the afternoon before the Black Friday massacre in 1978, in which armed troops fired into a group of civilians, killing dozens of protesters. That horrific event will be encountered in this first episode of the game series with subsequent ones going on to explore the rest of the revolution.

As its place in that exhibition divulged, 1979 Revolution is intended to expand the types of stories that games can tell. In an interview with our own Jess Joho last fall, the game’s director, Navid Khonsari, told her “In terms of content in videogames, for us, we feel like we’re creating our own little revolution.” He explained that while “games have broadened their design and audiences,” he thinks that “in terms of embracing the real world and real events, we’re only at the tip of the iceberg.”

a game about the difficulty of reporting events like this

Hence, for 1979 Revolution, Khonsari and the rest of the team at iNK Stories have combined historical assets, documentary content, and graphic novel elements. The idea is to provide an “authentic, historically accurate” recreation of the events leading up to and surrounding the revolution. Within this, you have to try to unearth the various stories that arise from different groups of people. It is, more than anything, a game about the difficulty of reporting events like this, especially in the Middle East.

Someone who can speak to that difficulty is Al Jazeera America’s Dorothy Parvaz, who like Khonsari, moved away from her original home of Iran when she was 10 years old, only two years after the revolution. Since then, she’s gone on to cover a number of wars and local conflicts, but eventually found herself captured by local rebels while covering protests in Syria in 2011. Her capture was part of an effort to control the story that she would tell through her reporting. Funnily enough, there’s a scene in which 1979 Revolution‘s photojournalist gets captured and interrogated. Through him, we, too, will have to face weighing up how we cover the revolution against protecting ourselves, just as Parvaz did.