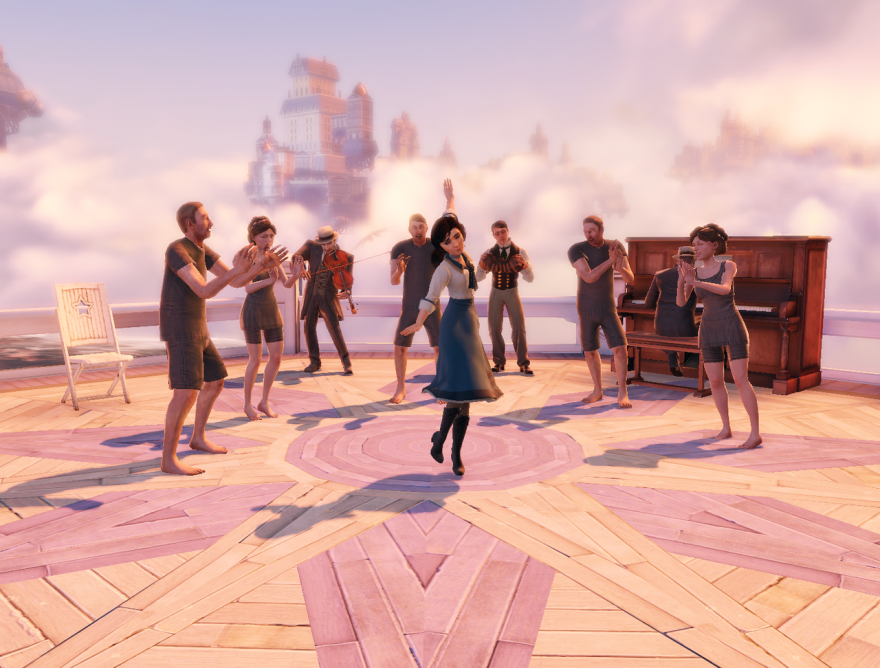 BioShock Infinite is not unique in having an unlockable difficulty mode, by any means. They’ve become more or less de rigueur for major titles, and I’ve never quite understood why. I don’t think I’ve ever played one; the idea of “the same thing, only harder” just doesn’t appeal to me. And for the most part, the games themselves seem to agree—they call the difficulty levels something like “Insane” or “Impossible,” with the clear implication that these levels are of interest only to madmen.

If nostalgia is the pain of coming home, then where, precisely, is home?

But Infinite’s offering in this arena struck me as something different. 1999 mode is named for the year System Shock 2 came out, and hearkens back, in theory, to a time when games were different. It aims to recapture the challenge of System Shock 2, a particular kind of difficulty from which, it supposes, gaming has long since moved on. It is, in short, an elegy to the good ol’ days.

The thing about elegies, though, is that they require the elegiast to decide what, exactly, has been lost. If nostalgia is the pain of coming home, then where, precisely, is home?

The minute I see the replicator, I feel it again. It’s like I’ve always been right here, the replicator facing me at the end of the hall, the walls opening into the cargo bays on either side. Stacked on either side of me are a half-dozen protocol droids in crates. The madness of Xerxes has turned them into good-natured walking bombs that want nothing more to greet me to death. I’ve been dodging them for the past ten minutes or so, and now they are stacked around me like volatile cordwood.

And I feel it again, fresh and visceral, a fear fourteen years old, a fear that’s never really gone away.

1999 mode wouldn’t be just about having less ammo, less money, more, harder enemies—it would be about choice. Real, permanent, choice.

What 1999 mode aimed to bring back, according to Irrational Games avatar Ken Levine, was permanence. Specialization. The BioShock games have all offered some sort of upgrade system, and there were certainly limitations. You couldn’t upgrade everything. In Infinite, upgrades for weapons and vigors both were purchased with money, and money was plentiful. There were no consequences for unwise upgrading, because if you spent your money unwisely, it wouldn’t be too long before you made more.

1999 mode wouldn’t be just about having less ammo, less money, more, harder enemies—it would be about choice. Real, permanent, choice. Each of the player’s decisions would commit their character to a certain path, opening some possible paths and closing others. In 1999 mode, characters would be specialized.

The cargo bays in System Shock 2 each house their own special terror, and this replicator is both their hub and their entry point. It is one of the few spots where I feel relatively safe, able to regroup with some degree of confidence that I will not be consumed, exploded, squashed, shot, neutralized, or flash-frozen by a psychic monkey.

I check the replicator. It’ll sell me chips, soda, basic pistol bullets, or a hypo to protect me against radiation. The problem isn’t ammo, though. It’s that my guns aren’t in a condition to fire more than a shot or two. With my current repair skill, I could probably fix the pistol if it jams, but not the shotgun. If I had a maintenance tool, though, then I could maybe ward off a jam for a while longer, buy a few more moments of passage through the claustrophobic charnel house around me.

Fortunately, most of my (extremely) limited upgrades have gone into my hacking skill, so I can try to coax the replicator into giving me more stuff—including, maybe, a maintenance tool. Except that investment has meant that I haven’t yet been able to upgrade my Cyberaffinity stat, which would make doing so easy. If I try the hack and fail, the replicator is shot, well beyond my ability to repair.

So how do you make upgrades feel more decisive in a game like BioShock Infinite? How do you make choices permanent and irrevocable, when the same currency buys upgrades, ammo, healing, and resurrection? The answer—sadly, but perhaps inevitably—is that you make less money available. And you make it so that that money is more valuable, too—such that you need it for more things. Like, maybe players have to decide between an upgrade and ammo, or an upgrade and healing—so you make it so there’s not quite as much ammo out there, so they’re more likely to need to buy it. And the upgrades should be important, too, so that players can’t survive well without making some of those hard choices—so maybe the enemies are harder to kill, and maybe there are more of them.

And so very quickly, the mechanisms of BioShock Infinite cause the idea of “permanent, character-altering choices” to become “less ammo, less money, less healing, and more, harder enemies,” and causes 1999 mode to become just another “Impossible” difficulty level.

I am very nearly dead. The five crates in front of the replicator held, mostly, nothing, and the few stray bags of chips I found in them are long-since eaten. I’ve fortified myself by guzzling the sodas I find on many of the parasitically-controlled post-human monstrosities, but they’ve done very little to restore me. I have a med hypo or two that will help me recover, but they take a while to work, and they’re all I have for real (read: unexpected monkey) emergencies.

Around the corner, I hear the pneumatic clank of a security mech making the rounds. I’m pretty sure he won’t make it this far. I’m pretty sure that the protocol droids ten feet away won’t get up and attack, either, just like I’m pretty sure that if a hybrid is coming to kill me, I’ll hear its desperate, yearning calls before it gets to me. The anxious, taut-elastic constriction right behind my collarbones, though, is there because I have been wrong about all of these things before.

I remove the spongy mass of viscera from my pack and begin to eat.

My computer chimes happily at me. It has completed its analysis of the red lump of worm flesh I found. This is an annelid healing gland, it tells me. Lots of science-y language suggests that it might heal even a human.

I do not hesitate. I remove the spongy mass of viscera from my pack and begin to eat. My horror is eclipsed by my need—but only for the moment.

If 1999 mode fails, it fails because it chooses to remember the wrong things. Certainly, System Shock 2 is harder than BioShock Infinite—or at least, differently hard. A lot of the challenge of games from the ’90’s has been lost. The careful and conscientious mapping and logging required to keep track of a game like Ultima VI has been replaced with the golden rope of the Fable games. The pixel-by-pixel hunt-and-click of old adventure games has given way to waypoints and floating text and sparkles over objects you can interact with. My harrowing journey through the Cargo Bays of System Shock 2 was made to find the combination to a lock. This, too, BioShock Infinite remembers bizarrely. And while perhaps such advances make things too easy, I find little to mourn in these losses.

If 1999 mode fails, it fails because it chooses to remember the wrong things.

What was new in 1999—what System Shock 2 and Half Life had that the games before them did not—was character, story, emotion. Quake had no characters. There was nothing in Hexen that made me feel. The fear I felt in System Shock has stayed with me this long in part because it was so unfamiliar. Hearing relationships between characters play out in audio logs, watching the ghosts of people I’ve gotten to know play out their last moments, the gut-deep punch of horror at the fleshy seduction of The Many—these are the things that make 1999 worth remembering.

And it is these things that BioShock Infinite inherits. It is the offspring of those first glimmers of understanding that games could be art, and it bears its heritage well. Elizabeth dancing on the pier would never have existed in the games of the early ’90’s. Finish the game and watch it again. The way you feel–how long it takes you to stop watching–is 1999 mode.