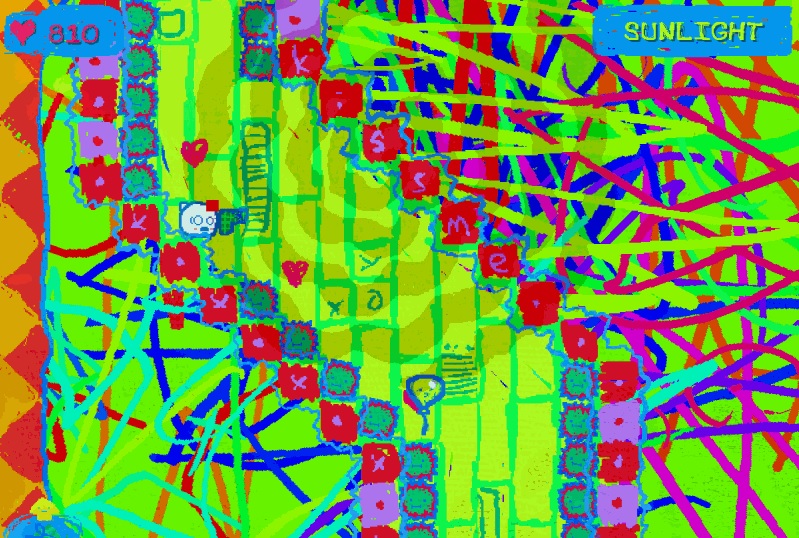 It took Hubol Gordon two years to assemble his largest game to date. He aged from 16 years old to 18 years old, living through the ups and downs of two of life’s most formative years. School troubles, emotional turmoil, sexual realization, existential awakening; these years are a chaotic mess hall of exhausting teenage politics. That’s not the same for everyone, sure, but upon playing Hubol’s 2D metroidvania aptly titled 2, you piece together a psychologist’s understanding of his mind, and it’s bursting with these volatile topics.

hiding inner pain and passionate disarray under its endearing quilt.

It’s as if the game is a notebook or a personal diary. The art is scribbly, mostly consisting of fidgeting lines of moody colours. If it looks messy then it’s supposed to—it’s not formed from a lack of artistic skill but is a personalized aesthetic. Erratic circles of lipstick reds and blinding yellows describe energy and excitement in areas like those titled Field and Sunlight. The music bops with a catchy beat and randomizes with squeals and scratches to complete the emotion. The game’s liveliness hardly ever subsides, with even opening chests turned into a mini-game featuring boxing gloves and button-mashing punches.

But it’s not all naively joyful and adorable. You can feel Hubol’s anxieties underneath many of the single-screen compositions, not metaphorically, but through their tactility and honest expression. An overarching theme seems to be masking over hurt. Some of the first enemies you’ll see reside in an otherwise joyful area where they recite the words “PLEASE KILL ME” over and over.

The sounds of you taking damage or killing the other smiling creatures around you leads to another distressing subversion of the gleeful platformers we’re used to. Usually, jumping on an enemy’s head results in a satisfying popping sound, but in 2 it’s the deafening screams of a child that ring out. It drives the idea of this world’s presentation hiding inner pain and passionate disarray under its endearing quilt.

You have no choice but to get close and intimate with the private spaces of 2 as progress means finding hidden passages that can only be found by rubbing your character’s body against the walls. The map in the pause menu encourages this type of action by indicating that you’ve missed a desirable item in a specific room.

What I find most appealing about 2 is that it clearly couldn’t have been made by anyone else, or at any other time. It captures emotions and frictions in Hubol’s life that may not have existed before, and may not again. Freud would have loved to analyze 2 as an interactive gateway into Hubol’s mind, especially the dream room devoted to the love of his mother, and the boss fight against Papa. And he should love it, too; it’s delightful in its sincerity.