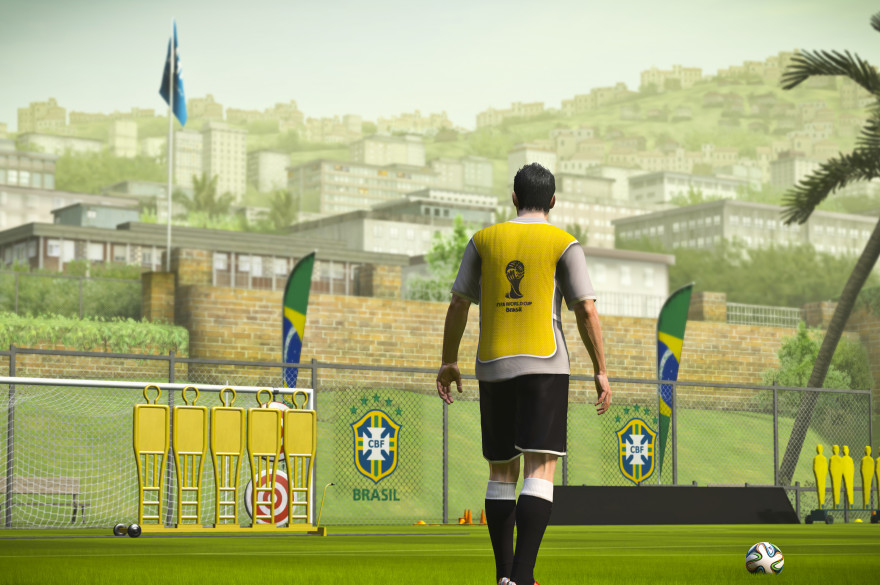 Playing FIFA World Cup Brazil is an exercise in interrogating one’s own expectations when it comes to soccer videogames. After years of being conditioned to appreciate and master the intricacies and complexities of ball dribbling, timed-crosses, and expertly placed through balls, through EA’s FIFA series, the latest World Cup installment boasts a significantly more cartoonish approach to the game of soccer. It’s both a blessing and a curse; shooting and passing are easier than before, and the game benefits from an increased pace and energy driven by the newfound looseness, but it also lacks polish and detail, never rising above a middling attempt at recreating the global hysteria produced by one of the world’s largest sporting events.

If there’s a redeeming quality to all of this, it’s that the game has the potential to bring people together. Specifically, the game’s learning curve, in part because of the reduced complexity of the controls, is not as steep as in previous years, which means that the is game accessible to FIFA veterans and newcomers alike. Also, unlike the other entries in the FIFA franchise, there’s little focus on managing a team, which typically involves player purchases, balancing skill sets on a squad or wondering if you have enough strikers up front.

Instead, the game strictly focuses on the World Cup and a handful of matches leading up to it. Sure, you can take control of any country you wish (including those that didn’t qualify for the big event in 2014) and lead them from qualifying matches to the grand stage, but the real thrill comes in competing against friends or online opponents. It’s somewhat refreshing to see a game focus on one mode of play instead of indulging in every bell and whistle it can produce.

Ultimately, though, the majority of FIFA World Cup Brazil, when played alone, is a solitary and underwhelming experience. The game feels patched together; the carnival theme that permeates the game from title screen to in-game action, meant to be representative of the World Cup festivities taking place in Brazil, is hokey and overwrought. For instance, if you score a goal for Team USA, you’re treated to a cut scene of avid soccer fans cheering outside of the U.S. Capitol while watching the game on a giant outdoor screen. It’s both tacky sentimentalism, a token nod to the supposed inclusivity of the sport, and a hilarious misnomer for the general attitude towards soccer in North America.

An empty, meaningless celebration of the sport’s inclusiveness.

It’s this sentimentalism that’s perhaps most irksome about the game, and it only becomes more predominant the more you play it. Once you’ve played through the World Cup, there’s little else to be invested in here. There are no stakes; no salary caps to manage, no players to resign. And maybe that’s a good thing, for a while, because it’s one of the few sim-like sports games in a market flooded with difficult titles. But once the initial rush of simpler controls and more on-field action wears off—and it happens quickly—you’re left with an empty, meaningless celebration of the sport’s inclusiveness. FIFA World Cup Brazil is then, perhaps, perfectly representative of its real life counterpart. It has the potential to bring people together, but it’s also a lot of pomp and circumstance in the name of “unity” that masks the political and cultural tensions that come with the event.