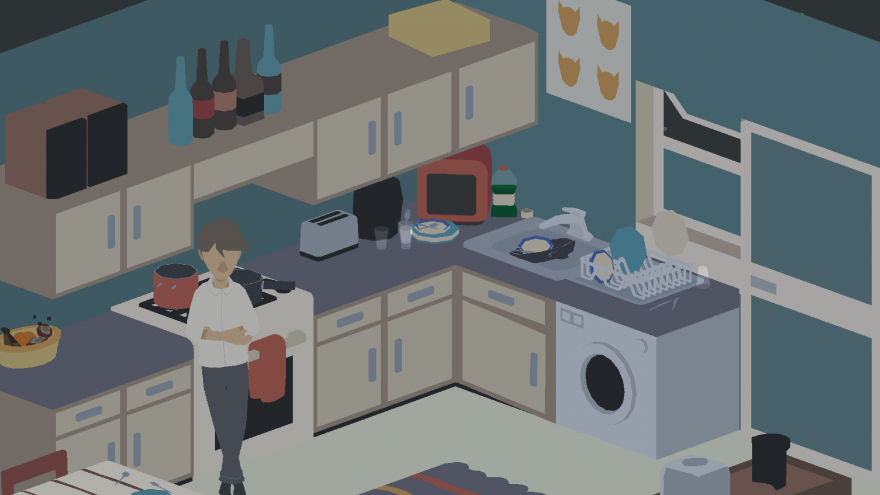 Something is off in a flat in South London. It’s not necessarily in the vegetables growing rot on the kitchen counter, or the new Guillermo Del Toro-inspired roomie, or the soft sounds of banging that seem to radiate through paper-thin walls. It might be a combination of those traits, the malaise of the freshly graduated combined with the claustrophobia of apartment life.

29 is an upcoming “semi-autobiographical magical realist point and click, focusing on two transgender non-binary people,” Ao and Bo. The characters are loosely based on the creators of the project, Tom Davison and Hana Lee (also the creators of Friary Road). 29 is meant to be viewed as the first chapter in a larger work that’ll be called “No Longer Home,” one that will further explore the concepts of this initial game as well as the characters gender identities.

a finely illustrated work that unfolds like a diorama

“We’re not interested in using gender as part of the plot or have Ao and Bo defined by them, but instead it being just part of who they are,” they write, “Bo and Ao both use they pronouns and while showing the game at events we’ve had many people misgender them. We think things like this show why it’s so important to have our genders represented in media.”


There is something, not an unease but an otherworldliness, that perpetuates the piece—a finely illustrated work that unfolds like a diorama around the subtle sounds of a cat’s purr. This unnatural/naturalness follows through in the crafting and design of the apartment and characters, the “flat-shaded colours” that call to mind a recent appreciation of Tom’s of the work of Eran Hill and the psychogeography of place. Hana points to the characters in Pan’s Labyrinth () as an influence: “you can easily familiarise yourself with the monsters to the point where their existence feels natural.”

You’ll be able to play a beta version of 29 on itch.io soon.