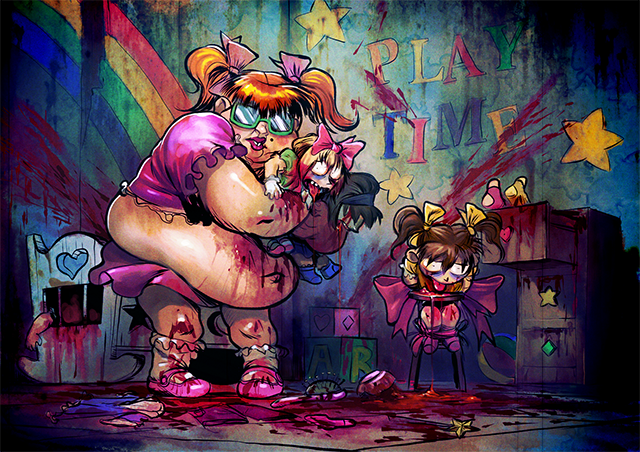 You know when a horror game or trailer for a game pulls out the creepy little girl lullaby music, it’s a sure sign that shit’s about to get real—too real. 2Dark, the next project from creator of the classic Alone in the Dark series, Frédérick Raynal, knows his game is supposed to be a hokey, fun-scary time. The title in itself connotes a self-indulgent humor: being alone in the dark isn’t great, but apparently 2 isn’t better than 1.

being alone in the dark isn’t great, but apparently 2 isn’t better than 1

The trailer presents a classic band of characters from various horror subgenres. There’s the criminal profiler, Mr. Smith, who just wants to make the world a better place for all the kids out there. Then, there’s the kids, who are little more than helpless, kidnapped props for the protagonist to assert his skills and “good guy-ness” over. Finally, there are the monsters: namely a pig man (named Lewis) with a hankering for butchering ala Texas Chainsaw Massacre, a mad doctor (or pediatrician, I suppose),  and an oversized baby woman in a tutu. The gangs all there!

In our previous coverage of 2Dark, Malachi Lakey describes how the “game’s characters and objects are modeled in three dimensions, but rendered in two, giving it a distinct sort of plasticine or Playmobil aesthetic.” Similarly the childish aesthetic of 2Dark, coupled with the unadulterated horror of the situation, strikes an interesting juxtaposition. Though you are cast as the hero, saving all the children, 2Dark doesn’t appear to overpower you either. There doesn’t appear to be guns. And your main course of action is sneaking past all the horror in the mansion, scooping up kids and escorting them to safety while a bunch of murderers traipse about.

Doesn’t sound like my ideal father-son or father-daughter outing, but I’m sure it’ll bring them closer together. Oh Halloween. Aren’t the holidays great?!

There’s no information on a release date yet, but the beta is already happening now.