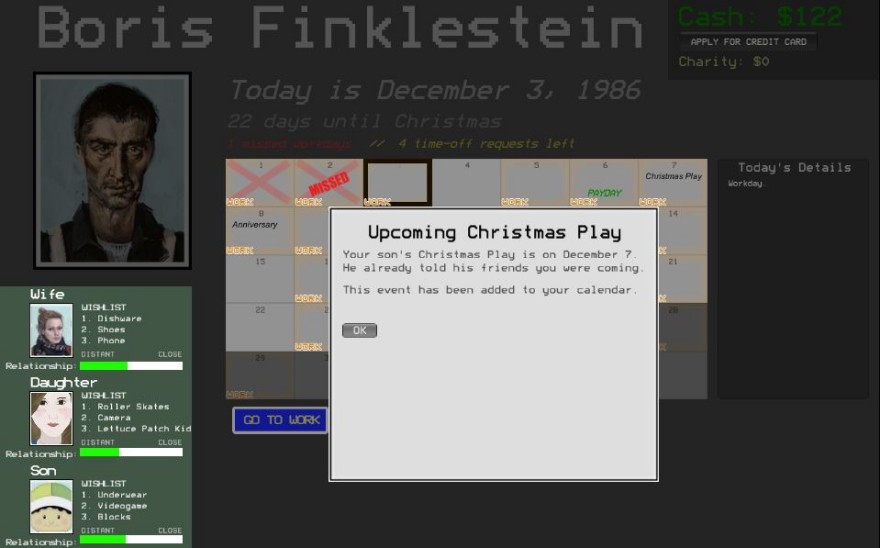 action hero Arnold Schwarzenegger is an impossibly well-sculpted average Joe and father attempting to acquire the hottest action figure of that Christmas season for his son. That’s the plot to the 1996 Christmas comedy movie Jingle All The Way, otherwise known on the internet as the film in which Schwarzenegger shouts, with an aggressive Austrian twang down the receiver of a public telephone, “Put that cookie down! Now!”

It’s a movie that plays for laughs the unsolicited pressures that the all-devouring commercialism of the developed world throws upon parents in the dreaded month of December. It’s the month that any and all income must be sacrificed to the superstore gods lest you endure the soul-destroying disappointment of your family for the entirety of the following year.

These rules aren’t written anywhere, but they’re followed in a step-by-step process every year, as if they were commanded subliminally by a higher force. It starts with adverts booming in itemised format the inventory that must be acquired: gadgets, clothes, and toys. The audience of children, now mesmerized, turn with hopeful eyes to the adults responsible for their well-being. The adults know then what must be done. So they rush, all at once, to the nearest and farthest shiny-floored marketplace with green bills clenched in fists, ready to punch or pay depending on the level of competition.

This all happens in a routine way, and Jingle All The Way finds some of the absurdity and desperation that can be found within it. Except, well, it doesn’t come close to depicting the woes of Christmas shopping as a regular parent at all. And, to be fair, it doesn’t try to, as there wouldn’t be much to laugh about in that version of the movie—it wouldn’t even star Schwarzenegger. Proving as much is Joel McDonald’s “dad-at-christmas sim” 33rd Street, which he made last year for the Holiday Game Jam, and has released by itself this year to, in his words, “help people get in the Christmas spirit”.

is the Cart Life of Christmas videogames, that McDonald’s perception of the “Christmas spirit” must be a wretched ghoul that steals from impoverished children. Your attempts in the game to manage the paltry budget of low-income restaurant chain employee Boris Finklestein is exhausting at best, miserable and hopeless at worst.

Most of your time is spent staring at a calendar that exists to tell you, among other things, when a supermarket is having a sale. It’s always on a working day, which is no surprise given that you have a six-day working week hanging over you. So your mission to surprise your family with Christmas presents is always a compromise: do you miss work to hopefully pick up a TV for your wife at half price, or do you keep your job so that you can pay your rent in a week’s time? Then, let’s say you took the day off to get that TV, you may find yourself having to fight another despairing dad for the last TV stocked on the store’s shelves. Is it really worth all this? But you cannot ask this question, as it is your duty as a loving father to treat your family to a slice of commercialism’s ideal image of Christmas.

With all these stressful decisions to make, it won’t be long until you get to thinking that it would probably be best that you keep hold of your dank and dirty flat, and the only job that you can hold down, instead of spending your meagre dosh on unncessary material goods. And that right there, buried underneath the bludgeoning stresses of it all is ‘s bittersweet message: value the company you keep and everything you already possess this Christmas rather than the gifts you may receive.

Yeah, it’s the common sentiment found in most Christmastime fiction. But the difference with  is that it has you crawl through the real miseries of modern poverty and its bedraggled father to get there.

You can play 33rd Street for free in your browser on itch.io.