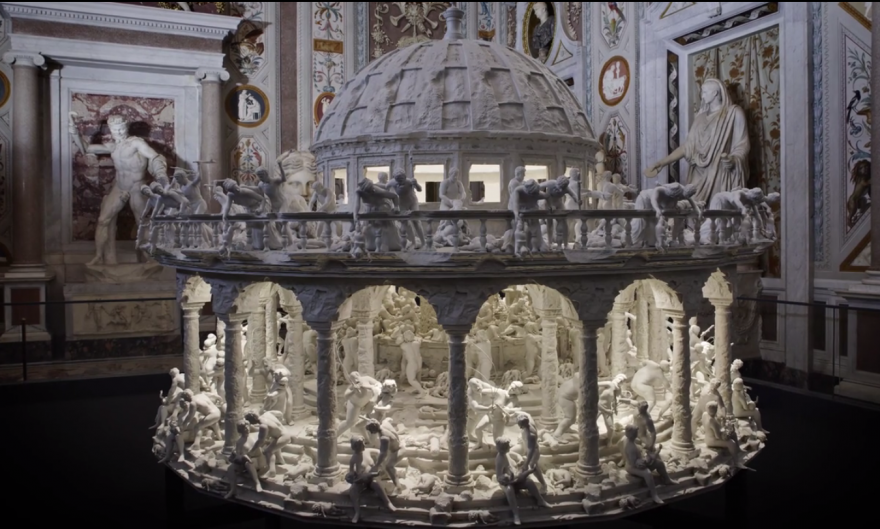 Before Miyazaki, Disney, or much of what can be deemed modern animation, there was the zoetrope. Popularized in Victorian Britain, the zoetrope is a circular device upon which a series of frames are either painted or affixed. If spun at a sufficient speed, these frames appear to be in motion. In effect, the device is a flipbook merged with a carousel.

Zoetropes are no longer necessary. There are far more efficient ways to create an animated sequence, and therein lies the zoetrope’s charm. To wit, here is a 3D-printed zoetrope designed by artist Mat Collishaw, and modeled by Sebastian Burdon:

You may notice that this is an unusual zoetrope insofar as it is both a figurative and literal carousel. It is set in a circular pavilion in which the outer colonnade serves to delineate each frame. At first glance, the moving sculpture appears to be little more than a carousel: there are children moving round-and-round, after all. The beauty of this early form of animation, however, is that the children aren’t simply spinning in circles; they are being subjected to a biblical onslaught.

easy to imagine it being soaked in blood.

Dubbed “All Things Fall,” this zoetrope is based on Peter Paul Rubens’ “The Massacre of the Innocents.” Rubens painted two versions of “The Massacre of the Innocents.” He invested the better part of a year in the first (1611-12) and about twice as long in its lesser follow-up (1636-38). The 350 figures in “All Things Fall” were created in a comparatively brief six months. In any other context, that would be viewed as an involved process, because that’s what it was.

When in motion, “All Things Fall,” like Rubens’ paintings and the biblical episode that inspired them, is all about infanticide. One can see children being tossed out of windows. Elsewhere, soldiers and parents fight over their infants. Though Collishaw and Burdon have created a zoetrope that is entirely white, it is easy to imagine it being soaked in blood.