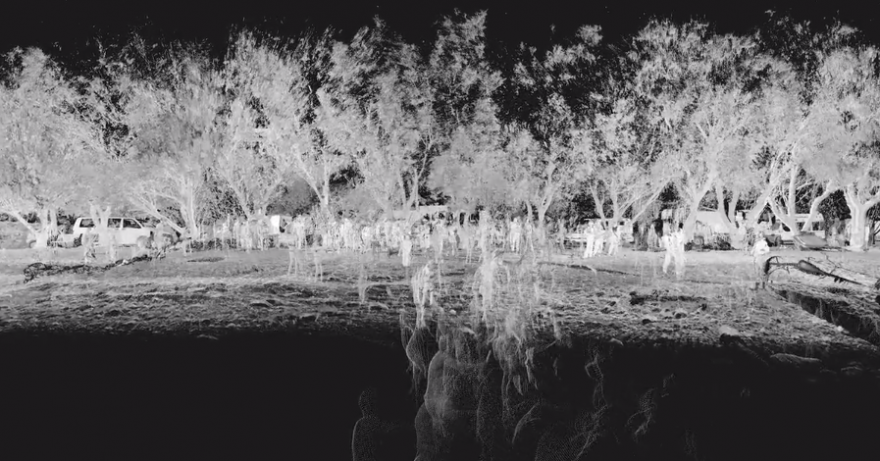 The refugees in London design collective Embassy for the Displaced’s video “Where the Land Meets Sea” are not moving; they have already moved. That is why they are on the island of Lesvos in Greece. They might want to keep moving, but they are stuck on Lesvos. That’s the problem.

“Where the Land Meets Sea” conflates formal visuals and political points. Embassy for the Displaced used 3D laser scanners to capture models of scenes on the island. These scenes, rendered in black-and-white as often as in color, are not entirely lifelike yet they still represent—however incidentally—political realities.


One cannot help but note that the apparatuses of the state—boats, men in uniforms—look incredibly heavy when scanned and rendered in three dimensions. This equipment has the sort of heft that a scanner can pick. Refugees and their tents, however, take on an ethereal lightness in these renderings. Some of these materials don’t even register. There are holes and gaps that the technology cannot fill. In that respect, Embassy for the Displaced’s technology choices accentuate the symbolism of the scenes captured.

Don’t you think they want to go somewhere else?

There is no movement in “Where the Land Meets Sea,” but it is heavily implied. How do you think the refugees came to be on the shores of Lesvos? Don’t you think they want to go somewhere else? Were it not for the quirks of geography, transportation, and the European Union’s Dublin Regulation, which requires refugee seekers to request asylum in the first members state they reach, do you really think a disproportionate number of refugees would choose Lesvos? But here they are. They are undeniably here. The implications of “Where the Land Meets Sea” are no replacement for actual testimony—more refugees’ voices need to be heard—but they are an interesting complement.

The stillness of Embassy for the Displaced’s work is also an interesting complement to the ways videogames have treated the refugee crisis. A videogame narrative requires movement. Even if much of what happens during a refugee crisis involves stillness—life in liminal spaces; camps; waiting—those are not really events that can be captured by a game. On its own, “Where the Land Meets Sea” may go too far in the opposite direction, but it is nevertheless a necessary corrective.