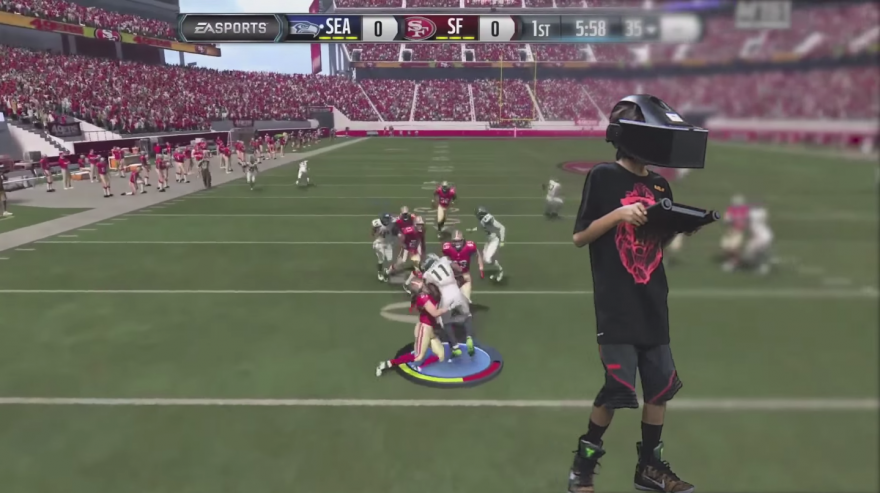 The internet has been positively aglow with ridicule of the 3DHead in the past week or so. The enormous headset was unveiled as an “Oculus killer” at CES last week, and, if a “killer” is supposed to be the diametric opposite of the thing it purports to kill, the 3DHead fits the billing. Its name is blunt, where Oculus Rift felt thesaurus-thumbing; it is bulky, like a child’s toy, as opposed to increasingly sleek and phone-like; it is virtual reality, where as this is, like, a screen you wear. A month ago, Reddit users were already on the device’s case, but The Verge ably encapsulated the ridicule with the headline “Billionaire Alki David is trolling CES with an insanely terrible VR helmet.” The gist is that David is a vaguely insane rich person with a history of money-blowing stunts (streaking in front of Obama, etc.) and terrible tech ideas, and that this gigantic plastic monstrosity represents his stab at co-opting the Oculus Rift’s hype.

The specialist site Road to Virtual Reality published an article entitled “Everything you need to know about the 3DHead ‘Oculus Killer’ Headset.” The entire article was three words: “It’s beyond bad.” (They later followed it up with an interview with 3DHead’s embattled COO.)

All of which is fair. This thing is outrageous! But, as I wrote last year after stumbling around GDC for three days and having a variety of virtual/real panic attacks, “We may or may not be entering an age of virtual reality … But we are unquestionably entering a golden age of shitty virtual reality.” I had just spent time strapped into the startlingly terrible Virtuix Omni, a sort of diaper-harness-treadmill, and the Sulon Cortex, in which I stumbled about a hastily constructed room with a cellphone strapped in front of my eyes while a man yelled at me. A few months later, a British man in a linen suit accosted me outside of E3 and made me try out his cellphone-helmet; it too was a dysfunctional, disorienting, vaguely amazing experience, at once laughable and profound. The 3DHead builds upon this rich lineage of terrible, huckster VR, but differentiates itself with a form factor to match.

I had a conversation recently with a game developer who is committed to building a museum of all the iterations of the Oculus Rift devkits. As a piece of technology, each is independently remarkable, with its own set of foibles and properties; these brokennesses illuminate new shades of gray in the inchoate medium. Someday, all of these steps toward that ideal “virtual reality experience” will probably be lost. But the designs themselves are also gloriously bizarre, in their own, subtle way, as we move ever closer to some sleek, unobtrusive optimum headset.

The proper lens through which to to view the 3DHead, then, is as one of those antiquated machines we love to marvel over. Consider, for example, the Caproni Noviplano, a flying houseboat of sorts that got 60 feet in the air before soaring to the earth in what must’ve been an astonishingly radical crash.

Or this Victorian-era bathing machine, a sort of dressing room that traveled out into the water and let women dive into the water through a tube such that no one would ever see an inch of their bodies.

It, like the Noviplano or 3DHead, finds transcendence precisely because of its preposterousness. The then-contemporary cartoon (NSFW?) below points at how one might subvert it.

Such subversion is the name of the game for VR right now. Its most promising ideas are those which break our current notions of videogames; that we will come to it for slower, more meditative experiences, not thrill rides, for example. I get why 3DHead is funny. I mean, it is called 3DHead, and it is essentially being backed by a cartoon bad guy. But let’s give them a break. By so brazenly illustrating how terrible VR can be, they are as exciting as Oculus Rift is. It’s a delight to remember that we live in an era when technology can still be messy.