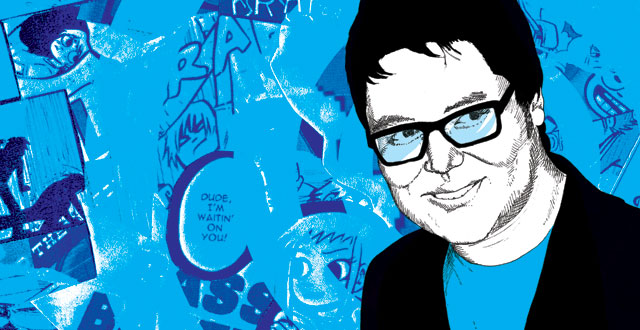 As you may know, we’ve partnered up with Pitchfork to do a variety of things, big and small. One of those is borrow! The 5-10-15-20 format is something they dreamed up more than two years ago to ask musicians about music that moved them at five-year intervals. We’re doing the same for videogame people. First up—Scott Pilgrim creator Bryan Lee O’Malley, who’s been blessed with the trifecta of comic, film, and game for his cast of pugilistic outcasts.

AGE 5
I don’t have any strong memories of my early childhood. We had an Atari in 1984, and the only game I remember is Missile Command. I think we got it at a garage sale. There’s nothing like it—just a stick and a button. I do have tactile memories of the rubber.

The TV was in my parents’ room, so we were only allowed half an hour at a time. I remember it being in the corner, and we would sit on the floor. I remember pastel carpets. We lived in a brick-house bungalow in northern Ontario, in a remote mining town. It was very flat and suburban, but I have fond memories of winter. It looked like the Arcade Fire “The Suburbs” video.

AGE 10
This was early ’89. We got our first PC around that time. I remember my dad coming home with a pile of computer games, and my mom was not that impressed. My dad spoiled us. I remember King’s Quest III and IV. KQ4 was the first with fancy resolution, and in KQ3, you’re slave to a magician. At 10, it was this baffling world.

For KQ4, we got a hint book, but there are some parts of that game that are terrifying. There are these charcoal pixels in that cave section, and it was so scary. Really it was just the tiniest bit of sensory input. I responded to the minimal-input thing, because I always recoiled when games became more realistic—the same with comics. Marvel might as well be triple-A games—just painted action movies on the page. For the comics, the lack of color was a plus, but you would see people arguing about Rhea’s hair color. She doesn’t have a hair color!

AGE 15
See, this is interesting. When I usually talk about games, we always talk about Nintendo, but we’re skipping over my NES era because I didn’t get one until I was 11. That was pretty late into the cycle. Anyway, when I was 14 or 15 and the NES was over, I didn’t have an SNES, so I was back on PC games. I played a lot of real-life Dungeons & Dragons in my teens, and Unlimited Adventures is basically a dungeon-mastering, RPG-maker type of game. I would write stories and make up games. My little brother and I were constantly on it.

I was obsessed with Street Fighter II. My brother was 10 and he could kill me at any fighting games. The other game was Quest For Glory IV. I guess it was the storytelling and getting lost in the world. They seemed more complex than the Nintendo games that were concurrent. Nintendo games just hinted at stuff. Mega Man 2 and 3—they had story on the periphery.

I got my first job at 15, so I felt like I was free. There was this used game store, and I bought a Sega Genesis for Super Street Fighter II and then I got an SNES. All I had was Super Metroid. I was a kid who spent all my time at the library and when I turned 14, my mom went and asked if they’d give me a job. I was not the best library employee because I was always handling the merchandise. The staff would find me reading somewhere.

AGE 20
This would be 1999. This is the PlayStation age. Rollcage was one—it’s a future-racing game. This was an age when videogames could eat my life up substantially.

I went to university for a bit, but dropped out because I was failing. But I had Final Fantasy Tactics and StarCraft. There was the internet, too—it was a center of my life. I had more friends on the internet than in real life. I spent that time traveling, and I’d go to Toronto and hang out with my internet and StarCraft friends.

When I turned 25, I got married and was working on the first volume of Scott Pilgrim, so that was the end of the videogames-eating-my-life phase.