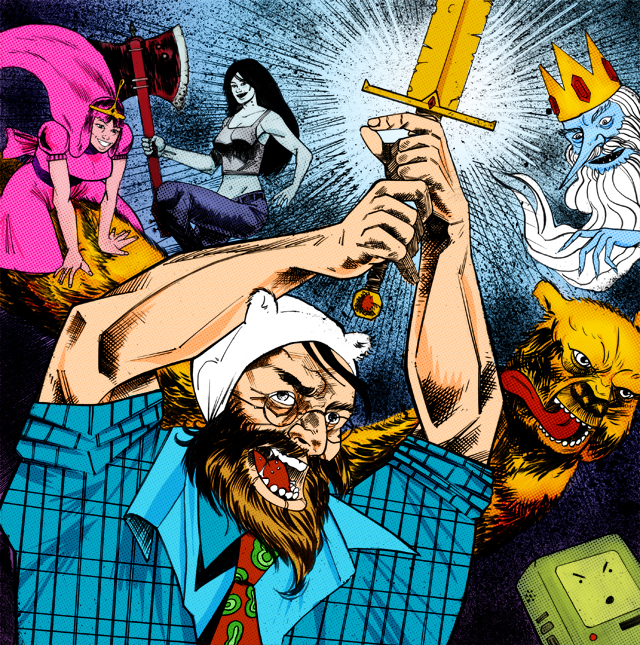 This round of 5-10-15-20, we’re talking to Pendleton Ward, creator of the show Adventure Time on Cartoon Network, whose characters get up to—dare we say—some damn fine classic videogame-inspired adventuring.

Age 5
As a kid I loved Altered Beast on Sega Genesis. I love the bear stage where your superpower was to turn ant creatures into stone statues. I thought that was the coolest.

As an adult, I’m super-bummed that my nostalgic good-time memories of playing as a buff anthropomorphized fox that shot Street Fighter hairy-ookens is now so close to the wackiest fetish—where people dress up in carpeted googly-eyed anime animal suits and do lord-knows-what. *Long sigh* … bummed … I’m bummed about that.

10
Friday the 13th on NES scared the math out of me. I was turbo-terrified while playing this game. It was also super-confusing: you would be running through the woods, and sometimes Jason would be chasing you.

What scared me the most was the music. Just YouTube “Friday the 13th Nintendo” and click the Jason-death-ending video right below the Angry Video Game Nerd review (he doesn’t like it). Forty-two seconds in, after the Jason battle is over, listen to that crazy tense music. My little boy heart was beating so fast. On Adventure Time, for a couple of episodes, I asked the composers to reference this music for tense scenes.

Also, The Simpsons: Bart vs. the Space Mutants on NES was the worst. You played as Bart, and aliens were turning things in Springfield purple—or was it that purple things hurt the aliens, so you had to spray-paint things purple, or turn them purple somehow? I know as much about what was happening in that game now as I did when I was a kid.

At one point in the game you could use a payphone to prank-call Moe. I always enjoyed that. Man, that game was so difficult and confusing, but I still replayed the first level over and over because … I love The Simpsons.

15
As a teenager I played the hell out of Myst. I loved how the game let you stay in the world after the final cut scene, which I did! I’d cruise around the islands listening to different looping atmospheric sound effects … lots of wind and ocean sounds. It was a great escape for me. I read the Myst books, and was all about the idea of creating portals to real worlds by describing where you’d like to go on a page of magical D’ni paper.

Years later, I played the multiplayer online sequel, Uru. Where most games with customizable character creation end up railroading you into creating babes and hunks, Uru only let you create the nerdiest of turbo dorks, all running around wearing khaki shorts, sun hats, and tight “CYAN WORLDS” T-shirts. That was nice.

I’m googling “Uru” now, and WHOA! Looks like Uru is free-to-play now. I’m gonna do that when I get home.

20
I’ve always been into modding and creating games. In my early 20s I experimented with a program called GameMaker. I would go to diners, stick six Post-it notes together on the table and design levels for my games over lunch, then scan them in and play my Post-it note levels in the afternoon. A guy named Cly5m made some GameMaker games that stuck with me. He made one called Velella that tried to capture the feeling of flying through dreams. It was never finished, but you can download a demo of it on Cly5m’s website. It’s really cool.

I used to Google for free MMORPGs. My friend Pat McHale and I used to play one called Blade Mistress. In the game you can only play as super-buff ladies with enormous sparkly swords. My character in the game was named Susan Strong, which later became the inspiration for a character in Adventure Time.

“You got it!! Yeahh!! Everybody drink Pepsi!”

25
I think Pepsiman on PlayStation was the best videogame experience of my life. Pepsiman was Pepsi’s mascot in Japan circa 1995, and he was a can of Pepsi in the shape of a man that vomited Pepsi out of his mouth like a fire hose. He’s awesome. In the game you slide and jump over obstacles collecting Pepsi cans until you reach the end of the level, where a crowd is waiting for you to hurl Pepsi all over them.

The best parts of the game are the cut scenes. They’re of a fat American guy who’s been watching you play Pepsiman from his TV set in his crummy apartment. He gets really excited when you beat a level, and he’ll say something like “Pepsi for TV Game” or “Pepsi for Pizza.”

I could only beat the game with my friend Colin Fleming. We had to hand off the controller to each other during the last level because we were each better at certain parts. It was so hard. We were screaming when we beat the game; then the American guy came on the screen and started screaming with us, saying, “You got it!! Yeahh!! Everybody drink Pepsi!” You can search for those Pepsiman cut scenes on YouTube, but it’s so much better seeing them after you’ve beaten each level. They’re so satisfying.

I’m glad I’m thinking about this. I might do something similar for the Adventure Time game when it comes about.