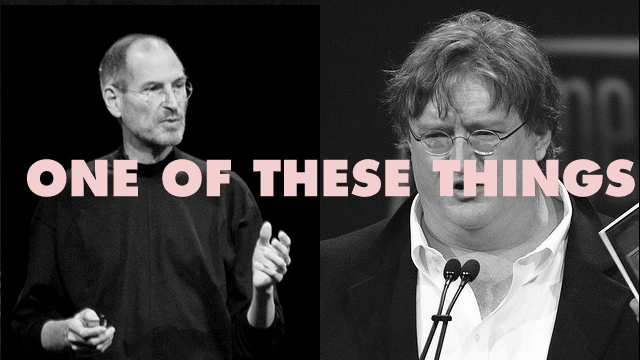 At first glance Gabe Newell and the late Steve Jobs couldn’t be more different. Gabe was a longtime Microsoft man, while Steve is synonymous with Apple. And if you follow the tech blog headlines, you know Gabe just confessed that Apple is Valve’s biggest rival. Moreover, their companies were founded on different philosophies. Valve supports open computer standards while Apple operates inside a closed ecosystem.

It’s like the I’m a Mac, I’m a PC commercials all over again.

But not so fast. When you think about it, the two men have a lot in common. Neither had much use for higher education. Steve dropped out of Reed College; Gabe, Harvard. Despite that, they both became innovators in the truest sense. How did they do it? By promoting a corporate culture that revolves around their casual personalities.

More than figureheads, they are personalities, and look like guys you could strike up a conversation with about the Redskins game or the rainy weather if you were waiting in line behind them at the coffee shop. Another thing they have in common: once you start using their products, you’re part of the family. You feel comfortable referring to them by their first names, as I am.

But the biggest commonality is that you’d expect none of this from a CEO of an incredibly successful technology company. We expect the type of mind that splits their customers into demographics, and from a top-down perspective find a way to crunch a profit — the Larry Pages and Mark Zuckerbergs of the world.

But you never get that sense from Gabe and Steve. Because of their experiential approach to technology — which focuses on what we want not as consumers, but as people — we actually get what we want. In Apple’s case, we get elegant, desirable hardware, with an easy to use interface, which would not be unfitting to give to someone as a Valentine’s gift. In the case of Valve, we get great games for a low price delivered without a hassle.

While a search engine is a device that makes our personalities technological, the innovations at Valve and Apple make technology personal.

It’s worth noting that Gabe didn’t say his biggest competitor was a Bethesda or BioWare but Apple, a company that doesn’t make content but delivers it. Gabe seems to be no longer thinking of Valve as a developing house, as the endless delays to Half-Life 2 show. Like Apple, the company has become a mecca for engineers, but not artists. Consider the recent departure of Portal creator Kim Swift, who is one of the game industry’s best talents. Valve makes products.

It’s in the way Valve pursues its ideas that draws the clearest comparison to Apple. Both honchos make the type of products they personally want or need. Both honchos make gut decisions based on what products they’d like to use themselves. When you saw Steve at a press conference demoing the latest iPod or iPhone, you almost got the impression that even if his projects failed — which they wouldn’t, but if they did — he’d take consolation in the fact that he had a device that was exactly what he wanted.

I get the same impression from Gabe. He didn’t like going through middlemen to sell his games, so he created Steam. Virtual reality goggles were something he was genuinely intrigued by, even though the market for them is a question mark. And it was a hassle to connect PCs to the flatscreen, so the Steam Box was born. They both understand, as Steve would say, “technology alone is not enough.” So far, it’s paid off.

This is to say both men have vision, and they stick to it, even when it goes against the expectations of pundits and fans. Steve was determined to go buttonless with the iPhone despite wide criticism. Similarly, Gabe experimented with biofeedback when the Wii’s Vitality Sensor was being scorned by hardcore gamers. And unlike BioWare, who caved and changed the ending of Mass Effect 3 due to an outcry by fans, Valve refused to budge on the subject of Left 4 Dead 2 when entitled players of the original said the sequel should be an expansion. It’s more than obstinacy. It’s resoluteness. It’s following a vision.

And the vision of Gabe and Steve is what makes their products appealing to us, not as users, but as people. Though you will often here of an “organized chaos” approach to business at places like Google, you never see much humanity in the results. While a search engine is a device that makes our personalities technological, the innovations at Valve and Apple make technology personal. Their successes grew out of an intimate familiarity with people. There seems to be no hard data to back up Gabe and Steve’s approach, only vision, and great things.