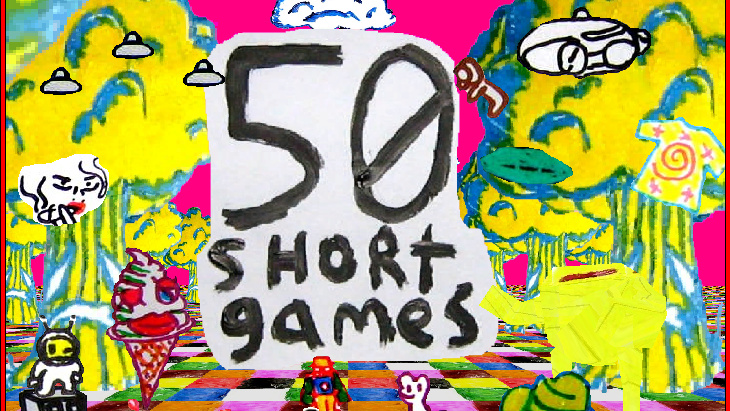 There are many types of games in 50 Short Games. There are games as jokes, games as criticism, games as existential toys, games as self-experimentation, games as broken half-thoughts muttered under one’s breath. There are games with houses full of mice, with a town enveloped in a poisonous gas cloud, with robots that fall in love because of emoticons in emails, with a burning drive to make Final Fantasy 35, with pulped humans that robots wear as skin, and with John Ford’s classic western, The Quiet Man.

Most of the 50 short games that Stephen Murphy (known as thecatamites) presents in this collection are drawn with blunt marker that’s sloppily copy and pasted. The games are rough and sharp, few lasting longer than a minute or two. Murphy doesn’t let any idea linger and become smooth. In a document that comes with the collection, Murphy explains his ideas were usually made the day they were though up, bringing to mind musicians like Robert Pollard and Lil’ B, no-fi artists who are unafraid of jaggedness in their work. This gives some games an urgency, a steam-of-consciousness flow. Anxiety World lasts a few seconds, but feels like a panic attack. The player has to use the mouse to move a pair of day-glo eyes around and avoid the abrasive imagery. It’s all overwhelming stimulus. Other games come off opaque and undercooked. Controid is a platformer that consists of three very short screens. It doesn’t say anything and is quickly forgotten.

There are standout games. FF35 is a caffeinated powerpoint love letter to the Final Fantasy series. Which Way is a point and click journey through a 4th dimensional funhouse. Operation Assailant is a string of gags about an incompetent super group trying to take down a faceless enemy. At one point, you can play as a cinder block.  All of these games were made from September until December of 2013 and are available for free. Alone there’s a weighlessness to them: they are played quickly and forgotten. But presented together in this collection they talk to each other. Themes and ideas loom over the body of the work, many of which hover over his other work. Together they create a self-portrait, but not of Murphy. This collection becomes about the art, the process, the influences, and the obsessions of the artist thecatamites.

Any argument for the collection also becomes an argument for Murphy’s games. This isn’t, sadly, a good gateway into his work. This is a b-side collection for the fans; it’s even presented with liner notes for every game detailing the thoughts behind them. It’s an artist’s statement that is honest about the failures in the work, which is, unfortunately, a necessary Rosetta Stone for the lesser games in the collection. This is not for the casual fan. In this collection I can see hints of Murphy’s earlier work, like Space Funeral, Murder Dog IV: The Trial of Murder Dog, Mystery Channel and Goblet Grotto (made with J Chastain). Like those, these games are dark and funny, alternating between macabre imagery and surreal anti-comedy. His work questions old videogame tropes, not in a jokey, meta way, but by substituting it with something much odder. These games get to the heart of the weird contradictions that have calcified and hardened as the 8-bit aged and became next-gen.

A few games in the collection retread this ground, but 50 Short Games is Murphy trying to grow and expand to new, weird places. These games are playfully experimental, and in that context, even the failures serve a purpose. 50 Short Games is a portrait of an artist in transition.