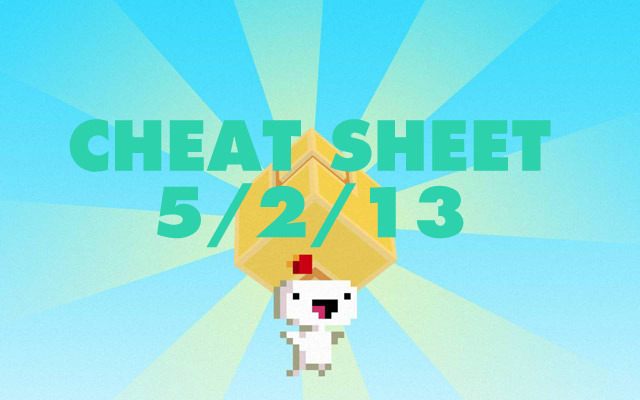 There’s a whole batch of spring season sales going on… why not donate some of that extra savings to a good cause? Good Game is a live-stream of everyday players, journalists, and developers playing and commenting on a spate of classic and modern games. It starts tomorrow, May 3rd, and goes all weekend long. Money raised will benefit the Boston One Fund, supporting victims of the April 15th Marathon bombings.

Also this weekend is No Quarter, the New York University Game Center’s annual exhibition featuring KS favorites like Hokra and BariBariBall. If you can’t make it, look at these posters and salivate accordingly.

Also in the category of NYC game design, Zach Gage has posted a prototype for a Blackjack-esque card game about dueling with your mortal enemy. The catch – you don’t want to just live, you want to be as close to death as possible. Quite daring.

On the opposite side of the spectrum: The next Call of Duty has been titled and teased, ladies and gents. Call of Duty: Ghosts will be out this holiday, with an official introduction at Microsoft’s Xbox reveal on May 21st. Watch the trailer below and wait for the parody follow-ups soon.

Speaking of tent-pole franchise sequels: Grand Theft Auto V is coming this fall, and Darren Aronoksy (director of Pi, Requiem for a Dream, The Wrestler) is stoked.

All those born after 1997, however, might have to wait to buy their copy. According to the Federal Trade Commision, turns out videogame store employees are the best in the biz at turning away under-age buyers of Mature titles.

Polytron’s dimension-jacking platformer Fez came out on Steam yesterday. You should play it if you haven’t. We liked it. And that music…

Robots will take over humanity soon enough; might as well learn how to program ’em. Do just that with Sparki, “The Easy Robot for Everyone!”