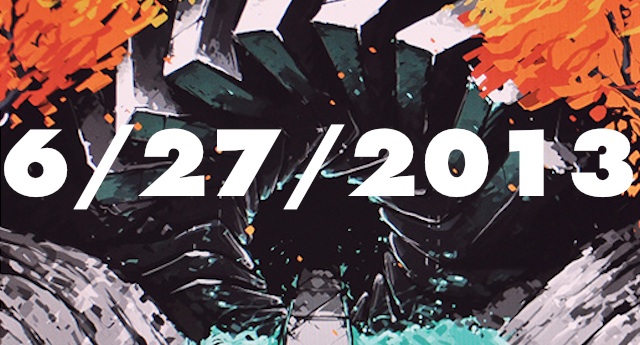 The creator of Kill Screen’s fave Hiversaires also DJs and he has a new album out. It’s really good, and not just good in that way you reserve for talking about videogame music.

Ever say to yourself: I’d really like to read 5,000 words on Sid Meier. Me neither, but if you had, it’s your lucky day.

For those of us who hate fireworks and pulled pork (I imagine that such a lonely, dyspeptic person exists somewhere), LIMBO will hit iOS just in time for the Fourth.

Barabariball is looking unbelievably awesome. Rated B for BOOMSHAKALAKA!

These guys have resurrected Amulets & Armor, an obscure dungeon crawler from 1997, which sold 100 copies and runs on DOS. Don’t stop believin’.

This zen-looking science installation lets you interact with mitochondria using a Kinect camera and a pair of Tevas. Yep, people still wear Tevas.

We came up with these verbs, you might say. Touching, kissing, licking. [And] the spiritual axis of male and female coming together sexually: connecting, unlocking, opening up, very emotionally conceptual.

—Tale of Tales on Luxuria Superbia, their upcoming, uh, cosmic love experiment, which sounds to be the Kama Sutra of iPad apps.

It’s said that Cricket Heroes is the most realistic cricket sim out there. But one must consider the competition.

Finally, we leave you with a small sample of the flummoxing Peter Molyneux quotes that participants in this year’s Molyjam, July 5-7, will use as inspiration to build their games. Seems a bit vainglorious.

“If this crashes the plane, me turning my phone on, so be it.”

“his purpose in life—like Asimov’s law of robotics—is not to aggravate you; Not to piss you off. His second thought is this: He absolutely loves you.”

“The whole of your body, except for your private parts, can be scarred.”

“We’ve got tons of graphs and data coming in, and looking at that is the most inspirational thing I’ve seen as a game designer, ever.”

“There is an acorn, and it is a golden acorn. We’re taking acorns to the next level.”