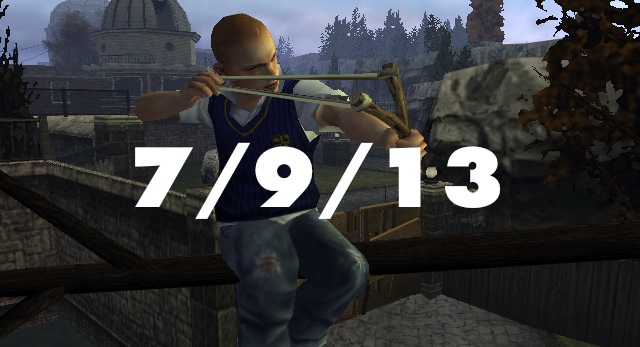 Good news. The Xbox One will group all those foul-mouthed 13-year-olds together, so us grown-ups who play on-line can game in peace and quiet. Ugh, seriously, I mean, who would’ve thought gamers chainsawing the Locust Horde would be so immature?

A lot of our discussions of what makes a bro eventually turned to, what would a ladybro be called?

—An amazing Bill & Ted-worthy comment from the creator of Broforce.

Being on The Wire sounds pretty much exactly like going to a public university. Via Slate:

Gilliam and Lombardozzi… hosted epic evenings of beer and video games, including Madden Football tournaments…. The games would run until 5 or 6 a.m., when half the players would have to depart for an 8 a.m. call. Lombardozzi [bragged]… “Yeah, man, what you do is push x, x, y, x, y, y …”

So does being a research subject down under, where researchers determined that those who’ve just played a video game are less likely to help others by picking up a dropped pen.

This footage of Hotline Miami 2/interview with a guy clucking in a chicken mask, yes seriously, is one of the strangest promos for a game we’ve seen.

The Bungie boss almost admits to secretly overclocking Halo’s pistol so he could win. Respect.

Speaking of, who says indie games get no respect? Rogue Legacy, ye old-school chivalric platformer, was written up in The Boston Globe, who then, er, went on to compare it to junk food…? Nevermind.

Google Glass has its killer app: grocery cart BattleShip! We can’t tell if we’re being sarcastic or not anymore.