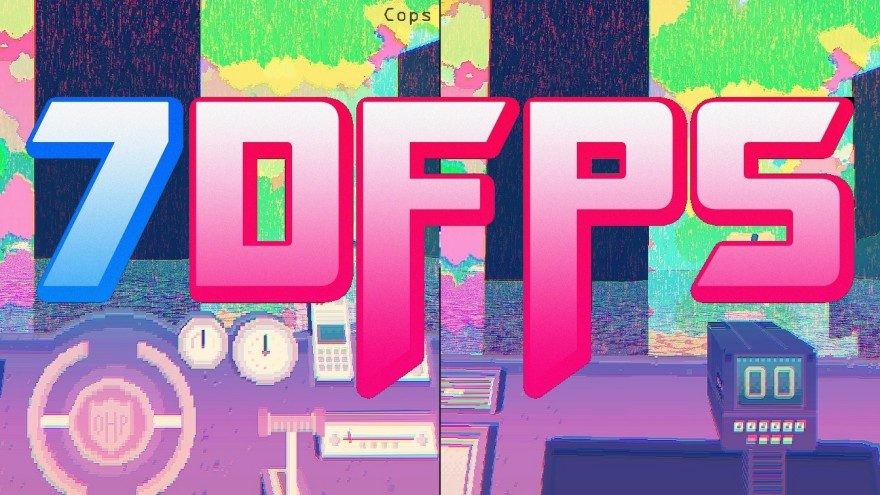 “S can stand for a whole variety of things…” Pietro Righi Riva, creator of Mirrormoon EP, proposes in the 7DFPS keynote. He’s referring to the “myth” that the ‘S’ in FPS (typically, first-person shooter) stands for “shooter,” and only that.

swap the ‘S’ in FPS for another word.

Whether or not any of those who participated in 7DFPS this year took Righi Riva’s proposition into consideration when creating there entries is unknown. However, if you were to play some of these first-person games you’ll find many that consciously swap the ‘S’ in FPS for another word.

Below is the second part of our 7DFPS roundup. Most of which do without shooting and, instead, employ surfing or sailing, or another ‘S’ word instead, and to a commendable result. Once you’ve played through these, see what else you can find in the rest of the 7DFPS 2014 games. 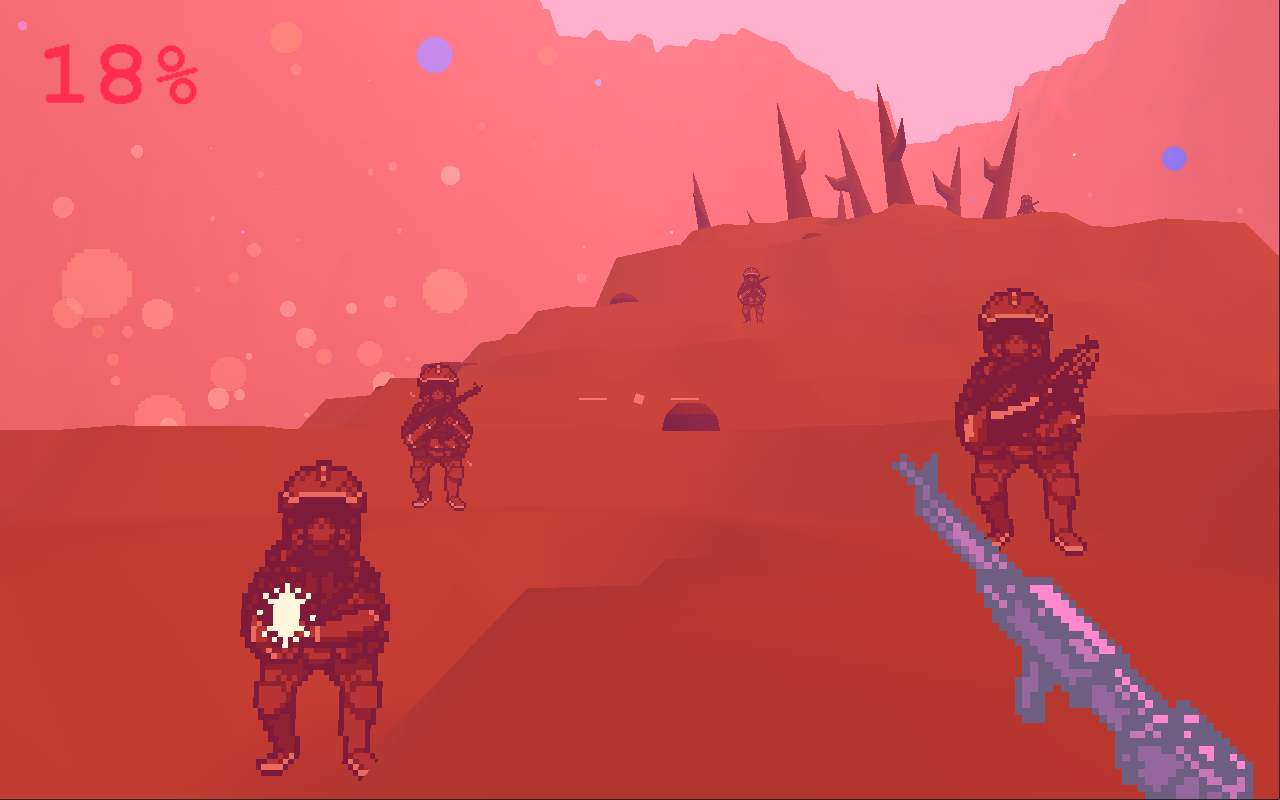 I know what you’re thinking. And no, I haven’t tripped at the first hurdle. Sure, that’s a screenshot of Frail Shells that contains enemies with guns shooting at a player who also holds a gun. It looks just like any other first-person shooter out there. I feel you.

But this isn’t what it looks like. I’m going to save myself by saying that Frail Shells is best described as first-person shellshock. It starts off with you being dropped off into a war zone by yourself, against dozens of enemy soldiers. When you eventually pick enough of them off, you can find your friend that you came to save, standing on a sandbank with a machine gun, recreating many a scene in Schwarzenegger’s many action movies.

But then the game switches gears entirely. You’re in bed, your alarm clock beeping you awake, and the noise of bullets and death is absent. It seems you’ve left the war zone to the past, your memories. But as you eat breakfast and go to work, the rifle comes back to haunt you, until…well, you can find that out yourself.

First-person surfing? First-person surfing! Why not? This is no seaside simulator, though. S for Surfing places you inside a Hawaii-printed vertical tunnel realized in sky blues and sunshine yellows. At its bottom is a pink pool infested with sparkling blue dolphins. A supersaturated, shimmering tune with a distinctly Japanese summertime twinkle to it brings sonic happiness to the scene.

Your goal here is to perform tricks to amass a numbered score. But there’s no insistence on adhering to this mission and no end. So you focus on creating waves by pointing a finger at the rosy waters, using your other hand to attract hoops and seaside icons to your board, bumping you up further into the air.

Before long you’re wrapped up in the saccharine feel of it all. Perhaps too much: if you spin and flip enough, bouncing higher and higher, you move through the borders of the tunnel and into the void. But the tunnel has a magnetic pull, yo-yo’ing you up and down in the fray, uncaring for boundaries and rules. You’re out of control and it feels great. That’s what surfing is all about, isn’t it? 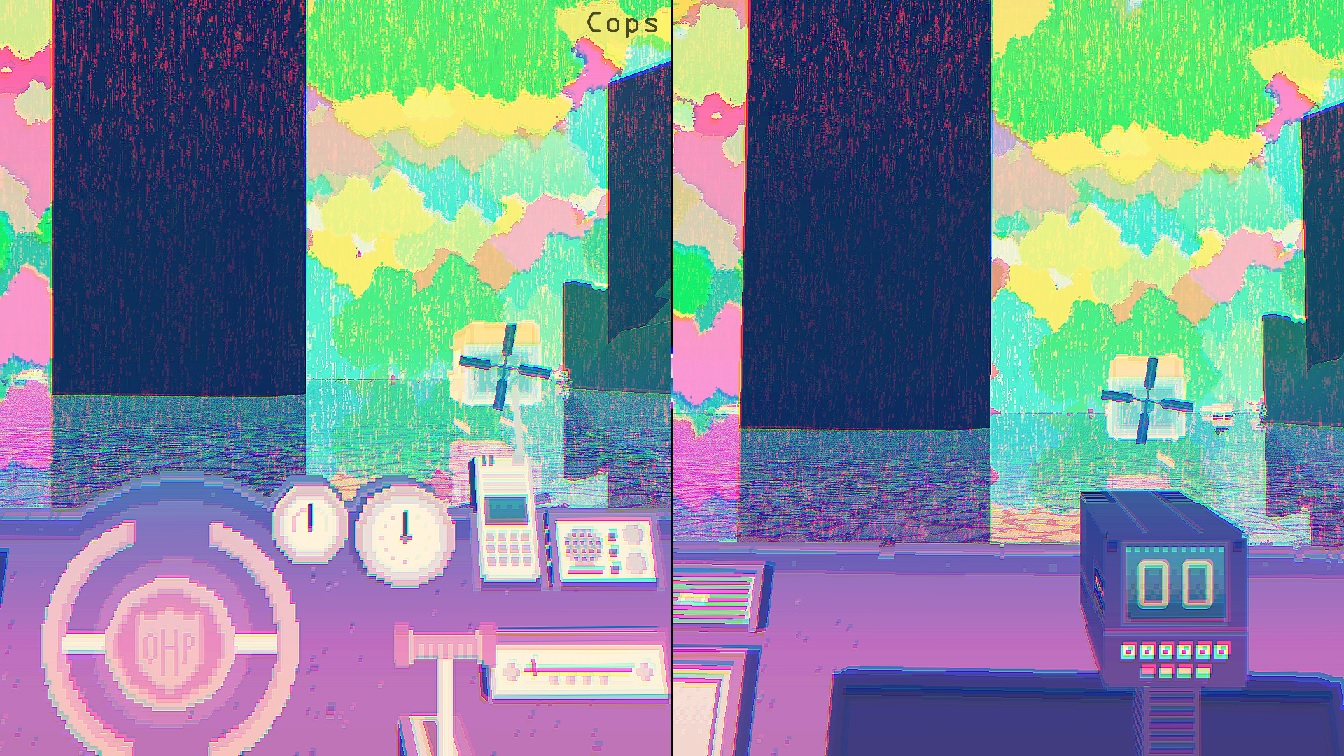 You and a buddy (or you can play it solo) are sea cops in Ocean Highway Patrol. You are looking for speeders, that is, people who are breaking the speed limit in their speed boats.

On the left, one of you has control of your boat with a wheel and accelerator. On the right, the other has a speed tracker and a gun. That’s all you need. You begin by finding the population of boaters for this day, presumably lured by the turquoise, pink, and green filter of this place. Once found, you watch them like a hawk, begging them to give you a reason to give chase as if your name was Dirty Harry.

Then, one of them does. The tracker reads “44” and your sirens instantly kick into action. You have no way to arrest this law breaker, and the only tool to hand is a gun. BANG, BANG, BANG. You shot the boat until it blew up. “Now,” you say, “who else wants to speed on these waters today?” 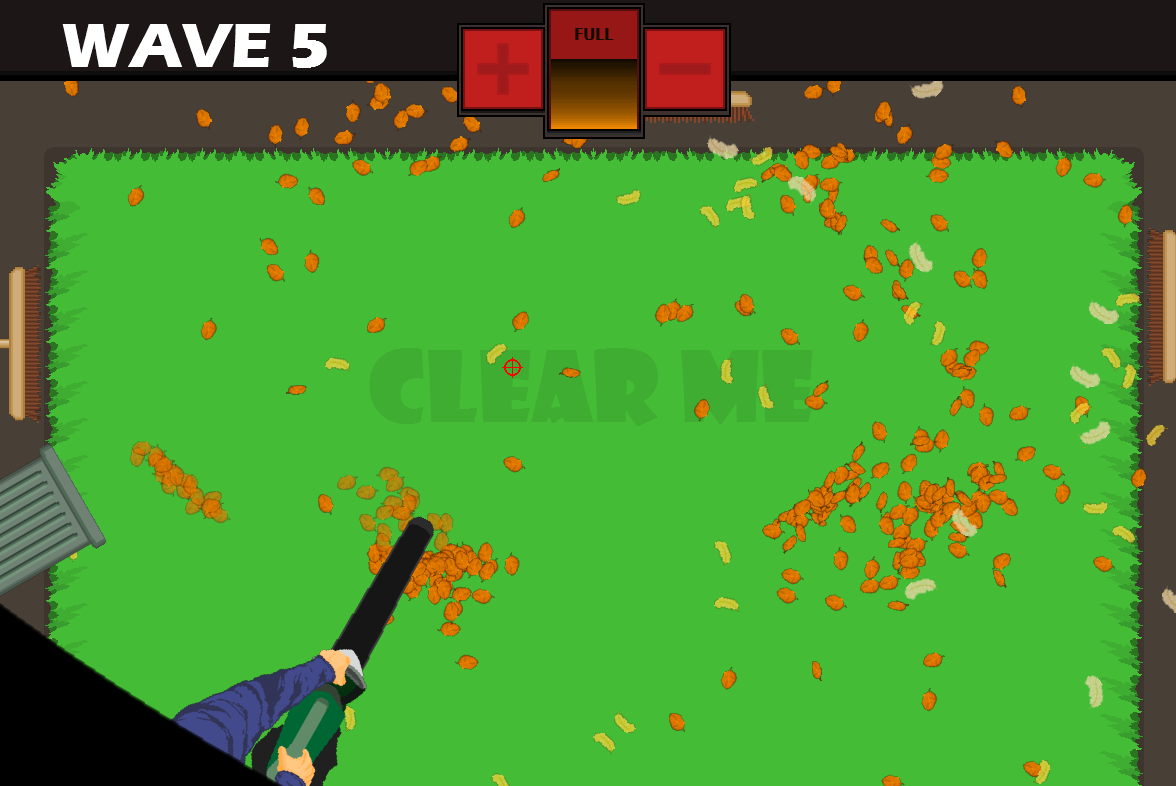 There are times in a typically mundane life when the opportunity to pretend you have a gun in your hand arises. One of those times is when you find yourself armed with a leaf blower with a whole army of leaves to blow away at your foot. In that moment, you can snatch the opportunity and become a war hero worthy of a whole chest of medals.

So you two-hand the leaf blower, start it up, and point its barrel to the ground. The leaves have no idea what they’re in for.

This is where BLADBLAZERS picks up. You’re given waves of leaves to clear from your lawn. Every now and then, just when you think you’ve cleared a decent hole between the autumnal colors, trash cans throw more on to the pile. If you’re the type of person who has to clean everything they see, perhaps even obsessive with it, this will scratch an itch over and over.

Oh, and there are also rockets in this game, but you’ll get to them later. 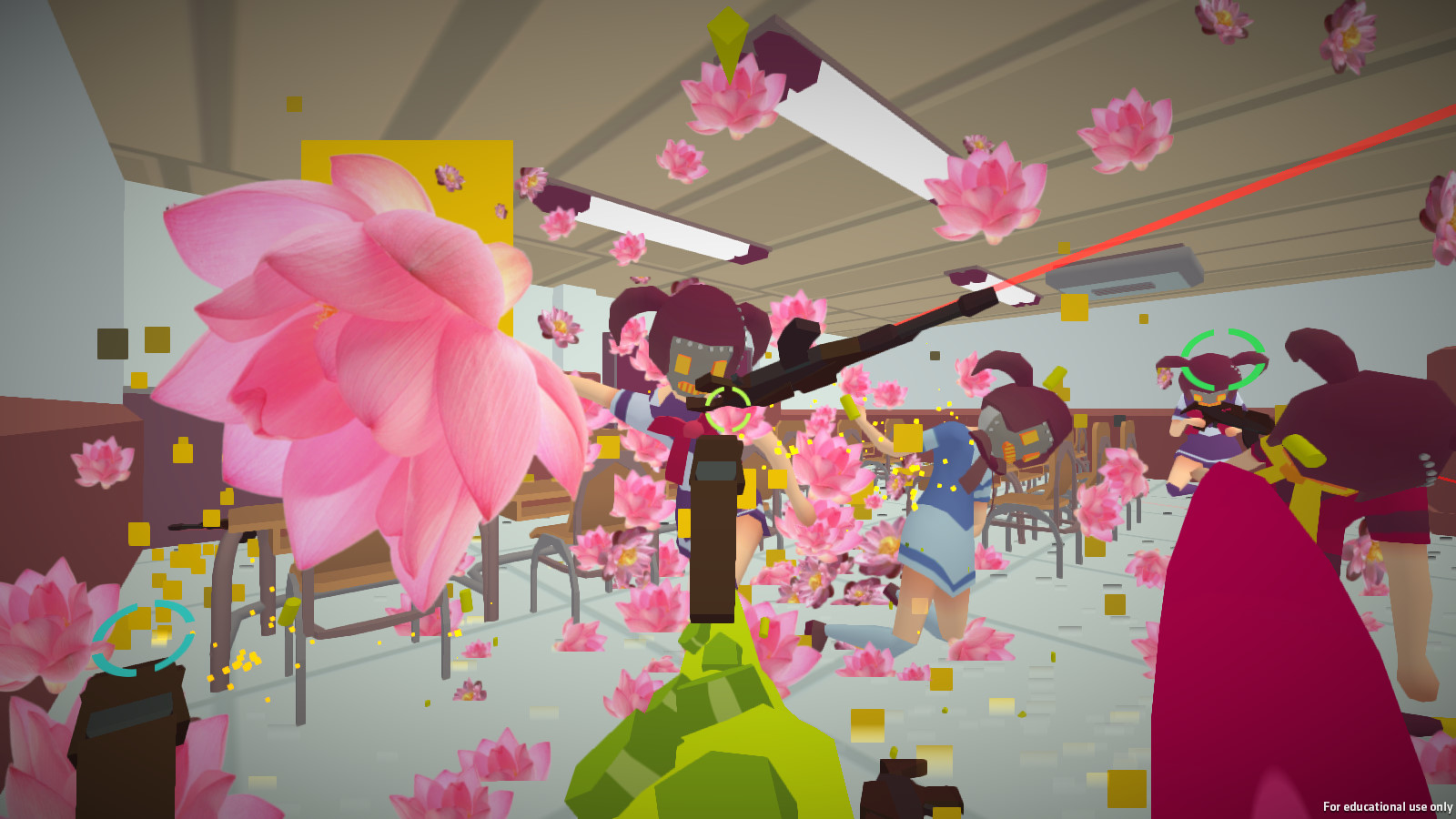 Bet you didn’t think of this one: first-person squid. Yep, imagine Octodad in a first-person perspective, but instead of chores you’re shooting robot schoolgirls. I can’t tell you whether or not this is derived from Japanese tentacle erotica. Maybe.

This is best played with as many people, and as many computer mice or gamepads, as possible. You’ll each control a single tentacle attached to the squid that you embody. These tentacles flop about weird and boneless as they should. When you’ve stopped staring at them out of gross fascination, you should find that you can use these tentacles to pick up the knives and guns scattered around the school.

Attacking won’t be your problem once you’ve armed your tentacle, moving will be. It turns out that you need to press both buttons to pull your squid body around. This is why it’s best to have a few of you playing it; one of you concentrating on moving, the others shooting the schoolgirls that attack you.

We finish up our coverage of 7DFPS 2014 with a game that you can play forever, if you wish. There’s no shooting here, only endless sailing and survival. You start where all journeys do: at home. Grab a bite to eat as you leave the door, and then leave it all behind as you hop into your own sailing boat.

As you sail with or against the wind, which varies your speed, you’ll cruise across the ocean as remote islands, arcs of rock, and empty settlements are procedurally generated. You can go wherever takes your fancy, getting lost whether you mean to or not, guided only by your curiosities.

You’re not entirely carefree, though. The gulls that call out above seem to act as warnings. The sky constantly pours thick droplets from the sky. It’s always gloomy here. The surroundings speak of their own harshness, preventing you from getting caught up in the pleasure of sailing on an ocean alone. And, indeed, you have to routinely stop off on land to find food and, hopefully, shelter for the night.