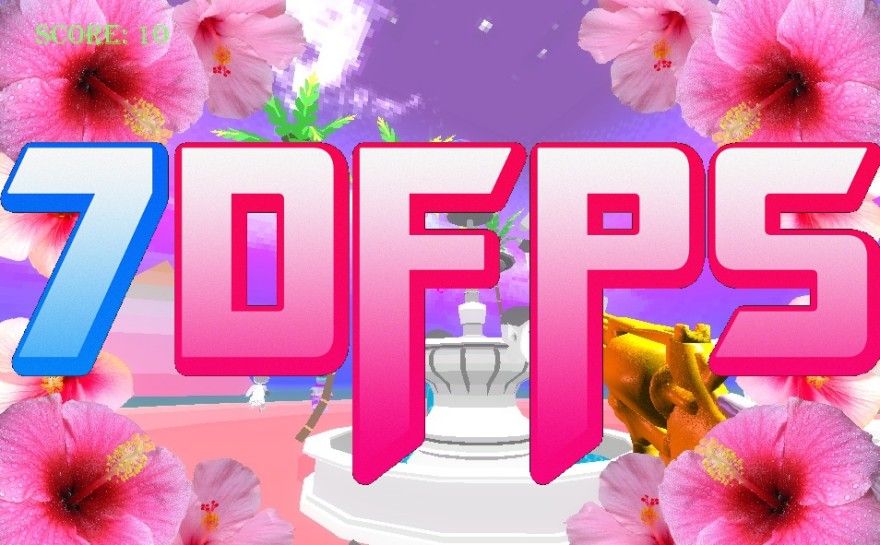 The mission that fuels 7DFPS (7 Day First Person Shooter) is one that desires to see what else can be achieved with the first-person shooter format.

For most of its existence, the first-person shooter has been restricted to shooting aliens, or Nazis, or another terrifying or despised Other. This is established and engrained within the genre so deeply that, for some, it’s near-impossible to imagine a first-person shooter as being anything that doesn’t reflect its past.

So a bunch of creators come together, or work by themselves, for seven days to create something wild and beautiful, something different, within the first-person shooter genre. Some of the games don’t even have shooting. It’s shocking, I know.

Previous years have birthed titles like the gun fumbling Receiver and the slow-mo bullet-dodging SUPERHOT, so this year we’re hoping to see what else can be done with a first-person perspective and a bit of imagination. Below is a revolver’s number of standout games created for this year’s 7DFPS, at least, out of those that we’ve played. Oh, and this is only Part 1; a second part is incoming.

Imagine if, instead of being confined to an island, the magical musical woodlands of Proteus unrolled like an endless carpet as you traipsed along it in wonder. That goes some way to describing Porapora, although it also dismisses its own pleasant idiosyncrasies, such as the polka-dot tree trunks and twinkling flower bunches.

Playing it comes with the feeling of being perpetually lost, but where there might be fear (this is the woods after all), there is instead delight and surprise. This is especially true if you make an effort to bump into the trees, and to walk over the darkened piles of leaves on the ground, as nature here seems to be short-sighted, reserving its sweet sounds until its sure of your presence upob physical contact.

It’s as if it knows how gorgeous its own pastel plumage is, and doesn’t want any old nature stroller to hear its song, only you.

Why shoot someone when you can have a more equitable contest of fisticuffs? Yes, let’s hearken to those times when disputes could be settled by messing up each other’s faces with knuckle-to-nose blows, rather than getting deadly. Considering the firearm was first invented by the Chinese in 10th century AD, that means we’re going back a long time.

Wing || Chun is a bare first boxing game played in first-person. That makes it similar to Beast Boxing Turbo and Zeno Clash. Except it’s more quickfire than those games, and getting the living shit beaten out of you is as disorienting as it should be here. You have to control two hands, moving them around the screen to block incoming punches (which you cannot anticipate), and throwing your own fists in at whatever angles you can find.

It’s not easy as winning comes down to blind luck. But even losing can be fun due to the psychedelic visual effects. Get punched enough and the whole screen spins into an indistinct blur, and new colors are added to the pallette, presumably due to a slipped optic disc. You’ll occasionally see a fist connecting with your face during this but won’t feel the impact. Not long after that it’ll be lights out for you until you try again. And you will, with a teeth-gritted determination.

You’ll need a gamepad to play this one.

Photobombing is one of those activities that has always been around (well, at least since cameras were invented), but the internet has since made it its own by giving it a name. The creators of Photobomb didn’t make a game about jumping inconveniently into the background of other people’s photos (although that might be fun). They’ve used it only as a pun.

In the game, it’s your job as a “Media Peace Officer” to scan images posted on social media in order to find out who planted a bomb that was detonated in a busy city center. (There’s the pun) While this may sound like a dream job to all you who are obsessed with crime fiction while also being a Facebook addict, it proves stressful.

You’re given a time limit to match up the photos on the left of the screen to your view within the 3D scene to the right. You’ve got to work fast and thoroughly to find the criminal among the crowds of people. If you don’t, you’ll end up killing the wrong person when the suspects are lined up for you to shoot after your time is up.

If this sounds like an inefficient and terrifying way to resolve crimes to you then you’re living in the right world. But, for the purposes of this game, this method works… just about.

Rather than taking the opportunity to see in what other directions the first-person shooter could be taken, Andy Sum decided to hold a mirror to what it already is with his 7DFPS entry. It throws a lasso around the hype culture, highlight kill montages, and product tie-ins that comes with, say, the Call of Duty series.

You take up your Mountain Dew Ghetto Blasta to perform “no scopes” on your enemies. To regenerate health you ingest copious amounts of Doritos and Mountain Dew. And every time you shoot an enemy to death you have hyperbolic praise of your skill thrust into your face, it ringing out in the form of a meme, gif, text, or sound bite. Usually it’s all four, it taking over the screen as a cacophony of energy. Sonic the Hedgehog runs across the screen to his theme tune, the sound of a loud and excited kid taken from a video clip shouts “oh my god!” and words such as “rekt” and “u wot m8” flash up.

At one point you enter a room in slow-motion, dubstep blaring in the background with a wobbly, grouchy bassline, and everything you shoot turns into a rainbow explosion. And that’s happening behind everything else that’s busy telling you how great you are, and how extraordinary this experience apparently is, it all turned up to 11 by this point, perhaps beyond.

The parody here targets the overstated achievements and power fantasy of the most popular first-person shooters. It ramps up their bombastic aspirations and how their players react to them with such aggression and dramatized celebration to an absurd degree. Funny thing is that in emulating these games it finds the same appeal they satiate, even outdoing them, becoming like a drug rush that you need again and again.

As with GAME OF THE YEAR: 420BLAZEIT above, IBISCVS SVNRISE wins most of its points on style. Rather than teenage guffaw, though, when you shoot your gold-coated revolver, pink hibiscus blossom from the sides of the screen. It’s a luxurious shooter in flower pinks and velvet purples; a floral décor, giving the impression of a ritzy and glam aesthetic.

There are multi-colored pyramids in the distance, a fountain at its center, and fancy Greek pillars at its borders. Your mission is less elegant and rich: shoot the cherubs that run about the place. Some of them glitch and teleport you to god knows where. This is a deliberate effect. The others physically blow apart into fragmented angelic bodies.

More is yet to be done on IBISCVS SVNRISE but it’s worth playing purely for aesthetic reasons.

Rather than shoot a gun, when pressing the left mouse button in Endless Express you look at the time on your wristwatch. If you wish to get back home, you’ll need to keep referring back to the watch as you attempt to parse a train timetable.

The premise is here that you’ve fell asleep on the train and wound up at an unknown train station, nowhere near your destination. It’s one of those nightmares that frequent travellers have, as I found out earlier this year while catching trains around Europe, mostly clueless as to where I was.

Speaking of nightmares, Endless Express is, well, it isn’t nightmarish as such, but it does have a dreamlike quality. I’d even go so far as to say it qualifies as magical realism. As you hop from train-to-train you’ll find that each train station isn’t… usual. They’re in the middle of lakes, or located in the treetops of a misty forest.

Whereas Kentucky Route Zero plays tricks with secret roads, Endless Express gives train tracks and their stations a supernatural quality. Being lost is adverse to your objective but it’s the most enjoyable way to blitz through the game.