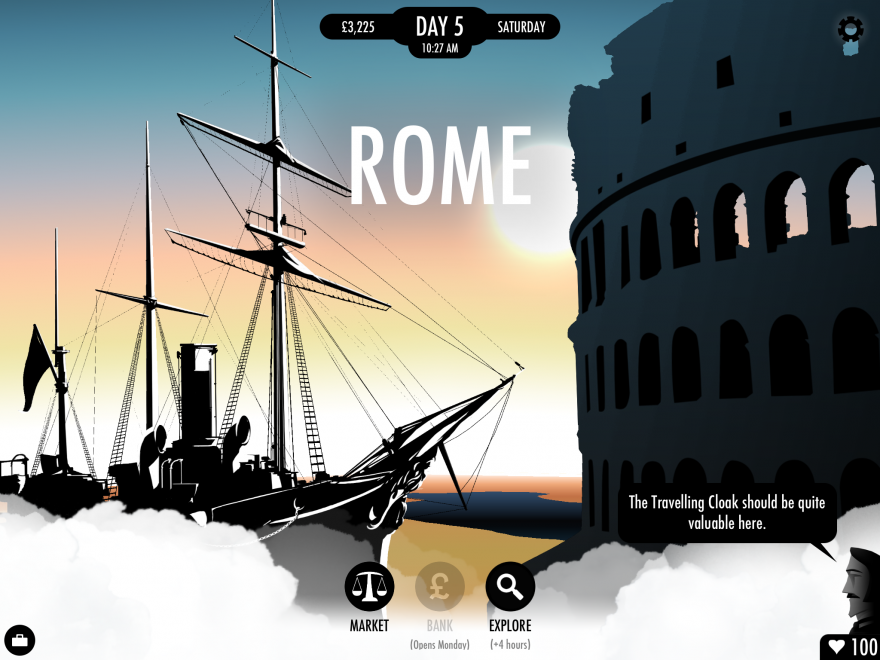 Inkle, the same creators of the epic interactive adventure Sorcery!, released their newest interactive experience in the app store this past friday. 80 Days builds off of Jules Verne’s classic 1872 tale of one man’s ambitious (and ludicrous) bet that he can circumnavigate the globe in just eighty days. Creative director and Inkle co-founder Jon Ingold credits Verne’s novel as being “the most perfect source material you could want for a game; it has the goal and score system in the title. It’s as though Super Mario were called ‘Go right’.”

In short, the concept of 80 Days is both simple and vast: “You go around the world, whichever way you want.” The core relationship between the two main characters, Monsieur Fogg and his trusty valet Passepartout, centralizes the grandiosity of this choose-your-own-adventure around the entire globe. The spirit of the original story fits perfectly with the format, too, since Verne’s tale is all “about uncovering the unexpected, and branching narratives are all about hiding details away like treasures to be found.”

80 Days is a whirlwind of unpredictable delights, dangers, and consequences. As Passepartout, you are given dialogue, routing, and pacing choices which vastly alter the journey. As Ingold says, these choices contrast the more recent trends in decision-based interactive fiction, which all seem to be “about difficult moral decisions, or gut-wrenching trade-offs, as though every narrative choice has to be life or death in order to have value. For me, the draw of interaction is the sense that the story is happening right now, in real-time, around me.” A few life or death choices still crop up in 80 Days, but their dire nature stem more from the unpredictability of the game. “I think Verne would have approved of that. His novels are full of risk—shipwrecks, moon rockets, dinosaurs—but they’re joyous, too.”

The Art Deco style of the game’s design was, at first, a point of contention, since the setting takes place decades before that style’s invention. But Joseph Humfrey, Inkle’s other co-founder, believes that this is a minor discontinuity, since the style was used only as a starting point. “The colour palette is bright and vivid, and doesn’t attempt to evoke 1930s nostalgia, or papery, painterly textures that defined the media at the time. Jaume, our illustrator, did a beautiful job of realising [our writer, Meg’s,] fantastic vision of an alternate 1872, with mechanised camels and underwater trains. And that’s the point—it’s our own version of 1872, so the design reflects that. We wanted it to be modern, vibrant and refreshing, even in 2014!“

And yes, there are a few more discontinuities there—for example, I don’t remember Around the World in 80 Days featuring any mechanized camels.

80 Days straddles an artfully blurred line between historical accuracy and the fantastical, by essentially putting the era’s technology boom on alternate-reality steroids.

That’s because 80 Days‘ adds a zest of steampunk and sci-fi to Verne’s novel, courtesy of Meg Jayanth’s script (one rumored to clock in at a resounding half a million words). 80 Days straddles an artfully blurred line between historical accuracy and the fantastical, by essentially putting the era’s technology boom on alternate-reality steroids. Jayanth says that, aside from the history and fantasy, “there’s a third axis here, for me, and that’s respectfulness. We wanted our inventions and devices to be grounded in local cultures rather than overwrite them with a purely British notion of steampunk. I wanted to write an anti-colonial adaptation, and part of that was trying not to appropriate or disrespect people’s struggles and history. I did not want to exoticise or stereotype the indigenous steampunks I invented, and so informing the fantasy with historical research was enormously important to me. I tried to think about what kinds of resources are available, what kinds of pressures a culture might be facing, how our fantastical inventions are going to impact the geopolitics of the region and the wider world.”

Jayanth hoped to take full advantage of the opportunities that alternate-reality storytelling presented her as a writer. The fantastical aspects of a story, “enable us to tell the kind of story we wanted to be able to tell, to redress some of the colonialism, sexism and racism of the period. If you’re inventing a world, why not make it more progressive? Why not have women invent half the technologies, and pilot half the airships? Why not shift the balance of power so that Haiti rather than barely postbellum United States is ascendant in the region? Why not have a strong automaton-using Zulu Federation avert the Scramble for Africa? Why not have characters who play with gender and sexuality without fear of reprisal? History is full of women, and people of colour, and queer people, and minorities. That part isn’t fantasy—the fantastical bit in our game is that they’re allowed to have their own stories without being silenced and attacked. That their stories are not told as if they’re exceptional.”

Despite the fact that 80 Days takes place centuries in our past, there are lessons folded into its story that modernity has not yet outgrown. Jayanth hopes her version of the tale reads as a step in the right direction for the source material, which is fundamentally “about two white guys and their incredibly important journey around the world—other cultures, other people, they’re just set dressing for this narrative of white male heroism. You don’t have to work hard to think of ten contemporary Hollywood movies that do the same thing. We tried to challenge that by giving other characters and cultures in our game as much agency as we possibly could—the world of 80 Days turns, but it doesn’t turn around you. Not everyone is there to be a help or a hindrance to your adventure. Other people have their own stories and agendas and revolutions to fight.”