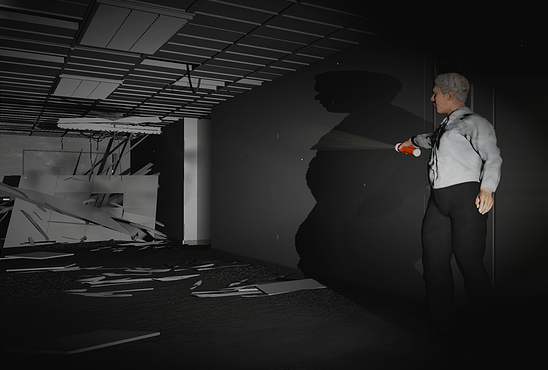 Virtual reality is now A Thing, that weird designation for phenomena that have achieved a certain amount of cultural traction without having a describable appeal. And since VR is A Thing, VR must be used. That is what one does with A Thing.

That is also the best explanation I can come up with for [08:46]. Its developers, a team of French students at Bordeaux’s ENJIM (National School of Videogames and Interactive Media), describe their creation thusly:

A narrative driven experience designed for virtual reality, which makes you embody an office worker in the North Tower of the World Trade Center during the 9/11 events.

Let’s try to be positive here. In their email to Kill Screen announcing the release of [08:46], its creators said they only proceeded with the project “after countless hours of research and an interview with Brian Clark, survivor of the South Tower.” Moreover, the opening minutes of the project are minimally sensationalistic. They follow a couple workers in the North Tower trying to process what happened in the other tower and what it means for them. If nothing else, the team behind [08:46] appears to have made a concerted effort to be sensitive.

But making a concerted effort to be sensitive only counts for so much. (Spoilers follow if you think that an ostensibly realistic narrative about 9/11 can be spoiled.) A sensitive VR narrative about a pair of people who find themselves in their office just before American Airlines flight 11 hits the North Tower is still a VR narrative that places you in the North Tower just before it is struck by a hijacked plane. [08:46] follows its premise through to its logical conclusion, and no amount of sensitivity can really change what that means.

[08:46] is attempting to reckon with power—the power of humanity, the power 9/11’s events still have over us—but it’s really a story about the power of technology. VR is still in its relative infancy. It’s sufficiently glitchy and nausea inducing that we often don’t appreciate just how powerful the effect of total immersion can be. Sooner or later, there will be a VR project that traumatizes its audience more than it conveys any other feeling. Will it have been worth it? [08:46] may or may not be that project, but its existence does nothing to alleviate concerns that such a project is definitely coming.

Will it have been worth it?

What is all of this an attempt to achieve? “We tried to create empathy with the characters,” the team from ENJIM writes. About which, fine, I guess? It’s a good thing [08:46] tries to generate empathy, but was there some shortage of empathy for the victims of 9/11 that really needed to be redressed? If there was, was this really the best way to do it? Empathy in VR can easily become a cheap excuse, a one-size-fits-all justification for any and all artistic decisions. It’s okay; the user is gaining empathy! But faced with the reality of [08:46], that seems hopelessly naïve. The presumption that you can understand a person’s life by occupying their point of view for a couple minutes is just that: a presumption. A better approach to empathy might recognize that some experiences are harrowing precisely because they are unimaginable.

It’s hard to critique 9/11 without coming across as a censorious scold. Any appeal to sensitivity and restraint risks declaring that Ground Zero is both a physical and cultural no-go zone, the kind of place where sanctimony and clichés thrive and experimentation is strictly off-limits. Such an outcome would be a net loss. Artists should address 9/11 and in doing so they should take great (though not stupid) risks. A certain number of ambitious failures are the price one pays for interesting art. Consequently, those failures ought not all be pilloried as malicious desecrations, but instead recognized as the earnest failures that they are. We need more art about 9/11 and especially more great art about 9/11. [08:46] is not loathsome, it just fails to satisfy that demand.