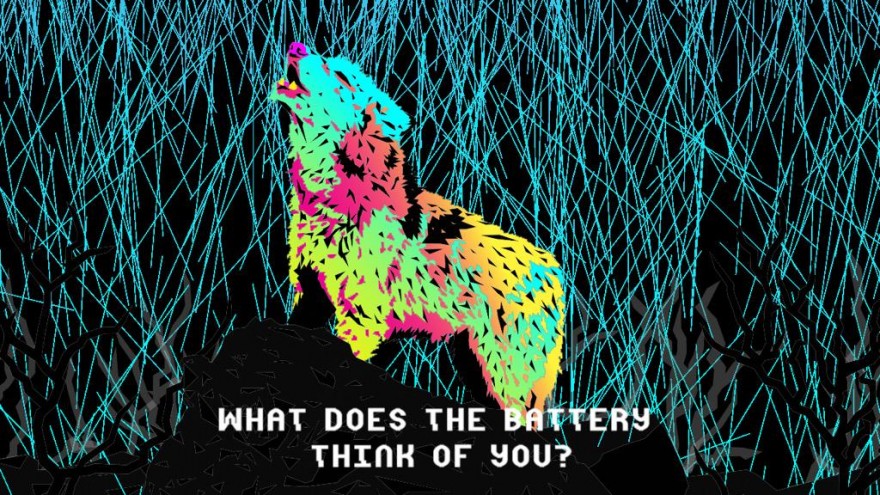 The only way that Samuel Lopez De Victoria can think to describe _Howler_ is in comparison to a Magic 8-Ball. You give it a poke and it’ll tell your fortune.

And so I do. I touch the wolf silhouetted on my iPad. It gives a terrifying screech as a wolf’s wide eyes whip across the screen (a nod to the super moves in Capcom’s older fighting games). There’s a crack of lightning that illuminates a frazzling webbing of digital rain. The wolf then appears, howling into the night sky, standing on a craggy rock with its fur electric and brightly polychromatic. It’s at once mythical and futuristic.

what is true and what isn’t.

“Do not the let the tree touch you,” reads the text. That’s it. This is my fortune. I can keep touching the wolf silhouette for more if I wish. Let’s see. “Don’t fear the gator.” Okay. “Two sweaters said you were manipulative at fighting.” Right. “If you tell, you tell.” Mmhmm.

Is it mysterious? Ridiculous? Insightful? I don’t know. But _Howler_ is certainly open to all of these readings. As with any horoscope it’s there for you to apply to your thoughts and actions as you wish. Should I avoid all the trees I see as I go outside today? If I’m superstitious enough then sure. Who knows what could happen if I don’t?

The story behind how _Howler_ came to be is less baffling. Samuel has discussed with friends over the years ideas of “wisdom” and “truth.” It’s an epistemological discourse that investigated how each friend had arrived at notions of what is true and what isn’t. Typically, it came from a source deemed trustworthy, and these varied between each individual: a book, a video, or a powerful item like a crystal or totem.

“These discussions all felt very valid and things I even believe myself,” Samuel says, “but hearing about so many different interpretations of wisdom I started questioning if there was any real human discernible way to distinguish the silly mumbo jumbo from whole-hearted truth.”

“I see the wolf as this personal mystic being”

Rather than seeking any proper answer to this query, Samuel decided, instead, to experiment with this idea. He wanted to create something that would be both serious and silly. As such, _Howler_ exists to generate wisdom for those who seek it, but also works as a satire of fortune-tellers. “Words in _Howler_ can have meaning or none at all, and I love that,” Samuel says.

It works by generating randomized text from a large number of built-in sets of words. With these words, it then forms statements and questions according to a syntactical pattern—this ensures that each sentence is at least readable. The result is what you see after poking the wolf. “I had fun manually putting the list together as I made up some fake words in the database myself,” Samuel says. “My 10-year-old daughter even gave me some words to be included, though I did exclude her many interpretations of the word ‘butt’ and ‘fart’.”

All that explained, I did have one last question for Samuel: What’s with the wolf? Turns out his last name, Lopez De Victoria, translates to “Wolf of Victoria,” and it has struck a fascination with the creature within in. “I see the wolf as this personal mystic being and I don’t really know why,” he says. “Culturally, wolves always seem to be a symbol of the idea of importance.”

Putting the wolf amid a supernatural storm added to its function as the centerpiece of _Howler_, spurred along by Samuel’s “strange fascination” with thunderstorms and rain patterns. For him, the end result is satisfying both visually and acoustically. That’s a truth he can believe in.

You can download _Howler_ for 99c on itch.io for Windows and Mac. It’s also available for iOS on the App Store. An Android version should also be on its way.