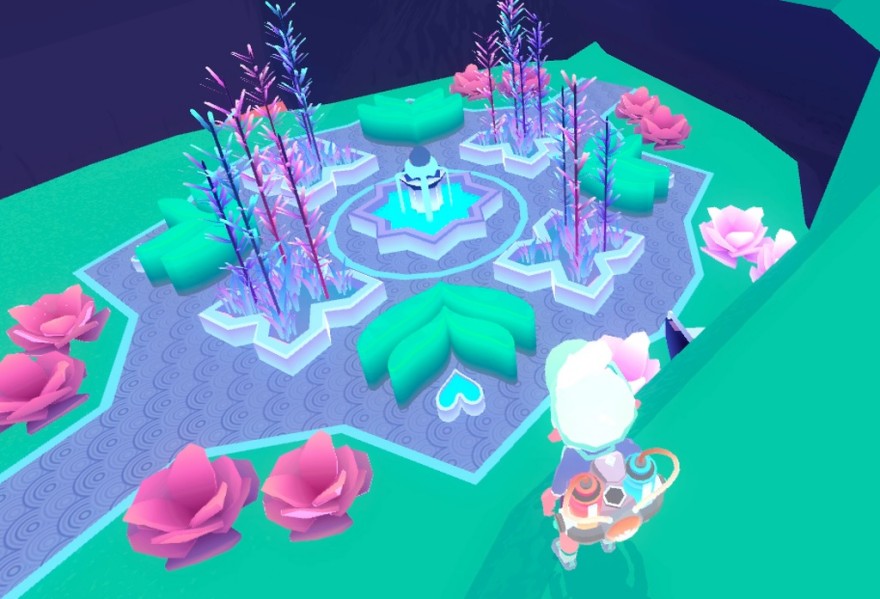 It’s almost surprising that there isn’t a giant Starbucks logo to be found among the pastel-colored environments of Caffeine shown in its first trailer. If it were made back in the ’90s, during the height of the genre it belongs to—the 3D platformer collect-a-thon—it would likely have some form of corporate backing. Like that Zool platformer I played on my DOS computer; the Chupa Chups logo shining like a flowery beacon next to the candy cane meadows and green jello mountains. I was four, maybe five, and highly impressionable. I licked a lot of lollipops that summer.

But Caffeine isn’t from that era. And so it’s a game in worship of coffee for reasons other than paying the bills. You play as Steeper, a barista with a coffee machine for a backpack and an outrageous white curl for a haircut, as he missions to make the best coffee ever. This puts Caffeine more in line with the modern, metropolitan pursuit of locating the best coffee in town. If you go to a city and strike up a conversation about coffee with someone who drinks it, they will probably reel out a range of recommendations, places to avoid, perhaps even getting so specific as to tip you on preferred baristas. You don’t just drink coffee in a city, you enter a culture that thrives on entering every cup consumed on an unwritten league table, everyone an expert reviewer.

In Caffeine, the perfect cup of coffee has been decided, and so the discourse isn’t centered on what or where the best cup of joe is, but how can it be made. The answer directs the journey you’ll make throughout Caffeine, travelling across a sky island to collect the perfect ingredients to throw into Steeper’s backpack, whirring them around, and relishing the hot liquid result. But where Caffeine breaks off from its city-dweller’s fantasy is in abandoning the tall architecture of the metropolis and using Steeper’s quest as a reason to return to nature.

caves made of the purest sugar

As the trailer shows us, Caffeine‘s environments are, for the most part, bucolic. There are gardens where coffee bean plants grow and caves made of the purest sugar. From these you locate the ingredients you are after. But you are also encouraged by the music, which passes over you like waves of electronic water, to take your time, chill out between running errands, and gorge on the rustic vistas pepped up as they are in purple, pink, and green hues.

Even when civilization does sprout like a sharp-cornered weed on this island it is almost as pleasant as when it is absent. The interior design has the indulgence of a 70s luxury pad: hotel lobbies with crystal decorations and gigantic water features, open-plan apartments with luminous flora used as natural lighting next to cream-white furniture. And yes, the populace, too, is fittingly modeled and named after coffee as per Steeper’s example—Pressa and Lady Karmel for starters—almost as if acknowledging the hold coffee has over city folk. And if that doesn’t get the message across then the temples dedicated to the substance certainly should.

You can follow the development of Caffeine on Tumblr.