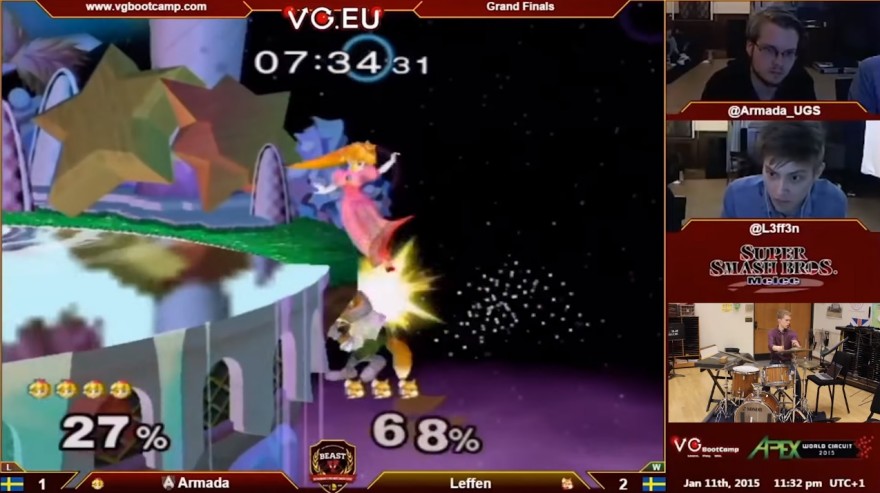 Legend has it that before recording “Maggot Brain,” Funkadelic frontman George Clinton told his guitarist Eddie Hazel to “play like your momma just died.” The resulting track is a 10-minute journey through the cosmos that slowly calcifies into a sad, wonderful kind of musical ego-death. Not only is it one of the finest pieces of musical expression ever recorded—it was all done in a single take.

For Super Smash Bros. Melee (2001) fans, one such moment of sublime perfection happened just last year, at the B.E.A.S.T 5 tournament in Gothenburg, Sweden. It was the grand final, as world-renowned Peach player Adam “Armada” Lindgren faced off against the rising Fox player William “Leffen” Hjelte. In a best-of-five series, Armada was already down 2-1, and his two losses were so convincing that for a minute, it looked like Leffen would emerge from status as a “very good” Melee player to a Melee player who could dominate the game’s uncontested “Five Gods” in a major tournament setting. But in the fourth game, Armada pulled out all the stops: not only did he snag the victory—he didn’t lose a single stock in the process. In Smash, this is a rare feat in top-level play; about the equivalent of pulling off a no-hitter in baseball.

There’s an almost sacred feel to all of these performances

Every performance-based medium has its share of “Maggot Brain” and B.E.A.S.T 5 moments. There’s Kobe Bryant’s 81-point game against the Raptors, Whitney Houston’s earth-shattering rendition of The Star-Spangled Banner at Super Bowl XXV, Daigo Umehara’s legendary victory over Justin Wong at Evo 2004. There’s an almost sacred feel to all of these performances, as if the universe had perfectly aligned to bring us top talent performing at the top level in a peak pressure scenario.

Just as Hazel’s “Maggot Brain” solo would later go on to influence guitar greats like John Frusciante, Carlos Santana, and Dean Ween, Armada’s B.E.A.S.T 5 stunner against Leffen has also inspired a glut of performers who take direct influence. But on top of granting a morale boost to the top-tier Peach players of the world, Armada’s 4-stock victory over Leffen has now inspired a less orthodox tribute in the form of an improvised musical solo.

In a new video called “Musical Melee,” jazz drummer Caleb Goss “covers” the Leffen/Armada matchup with a play-by-play soundtrack that imitates the game’s action in sonic form. When Armada’s Peach gets knocked off the stage, Goss slams the crash cymbal. When Leffen’s Fox fires his signature laser beams for chip damage, Goss taps out a barrage of rim clicks. The combined effect is a wonderful synesthesia that captures greatness across mediums: contrasted with Goss’s constant backbeat, Armada’s every movement transforms into a perfectly assured tightrope act, each hitbox placed just perfectly enough to make contact, every spot dodge an uncanny read of Leffen’s tells.

The funny thing about this tribute is that after tying the series at 2-2 with this flawless performance, Armada actually went on to lose B.E.A.S.T. 5 to Leffen in the very next set. To this day, the tournament is still remembered as Leffen’s breakout victory. But that’s not the point: Kobe’s Lakers didn’t win the championship in the season of his 81-point performance, either. As Goss’s solo illustrates, the most compelling inspiration comes from the latticed inner-workings of the art itself.