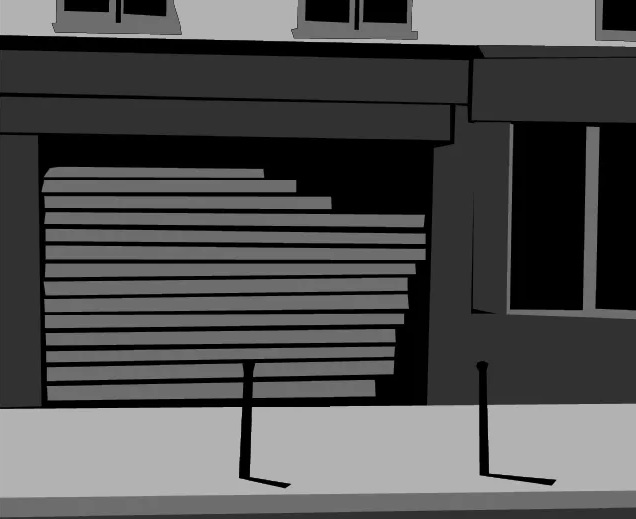 In the narrowest of senses, Pippin Barr’s A Series of Gunshots is a shoot ‘em up. All you do is fire a gun. The game has no other mechanics or activities. It is, however, the farthest thing possible from a traditional shoot ‘em up.

A Series of Gunshots is composed of a series of gunshots. Who’d have thought it? The game consists of a series of black and white scenes. No humans can be seen. Do they even exist in this world? Press a key—any key other than spacebar. A gun goes off. The shot is heard. A window in the distances goes from black to white, illuminated by the small explosion you just unleashed. Faster than you can say “what have I done?” the window goes black again and all you’re left with is the question. The world is as it always was, except you know that isn’t really true.

What have you done?

A Series of Gunshots is interested in that question above all else. The game, Pippin Barr writes, “is entirely focused on the question of gun violence in daily life and most especially its representation (and general glorification or enjoyment) in videogames.” The structure of A Series of Gunshots encourages this sort of reflection; there isn’t really much else to do so you might as well engage in some introspection. In case you’re not feeling reflective, the leisurely black screens between scenes offer sufficient time to catch up.

Whether A Series of Gunshots achieves its goal of being “a game that could make gun violence appear and feel as awful as it is in reality” is up for debate. The game does not glorify the gun even if it is central to its mechanics. (In fact, the gun is never visible.) I do, however, wonder if A Series of Gunshots would really persuade anyone who was on the fence about guns either in videogames or in society as a whole. A Series of Gunshots is a good game because of its subtlety, but the flipside of this is that it is not all that persuasive. What if, say, all the flashes in windows are people warding off attackers? That is not my reading of the game and I can’t say that I find it particularly plausible, but the game doesn’t preclude this reading. A Series of Gunshots is a relatively blank canvas onto which one can project feelings about gun-related incidents. This subtlety is laudable, though it leaves us roughly where we’ve always been: Groups with different feelings about gun violence can find validation by talking among themselves. To be fair, Pippin Barr’s factsheet concedes that the game is unlikely to be a decisive blow in any debate about guns: “It isn’t necessarily clear this game succeeds at it. But it is an attempt, and it is something that needs to be tried again and again.”

A Series of Gunshots is a blank canvas onto which you project feelings about guns.

We do need to try, and we need to try harder. Violence in videogames—and, more specifically, gun violence—does receive a fair amount of attention, but the discourse doesn’t really lead anywhere. This might be Columbine’s legacy: So much effort is expended into (justifiably) proving that videogames don’t turn you into a homicidal maniac, that there is little room left to discuss the softer implications to violent cultural products. Consequently, every study that confirms that the worst sensationalism is indeed overstated get trumpeted ad infinitum. (In this, I, like many of my peers, am complicit.) None of this is really wrong, but it leaves little room for ambient discomfort. It’s hard to say that violence in games, while not a huge threat to society, is culturally corrosive. These thoughts can be reconciled, but they feed off the same finite supply of oxygen.

There are, of course, reasons why guns persist in videogames. Some actions translate better to the medium than others, and shooting is one of those actions. Bullets are also quantifiable, which is helpful insofar as game strategy is largely based on quantifiably scarce resources. Knives, on the other hand, are not suited for a world of ones and zeroes. You can’t neatly count down until a blade dulls. One of the challenges of being uncomfortable with the centrality of the gun in many games is that you aren’t just pushing back against cultural and political ideas; you’re also dealing with these wonkier factors.

The mechanical convenience of the gun does, however, seep into the more narrative realm. In games, as in real life, guns have become associated with agency. The person with the gun gets to decide how the story goes. We learn comparatively little about the lives of others. This distribution of agency, which frequently corresponds with the gap between protagonists and NPCs, gradually inures players to the human costs of their actions. Even though this doesn’t result in videogame players committing mass shootings by the dozen, there’s reason enough to be uncomfortable with cultural products that distribute agency in this manner or encourage the consumer of said products to think about agency along such terms.

For narrative and mechanical reasons, I don’t believe we should do away with guns in videogames. I do, however, wish that a greater effort was made to provide a measure of agency to characters other than the gun-wielding protagonist. First let deaths be meaningful, and then we can work from there. Although A Series of Gunshots is admirable in its intent, all agency still belongs to the shooter. He or she may feel guilt, but those who are shot remain invisible. In that respect, the game almost works more effectively as a piece of media criticism than it does as a corrective. You can feel as guilty as you want in this universe, and sometimes that just isn’t enough.

You can play A Series of Gunshots in your browser.