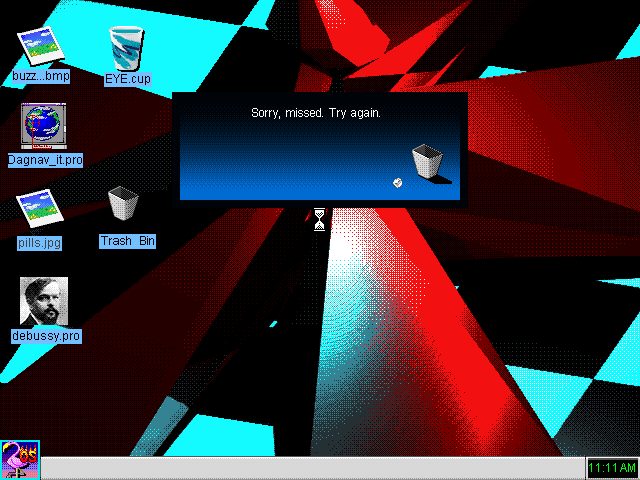 Nostalgia for 1990s graphics and the decade’s range of operating systems is hellfire right now. It’s hot as shit and we can’t get enough it. Hence projects like Windows93 exist. Videogames, too, are increasingly incorporating or fully mimicking the early days of consumer-focused computer technology. Take a look at skeleton flower,  Solitaire.exe, Her Story, and Emily is Away for starters. We’re all growing up while desperately clawing back through the years to get one last sip on that fluorescent pink curly straw and throw gunge at each other. The 1990s it is not, but goddamn if we can’t pretend it is.

Given this recent progression, it seems it was only a matter of time before we ended up with a game like Frog Days being made—it pitched as “an adventure game set in the summer of 1995 in which you use a computer to explore different worlds.” Frog Days sits you down in front of a computer running FlamingOS. It’s a fictional operating system but one that blends all the best bits of Windows 95 and its peers at the time. It has a crude painting program, a chat system, a wallpaper changer, desktop icons rendered with fashionable dithering. You can play around with it all at your own whim. However, the game is structured as if days pass, giving you limited time on the computer with each cycle. It’s also teased by the game’s creator that the story is told within this framework somewhere, perhaps hidden in the computer’s files, or somewhere deeper in.

But FlamingOS, itself, only really serves as a hub for the main pursuit of Frog Days: virtual world exploration. The plan is to have 30 worlds to explore and you’ll do so in the style of 1993 first-person adventure game Myst. That is, clicking somewhere in the environment, and then being warped to that location immediately. There are puzzles to solve in the environments but they are said to be of the simplistic “use X on Y” style. For those not into puzzles, the good news is that they will be optional, so you’ll be able to ignore them totally if that’s your preference.

What will draw your attention instead of the puzzles are the sights. And we’re not talking vast and beautiful vistas here. This is the 1990s and so high-detail landscapes are not an option. Plus, virtuality is highly experimental at this point in time, meaning that something as unremarkable to us now like, say, a 3D rendering of a frog, is state-of-the-art and worthy of its own dedicated program to view it in. This may be why Frog Days does, indeed, seem to have a world with a giant virtual frog in it. The same applies to the world that sees you sloshing around the inside of a hot dog with ketchup and mustard cobras. And why one world is a fish tank, another the petals of a flower, and yet another that makes you insect-size inside a living room where the only light is the nearby television.

What Frog Days captures is that early fascination with the wonders of computer technology back in the 1990s. It was new to a lot of people as PCs suddenly became much more accessible and—with the help of marketing—desirable at that time. As the 1950s saw television ownership rise as something of a status symbol, the 1990s saw the personal computer follow the same path, it becoming a staple of the modern family home. The subsequent increase in amateur computer users meant that, not only were people creating their own gloriously garish computer art, but professionals would commonly create singular showcases of 3D graphics as they not only bewildered the user but showed them what this new box of humming electronics sat in their living room could do.

I remember having a CD that only contained a 3D aquarium that you explored from a static, central view point as rigid-looking fish swam by. I was flabbergasted. A few years later I’d be amazed by a PlayStation tech demo of a Tyrannosaurus Rex running through a voidspace. I didn’t think computer graphics would ever get any better than that at the time. It was unimaginable. Frog Days hearkens to this time period in order take the perceived possibilities of computers back then and run riot with them. It looks wild.

You can keep up with the development of Frog Days on the TIGSource Forums.