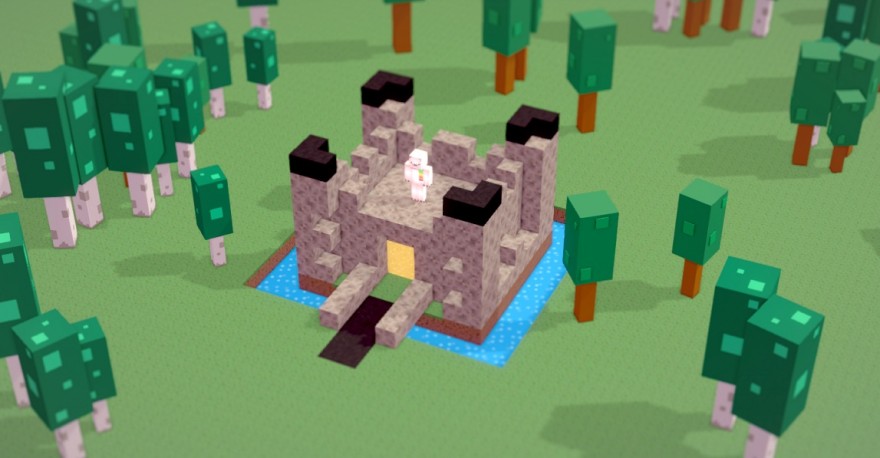 There’s a succinct piece of traditional wisdom in videogame development: start small. It’s common for nearly everyone who wants to make a game to have a great idea for a massively multiplayer online game, but if you’re just getting started, that’s a pretty tough project to get off the ground, to say the least.

At the end of 2014, Aaron John-Baptiste made a game called TMO (Tiny Multiplayer Online) for the weekend-long game jam Ludum Dare. The jam theme was “Entire Game on One Screen” and the tiny MMO-maker plays like a small “clicker game”—you put down Level 1 combat areas until you can afford to build some Level 2 combat areas, and on and on while you keep up with your player base and increase your “Rating” and, consequently, your cashflow. That loop continues as long as you can fit the world on your screen.

demonstrating the underlying structures of MMOs

TMO lets a player see the way quests work in multiplayer online games—talk to an NPC to get a quest, kill 10 monsters, sell loot, talk to another NPC—and in doing so, points out how the system of the “addictive” world you’ve put together mirrors its own systems that keep you playing and expanding your game within a game.

The similarly-named MYMMO grows out of that idea, but, having done away with the single-screen restriction, it already looks much bigger, and it seems the focus has shifted somewhat. It now features chunky Minecraft-inspired voxel graphics (the AI-controlled “players” are already wearing a random assortment of Minecraft skins), and a whole lot more world-building than arranging differently shaped combat areas on a single screen. It looks like the project is moving away from only demonstrating the underlying structures of MMOs and idle-clicking games and towards encouraging players to use its terraforming tools to build worlds that are fun for fake humans to run around in.

Maybe story-telling world simulators like Dwarf Fortress (2006) and the ill-fated Spacebase DF-9 are the new MMOs—appealing but difficult projects for first-time game makers—but since they don’t have to rely on constantly having other people playing, they can find a smaller niche to develop. MYMMO already looks like it’ll be an adorable ant farm. It’s chugging along well with an alpha build planned for later this spring.

You can play TMO here, and follow development on MYMMO here.