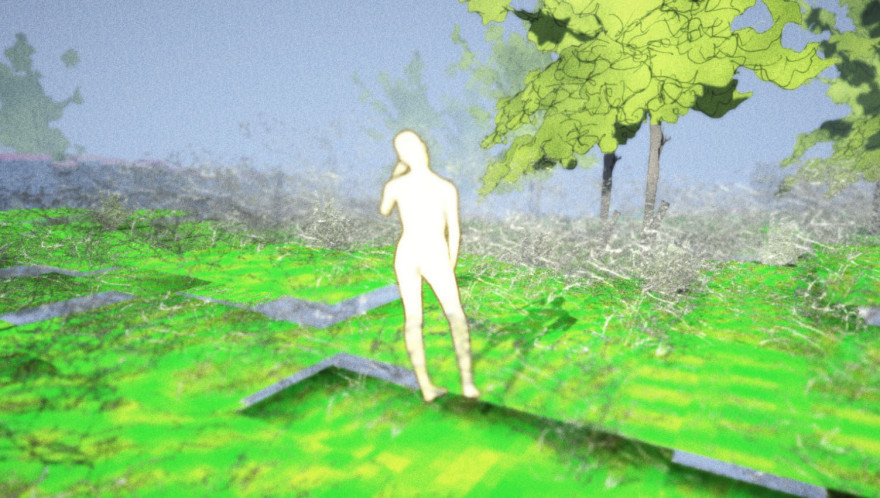 “Much of the experience of the site takes place in one’s head,” says the itch.io page for Cho-am, a new game from Aaron Oldenburg. The site described is the place where Pol Pot—the brutal dictator behind the Cambodian genocide in the late 70s—was cremated. In “real life” Cambodia, this site is near the Thai border, and is host to a small shrine made up of a tin roof over a mound of ash and dirt. Sometimes it is decorated with flowers or incense.

Cho-Am deals with the difficulty of understanding the way others process incomprehensible national trauma. Oldenburg writes of the shrine and the religious respect, “This is a way of dealing with the memory and presence of someone responsible for pain and destruction… outside the realm of forgiveness and punishment.” How do we begin to create sense out of senseless killing on this scale? How do we treat any relevant location or memory?

As the player navigates the space, the game’s camera jumps from place to place depending on the position of the avatar—a naked, cream-colored figure—as though it were helping to give the player a better view, but it doesn’t move to frame the action, it moves erratically and confusingly, jumping from one side of the character to the other, making it hard—maybe impossible—to situate oneself. If you move beyond a certain distance, the camera zooms out and switches to black and white as if to suggest an external observer and highlight the distance of the player from the space.

a lot of fractured pieces to put alongside one another

When it switches back, a black inset appears in the corner—a close-up of the character—and the character performs an action in that halting inhuman way that 3D models sometimes do. The figure vomits, or pounds the ground, or falls over, and shakes itself. The actions themselves are recognizable, familiar, and affecting, but alien in their presentation. We can say “I know what that feels like,” but the skinny person on screen is not acting like I would, moving like I would, processing grief like I would.

Every so often, dream-like images are presented as if in puddles—a bed, a bull, maybe a kidney? They look like they’ve been scanned in from cocktail napkins, which puts them in stark contrast against the jarringly tiled and textured look of the rest of the world. There are occasional plaques, with dedications like “HERE IS THE PLACE WHERE I DISCOVERED THE NUMBERS,” or “THIS IS THE LOCATION WHERE HE CAME AND SAT ON MY BELLY.” These objects—collectable, but inscrutable and directionless—feel scattered, and the world feels at once unfamiliar and repetitive. There are a lot of fractured pieces to put alongside one another and attempt to make sense of, but on the other hand, “much of the experience… takes place in one’s head.”

You can download an early build of Cho-am over on itch.io.