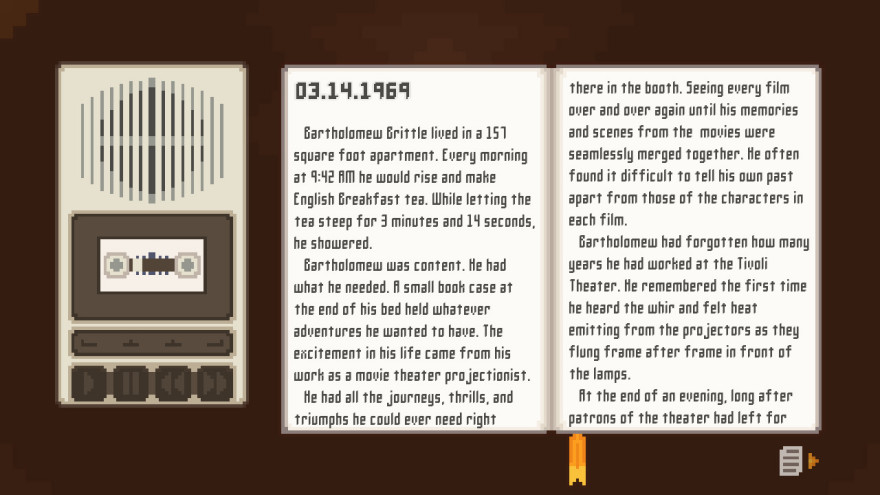 You might head into Dissonance assuming it to have something to say about so-called “ludonarrative dissonance.” Because that’s all people can think about when the word dissonance comes up in the videogame space, apparently. And, actually, upon playing through the first couple of minutes, you might find that suspicion of yours steadily coming true. You’ll be reading along with this virtual novelette and, all of a sudden, a maze game will appear at the end of the first chapter. It’ll seem completely dissociated with what you’ve just read as well as the entire format of reading a book; it’s like it’s been put there just to make Dissonance seem more like a videogame. And so you’ll probably point a finger to the air in this moment and erupt: “A-ha! This game is about ludonarrative dissonance. I’ve sussed it.”

encourages you to think upon the question yourself

You’re wrong. No, Dissonance isn’t about that branch of videogame-specific dissonance. It’s about the meaning of life. The title is referring to the musical notion. The two don’t have anything to do with each other on first thought but by the time you’ve finished Dissonance you might have changed your mind. I’ll explain: Dissonance follows a movie theater projectionist called Bartholomew Brittle as his simple and orderly daily routine is interrupted by the young Clementine Cleu. She appears standing outside Brittle’s workplace one day, follows him in, and then sits down with an audio recorder and asks him “What is the meaning of life?” Dissatisfied by his answer, Cleu vows to return everyday until she gets an answer that she can’t immediately poke a million holes into. This leads Brittle deep inside himself where he hopes to extract an answer.

OK, that didn’t explain what musical dissonance has to do with the meaning of life, but divulging that would be to spoil the story. In any case, what’s more important to Dissonance‘s themes is understanding that there probably isn’t a ubiquitous meaning to life. The narrative framing of the story means that its writer, Phillip Royer, is able to explore a different proposed answer to the central question each day that Cleu returns. The games that appear at the end of each chapter succinctly translate the thinking of each answer into an interactive model. When Brittle concludes that the meaning of life is to fight against the odds then you get to play a boxing match against a computer opponent. It makes sense. (Still, the games can’t be that important if they’ve been removed and the remaining package sold as an e-book.)

Dissonance is a micro-exploration of some of the many different approaches people have taken towards finding an answer to “What is the meaning of life?”, then. As such, it touches upon ideas such as free will versus fate, existential dilemma, and even entertains the humanist revision of the question: “What is the meaning of MY life?” While it’s doing this, it encourages you to think upon the question yourself while reading. Next to the book is a tape player that you can pause, play, fast-forward, and rewind. If you press ‘Play’ then a voice will read the story out to you, and if you hit ‘Pause’ then the voice stops and a gentle soundtrack gives you a chance to reflect, its drawn-out notes breeding thought. It’s made to give you the time to flick forward and back through the pages, to revisit and reconsider thoughts, to create new ones while your mind drifts out on some ethereal note.

All this considered, it might seem counter-intuitive for Dissonance to suggest that there is a single meaning to life. And it does. Brittle eventually lands on an answer to the question that he sticks to but he doesn’t give Cleu a chance to shoot down. Instead, both characters go about their separate lives, never seeing each other again. Despite this, the final answer isn’t wholly satisfying (what did you expect?), and I think that’s the point. The obvious reading is that Dissonance settles on a meaning to life but what I saw is a narrative that is, in fact, against the whole pursuit. We see Brittle physically and mentally torture himself over this question and only finds happiness when ignoring it and getting on with his life. And that seems to be the point of Dissonance; to conclude that getting closer to the meaning of life involves doing rather than thinking. Yet it’s a game that encourages thinking rather than providing lots of things to do. Is that dissonant enough for you?

You can purchase Dissonance on Steam and over on itch.io. The e-book edition is available on Amazon.