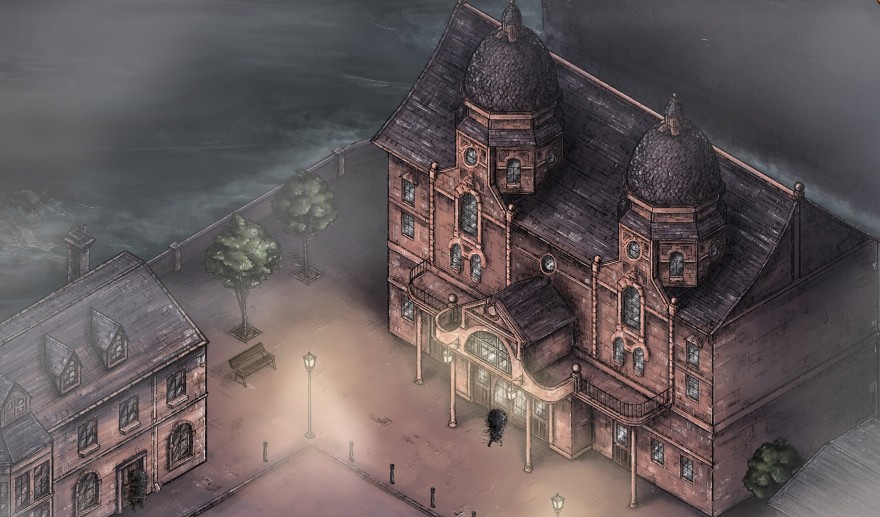 The city in A Place for the Unwilling is alive. It may even be possible for it to die. The streets and buildings make up its physical form as bones and muscles and arteries do ours. The population is its life force; rushing like a bloodstream through the alleys and avenues, occasionally stopping for conversation next to a monument or under a streetlamp. The city hears them whispering each other’s names, it feels them moving around inside of it, and more recently it has felt something darker and twisted lurking within it.

The idea in this upcoming narrative adventure is to explore this city, to discover its dozens of stories, and to play a part in the events that will shape its future. It’s a concept not so dissimilar to the many RPGs that promise you a crucial role in deciding a world’s fate. But where A Place for the Unwilling finds promise of its own is in shrinking that scope down to a single city. It’s intended as a rich, singular architectural essay in the same way that Fritz Lang’s Metropolis might be. This focus emerged naturally from the curiosity of the game’s three creators at AlPixel Games. “London, Madrid, and Paris are all different, but not only because of their monuments or shops; we could say each of them has a ‘soul’ which makes them unique,” Luiz Díaz, the game’s designer says.

turns the urban landscape into a kind of biological creature

AlPixel Games wants to delve deeper into this line of thinking; a city having a life of its own. Not only conceptually but actually. If you head into the poorest neighborhoods in A Place for the Unwilling‘s city you’ll see cheap houses “growing” on their own accord, without any of the urban planning it usually takes. Observing architectural quirks such as this is how you’ll gradually come to understand the city. There will be no mini-maps or destination markers to guide your way. Nor will there be anything gratuitous to distract from your aimless wandering such as puzzles to solve. And so, as the game turns the urban landscape into a kind of biological creature, its narrative is similarly organic as you find your way.

Through exploration alone, you should be able to figure out that there’s a tension between the city’s different areas, a divide between its residents. Using Victorian cities as a model when designing this virtual one has meant that squalor and plague infests some of its sections, while the richer areas are cleaner and is home to those who know only luxury. This inequality will perhaps be the most visually and thematically obvious characteristic of the game’s city but there will be much more to find. “The smallest details are one of our main focus, we want you to see the silhouettes on the windows and even be able to buy a newspaper and read about what happened the day before or what might happen that day,” Díaz says.

A city wouldn’t be much without its populace, of course, and A Place for the Unwilling does represent them, albeit in an unsettling form. The presence of strangers is visualized as shadowy figures that you can talk to but only to ask for directions. Until, that is, an important event happens and you hear their name, causing the shadow to fade and reveal the person below. Only then can you discover more about these previously faceless forms.

It’s implied in the game’s description that revealing people and experiencing events is how you’ll steadily move this city towards its conclusion. Although it seems that will happen anyway with or without your input. Díaz and team reference Pathologic and The Legend of Zelda: Majora’s Mask, both of which have in common a time-based structure, giving players only a number of in-game days to prevent a disaster. It seems that A Place for the Unwilling will enforce similar restraints when asking you to explore its city and affect what ultimately happens to it.

You can follow the development of A Place for the Unwilling on the TIGSource forums.