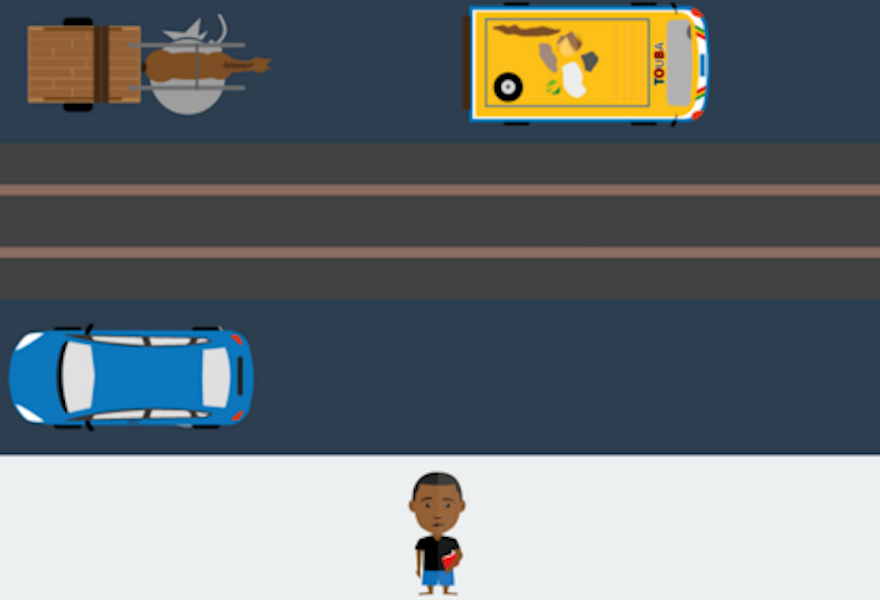 If ever a title exemplified the ability games have to comment on important issues, it’s Senegal’s Cross Dakar City. Essentially an updated version of Frogger in the vein of Crossy Road, its goal is simple: you are a young boy named Mamadou trying to cross the various streets, railroads, and rivers of Senegal’s capital city, Dakar, without running into any obstacles along the way. Unfortunately, traffic is indifferent to you, and you’ll have to dodge any number of vehicles, trains, and even bombs just to get home. This is because, as Mamadou, you are a talibé, or child beggar, and something as simple as pedestrian right-of-way is out of reach for you.

In Senegal, enfants talibés—talibés for short—are students at daaras, or Quranic schools. Because many families aren’t able to pay the costs associated with sending their children to regular local schools, they instead enroll them in these daaras in hopes of securing them a better future. However, the religious leaders (called marabouts) who run these schools sometimes exploit their students, sending them out into hectic and dangerous streets to beg for cash.

“People are not doing anything to help them,” Cross Dakar City’s developer, Ousseynou Khadim Bèye, told Okayafrica. “For most Senegalese, they are part of the decor.”

So Bèye took action, hoping to humanize Senegal’s oft-forgotten 15,000 child beggars through the use of play. A native game developer who studied at the city’s Ecole Supérieure Polytechnique Dakar before moving to France to intern with Ubisoft, Bèye developed Cross Dakar City to help bring attention to the problems faced by talibés as well as educate talibés themselves about traffic safety.

“Many child beggars, who are as young as seven, become accident victims,” he told VICE’s Motherboard. “They are also subject to kidnappings and sexual abuse.”

the response to Cross Dakar City has been overwhelmingly enthusiastic

So far, the response to Cross Dakar City has been overwhelmingly enthusiastic. As of now, the game has been downloaded close to 36,300 times, becoming a major hit in Senegal while also enjoying some success in France and the US. It’s a heartwarming outcome for Bèye, who was worried that he might be told not to focus on videogames while his home has basic needs still unmet.

For Bèye, however, addressing these needs isn’t at odds with making games, but rather an integral part of it. As he told Okayafrica, “People should be more oriented to resolving solutions than just learning programming languages…learning languages without applying them is not useful.” As such, he’s already partnered with a local organization that tries to place talibés in regular schools, and he one day hopes to make games alongside major human rights groups like UNICEF or the Human Rights Watch. Eventually, he’d like to set up his own independent game studio in Dakar with a focus on making games with African themes and messages.

You can download Cross Dakar City for free over Google Play and the App Store.