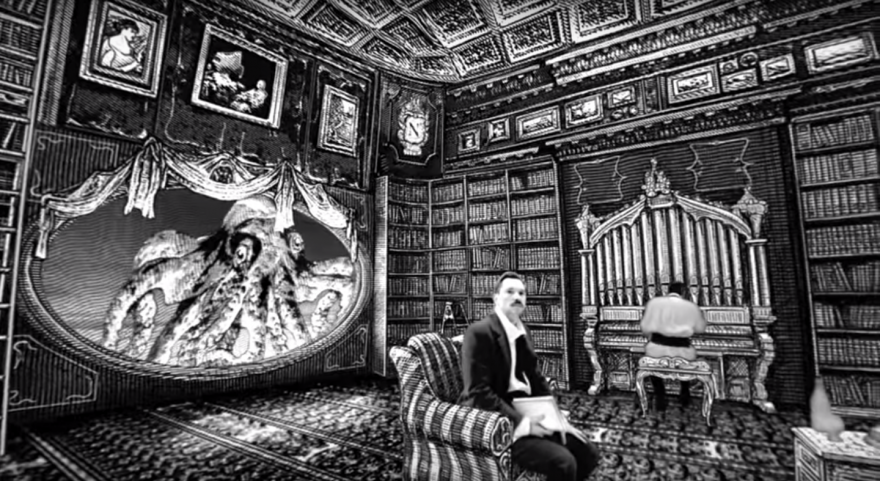 Libraries, huh, yeah. What are they good for? With apologies to Edwin Starr and Betteridge’s Law, the answer to that question is probably not “absolutely nothing, uh-huh uh-huh.” That’s a start, but it still leaves the not insignificant question of what, exactly, a library is good for in this day and age?


As I waited in the bowels of the Grande Bibliothèque in Montreal for a showing of The Library at Night in mid-December, I found myself thinking of this question. The show, which is a collaboration between writer Alberto Manguel and artist Robert Lepage’s production company, Ex Machina, centres on 10 three-minute virtual reality films about famous libraries, from Alexandria, Egypt, to Mexico City, by way of the vessel in Jules Vernes’ Twenty Thousand Leagues Under the Sea. As with Manguel’s book of the same title, the exhibit suggests that libraries only reveal their true selves outside of peak hours. To that end, its constituent films do not function as user guides. Rather, they each place the viewer in the center of a library and invite her to look around as Manguel narrates the scene.

The Library at Night is not, however, solely composed of VR films. The experience begins in an anteroom, modeled after Manguel’s barn. The space first appears to be a museum exhibit, but it comes to life as the author’s pre-recorded voiceover explains the room’s collection and importance. As Manguel speaks, books, portraits, and windows light up to emphasize his points. The audience mills about the anteroom, experiencing subtly different versions of the same environment even before they have donned their VR headsets.

That happens in a second room. With double-height ceilings, it accommodates artificial trees whose trunks turn to sheaves of paper as they intersect with the floor. Those papers later rustle underfoot as audience members spin around in their wooden chairs. In the final moments before donning headgear, one notices that the chairs are positioned in front of library tables that are topped by green banker’s lamps. This, too, is an alternate reality library, albeit one with a physical presence. The Library at Night takes an expansive view of immersion, suggesting that VR alone cannot produce such engrossing results.

Once one accepts that the experience of a VR film is not wholly contained within the headset, it becomes hard to know where that experience actually begins. The Library at Night encourages a form of criticism more associated with architecture than film, the promenade architecturale. At the very minimum, The Library at Night really begins in the Grande Bibliothèque’s lobby, where the library and archive’s regular patrons come and go, and newly-returned books are shuttled away on conveyor belts. The experience continues past the café where students are studying and down the steps to the basement. There, a sign about the health risks of VR—“Wearing the Gear VR headset may have harmful effects on pregnant women and people with a known medical condition (visual or neuropsychological disorders, cardiovascular disease, etc.)”­­—greets potential audience members. This is not an introduction to VR for tech geeks and insiders; it is the sort of cautious greeting offered by an institution that once introduced much of the population to personal computing and the Internet. Thus, to the extent that The Library at Night is about libraries in general, it is also specifically about the library in which it is on display.

But what of the actual films?

Fine. They’re fine. Ex Machina’s approach to VR is accessible but fundamentally uninspiring. Their films avoid VR sickness by employing a still camera that floats in the centre of each library. You can look around as little or as much as you wish. Look down and you’ll see the floor. No feet are visible. You are just a data point floating in space. This approach to filmmaking is weightless. It is also largely opinionless. One of the central challenges of VR filmmaking is that the audience’s ability to look around curtails the director’s ability to frame a shot. This problem has yet to be solved—and may not be entirely solvable—but works like The Archer suggest that visual ingenuity can be a means to this end. The Library at Night, however, resorts to audio cues. Some of these cues, like the sound of birds chirping, are subtle and effective. Others, like the narrated command to turn around and look at a mural, are clumsy and nonsensical. What if you’re already looking in that direction, as I happened to be? Tough luck. The Library at Night can be visually inventive and its narration, when not compensating for the medium’s limitations, is engaging, but Ex Machina’s use of VR just isn’t up to the task.

Lepage and Manguel’s show can be understood as a companion piece to 2014’s Cathedrals of Culture. Spearheaded by Wim Wenders, the collection of six half-hour documentaries uses aggressive stereoscopy and narrations delivered as if walls could speak in an attempt to understand the innermost feelings of famous buildings. This approach to 3D filmmaking distorts the relationship between foreground and background, emphasizing details at the expense of context. Cathedrals of Culture, for all of its failings, succeeds in transmitting a clear visual idea of what should be held dear in each of its six buildings. (The remarkably asinine narration offers little competition in this regard.) The Library at Night is also interested in the soul of buildings and also uses a combination of technological advances and narration to get its points across, but does so to completely opposite effect. Whereas Cathedrals of Culture offers no shortage of opinionated visuals and little else, The Library at Night leaves you wishing that Manguel’s words and Lepage’s visual wit could be complimented by Wender’s aggressive framing. Both works are inventive disappointments that suggest that their central concepts, once fully realized, will make for a good film. That film does not yet exist.

One exits The Library at Night much as one came in: past the library tables and artificial trees, past the warning sign, up the stairs, past the café where students are still studying, through the atrium, and past the book return machine. It’s one last library tour after the ten or eleven in the exhibition space. Of all the tours The Library at Night orchestrates, this one is the most compelling. It is a reminder that the library has historically served to diffuse cultural and technological innovations, from books to personal computers to virtual reality. Ex Machina’s approach to VR is too mild to be memorable, but it is a safe introduction to the medium. You can go to The Library at Night with your parents and not worry too much about the possibility of their throwing up. That’s what I did, and no nausea ensued. (I have also been asked to point out that my parents purchased the tickets and brought me along.)

Compared to specialist meetups, The Library at Night takes a democratic approach to promoting the medium of virtual reality. In this case, the underutilization of VR’s capabilities is the cost of accessibility. For now, that may well be an acceptable trade-off. It is not obvious that the more in-your-face approach employed by VR filmmakers is always preferable. Aggressively experimental works have an important role in advancing the medium, but they may not be the best way to spread it. The New York Times’ VR app, for instance, offers a more plausible route to widespread adoption, and The Library at Night is more closely aligned with NYT VR’s vision. Embedded in the experience of attending The Library at Night, then, is the sort of political and cultural calculus one can expect from a library.

Therein lies the beauty of the procession out of The Library at Night. VR to a café-cum-study space to books: It’s the modern library encapsulated in one short sequence and the sort of clear framing that is otherwise lacking from the whole affair. The Library at Night, by dint of its existence makes a good case for what a library can offer as a civic institution in 2016, it just doesn’t do it through its filmmaking.