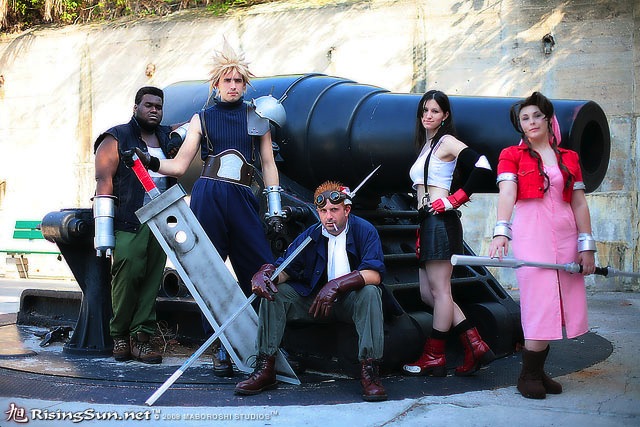 Above: These villains have been ruining childhoods since 2005

Look, I’m human: I loved Final Fantasy Seven. It’s affecting, funny, sad, well-told, unexpected, ambitious, fun, and weird. There was a speaking tiger and a jive-talkin’ black dude with a robot arm that gruffly charmed his way out of stereotype and into legend. The game just plain ruled. Somewhere in the dankest recess of my childhood bedroom is a Cloud Strife wall scroll.

Like the best entertainments, and like no Final Fantasy since, Seven (and I think we must no longer stoop to use Square’s nomenclature) yielded an extra energy, an atmosphere that was totally captivating and that is difficult to describe because it was not directly tied to any one component of the experience. Call it 21 grams of gaming soul, magic, whatever. If you played it, you get it.

I totally understand the impulse to write and talk about that feeling. Goodness knows I wouldn’t shut up about it in seventh grade carpool, to the boundless dismay of the parent drivers.

I’m going to make an extended analogy to sex now, and I’d like you to bear with me, even though we both know it is a fraught and ridiculous analogy. Sex is another thing that is magical and just absolutely suffers from being written about. Have you ever read a good sex scene in a novel? Me neither. In no way does writing about sex even approach what the ineffable human experience of doin’ it is like. Yet we can all walk around the world, silently contented with knowing that sex is great. We don’t need fan fiction, or a soundtrack, and we definitely don’t need a remake of sex. It’s good and available in a lot of ways, like Final Fantasy Seven.

From now on, can we maybe agree to all walk around with a smile on our face, knowing just how good Final Fantasy Seven was? That whenever we’re getting a hankerin’ for a few fifty hours with Tifa and Rude and Heidegger we can just play the original, knowing that it rules? There are like two or three tiny nooks of this game that have not yet been the subject of a 5,000-word think piece, and they are mine and I want to keep them. Nothing kills the mood like talking about it.

Here’s what we should be talking about instead: over the past ten years, with a few obvious exceptions, Square has made a series of increasingly terrible role-playing games. Our nostalgia for Final Fantasy Seven compels our (my) wallets to reward these turkeys and it prevents the series from evolving into something fresh and weird and fun again. There won’t be another Final Fantasy Seven, but there might be a first Final Fantasy Fifteen and the only way for it to have a chance is to shut up and make Square think we don’t care anymore.