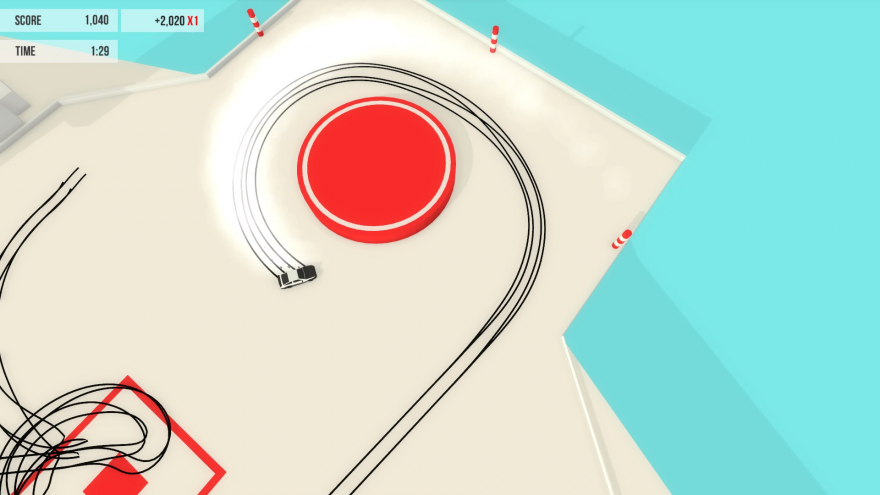 Around the early-aughts, “drifting” swerved from being stage-one of spiralling out of control into a highway tragedy into this bitchin’ rad technique that showed how much of a skilled racer you were. Who did it? Initial D? Double Dash? Tokyo Drift? It was probably largely Tokyo Drift. “Drift” is right there in the title. But drifting, something rarely used in actual racing, has since become a staple to stunt sequences and fate-tempting suburban kids. In Absolute Drift, a game which re-shapes the racing game to meet this specific stunt, it is drifting absolutely.

It begins with a confrontation with an unspecified Shinto deity. You, a Micro Machines-sized car, have found yourself in what I believe is a drifting heaven. Slippery waxy floors that make you navigate the road like a pool ball. Large expanses broken up only by pure-coloured containment facilities. A bulk-order of figure-eight turns. Ramps. A pillowy white world where trance music plays ad nauseam, an echoing sample from a Tegan and Sara single like relatives calling to you from the living world. It is like an idiot club for cars, a Valhalla for those automobiles who died trying to see if they can do it like the stunt actors in Hollywood, forever fated to drift unharmed in the afterlife.

Absolute Drift takes the top-down racer and recreates it to its needs. Racetracks have laps, but no competitors or time limit, the goal is to do as many drifts and swerves and donuts before you cross the finish line, and the only caveat is that you cannot move backwards. In more free-form obstacle courses, it changes its form to something more Tony Hawk-ish. Obstacles asking to be made into point grabs, not rails to grind but boxes to smash, buildings to drift in between and rounded objects to circle like a drunk vulture.

Everything is handed to you

Like how I imagine heaven to be, this can get pretty boring. Everything is handed to you. If there is a ramp, please launch yourself over whatever it’s next to. Overhanging objects mean it’s time to drift under them. X marks the spot you’re supposed to do crunch the handbrake and twirl over. It gives you it all—some objectives feel a little too generous in accepting a “nearby” drift that looks like it’s ten yards away. The only times I was challenged were when I completely misinterpreted instructions and hopelessly drifted by the wrong objects, or when I’m just trying to realign myself but am victim to the frictionless road. Why am I drifting again? What corners am I trying to dramatically cut?

Drifting is not an absolute; it is a means to an end. Even No Brakes Valet wanted you to park. It all makes sense now: it took drifting in isolation to clarify. It’s become a fixture in racing action potpourri because it is a very dangerous and exhilarating way to turn left or right. But there’s no danger in Absolute Drift, just repetition. Every point is a slam dunk. Every swing a hole-in-one. Every meal is dessert, and I’m starting to miss broccoli. Would you rather drift in heaven or race in hell? When the chubby demon servant stuffed Homer Simpson full of bottomless donuts, it was supposed to be a punishment. James Coburn went mad in 15 minutes.