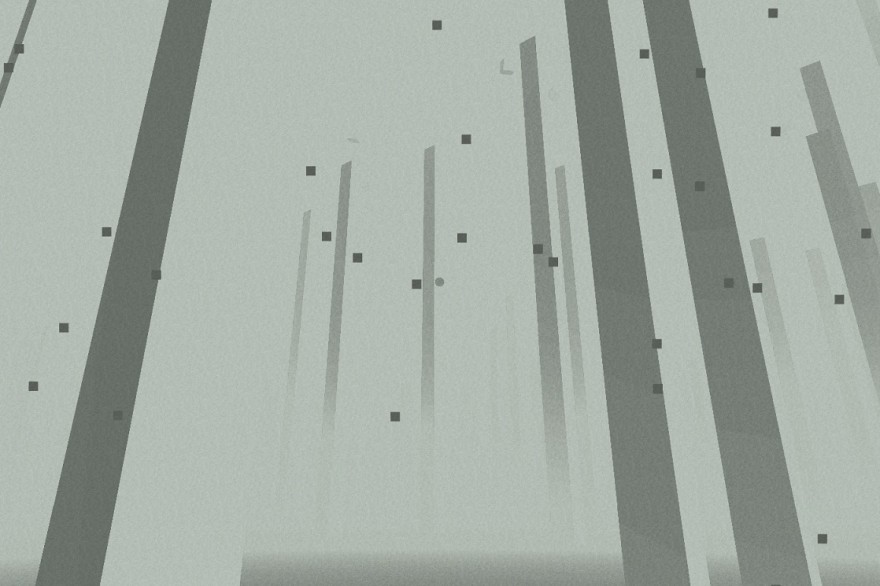 The concept of a “game album” is hardly new but Davide A. Fiandra’s effort has a more specific goal: to capture good “record flow.” Titled Absolute Silence, Fiandre’s game album is a series of lo-fi and abstract experiences. Many of them do have a musical component but it’s supposed to be the mechanics rather than any audio that creates the flow. With that being the case, the album could be said to be a dreamy, contemplative series of stops and starts—sometimes exhausting, other times frenetic with energy before tapering off.

The album begins with “PLAYING PEGGLE AT 3 A.M,” which establishes the drowsy tone that will carry through the rest of the album. You fire balls into a pachinko machine while trying to regularly stick to a rhythm dictated by shrinking circles. There’s no score here and no way to win. The only end comes in the form of an eye-shaped aperture that slowly closes over the screen the longer you play. The notion, then, is that the rest of the album is a late night crawl through ennui and, indeed, Fiandre confirms that he worked on each of these games “in a non-awesome period of [his] life.” This might explain the dull grey color that dominates the album from start to finish—there’s a sense of lingering depression.

The following two games, “CREATION IS A HOPELESS QUEST FOR ABSOLUTE SILENCE” and “THE CUBES ARE STUCK” further feed into this tediousness. The first of these has you play a variation of Tetris (1984) with only rectangular blocks. You must maneuver each of them as they fall to fill the entire screen as if creating a wall. Each block adds more noise to the growing cacophony of musical sounds. And as the stack of blocks gets towards the top of the screen the pressure rapidly increases along with the volume. Given the title of this game—”CREATION IS A HOPELESS QUEST FOR ABSOLUTE SILENCE”—it’s plausible that Fiandre’s idea here is that each block represents a project, one that its maker hopes will satisfy their creative needs, working towards a satisfying silence. Yet each project (i.e. block) only multiplies noise and the effort soon tumbles out of control.

they recall the delight of creating music with digital tools

“THE CUBES ARE STUCK” is similar in that it gives you a maze to navigate that soon becomes exhausting. To succeed in this maze you have to solve block-pushing puzzles and also dodge deadly particles, sometimes separately, sometimes simultaneously. It’s tough going. And your will to continue is easily broken down by the constant reminder of an inventory box at the bottom of the screen that shows you how many items you still have to collect. You also need to figure out how and when to combine these items into new blocks. The garish art—mud-brown blocks and blurry red bullets—only encourage you to give up. Luckily, you can if you wish by skipping to the next game.

It is after these three initial games and the interlude that Absolute Silence begins to pick up some pace. Having demotivated you, the next three games in a row are shorter, more immediate, and absolutely musical. In fact, being so abstract, they recall the delight of creating music with digital tools. “MINUS ONE” has you shooting geometry with violent, glitch-like results. “NO INSIDE NO OUT” is a gentle, first-person wander through a two-tone forest of sharp pillars. “BETWEEN BEING” demands that you collect circles and click squares as they appear, with each of them lending a different sound to the mix, but also steadily shrinking the circle you control until it disappears. This last one is like a gradual fade out from this hat trick of more delightful games; from energy back to lethargy.

And so comes a return to the wearisome palette of “THE CUBES ARE STUCK” in its “REPRISE.” It returns as if a drought in creativity, the comeback of depression; like an artist losing their inspiration and leaning back into old habits. This reprise is easier going than the original game due to a single mechanic: invincibility. You push blocks onto lighted floor panels and your white circle turns green. With that, you can walk through the lasers and bullets that frustrated you earlier in the album. The implication is perhaps that the artist has found a way to cope with the obstacles in their life.

This idea is further cemented by the album’s “OUTRO.” You catch shapes as they fall, each success puncturing the black with a small circle that steadily grows. These circles add a lighter tone and music to the animated canvas. However, you can only move around in the black parts of the screen, so your maneuvering space shrinks. Eventually, you have no choice but to succumb to the noise as you get stuck between the circles; forget the pursuit of silence. This surrender seems comfortable, relaxing, perhaps even liberating. And so what Fiandre’s game album seems to connote is a journey through depression and tedium that ends with a way of coping with it. It doesn’t feel like victory, as overcoming depression never does, but there’s a sense that the artist has figured out how to live with it. Perhaps they’ll be able to create once again.

You can purchase Absolute Silence over on itch.io.