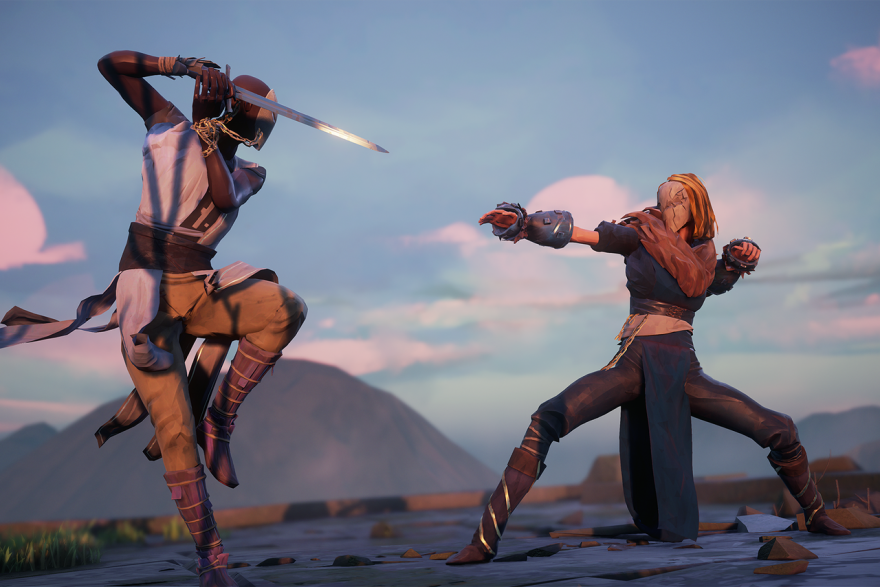 It’s tempting to describe Absolver with an endless stream of references to other games—big ones, the type for which you see cardboard cutouts at GameStop. It’s an online multiplayer game riffing on the model of Destiny (2014) or Dark Souls (2011)—not, they clarify, an MMO—with players both friendly and unfriendly roaming a semi-open world. The elegantly low-poly world has the feel of a somber The Witness, and its tight, frame-specific combat recalls the brawlers of Platinum Games.

But that laundry list sells it short. Tucked back in an Airstream trailer, far enough from the Los Angeles Convention Center to allow me to breathe easy, Absolver was easily the most interesting game I saw at E3: vividly art directed, mechanically robust, and thrillingly unformed. Its world was designed in broken, arcing pathways, the natural world crawling out of the ruins and blending into the greater landscape. Its interactions play like a more ambiguous Journey (2012). You might kick down a door into dappled sunlight, look out across a veranda, and see a few other masked warriors engaging in balletic combat. They could be friends or enemies, possible teachers or unremarkable passersby—there are no cues aside from the nature in which they approach you.

Its combat starts simple—two buttons, plus dodging. But even in the short demo I played, it scaled up into a dizzying complexity, employing skillful misdirection, weapons, and a byzantine, interlocking set of stances and attributes with which players develop a bespoke fighting style. It’s notably slow, “giving you time to see what’s happening and to react,” according to programmer Olivier Gaertner. That generous reaction time did not stop Gaertner from kicking the shit out of me, such that he eventually just put the controller down so I could get some hits in, but the nature of the combat was still shockingly intimate, full of feints and volleys, more like a drag-out argument between friends than the endless power-fantasy and cuckoldry of other competitive games.

Absolver’s designer, Jordan Layani, cited as inspiration 2006’s God Hand—a wildly misunderstood brawler developed in the golden years of the PlayStation 2. “Some reviewers seemed to like it, others said, ‘What is this shit?’” he laughed. Absolver looks to make that game’s core mechanical conceit relevant through polish and sheer post-apocalyptic sheen.


Beyond those two elements, though, all is in flux. Gaertner and Layani were refreshingly candid about this. The two met at Ubisoft, before leaving to form Sloclap along with two other coworkers. (The team now numbers 20 people.) It’s perhaps this big-studio background that lends the game its incredible refinement. This was no passion project: the four designers initially went out looking for a solid mechanical experience, and when they found it—the one-on-one fisticuffs, which scaled easily into double-digit brawls—they built all of the game’s systems on top of it.

They could chart a story outline for me and some rough plans for the modes they intended to implement, including procedurally generated labyrinths and other back-of-the-box bulletpoints, but what they were there to show was a form of interaction and a lovely, ruined world in which to do it. It’s enough. The little bit they have glitters with possibility, at once more stolidly old-school and daringly unconventional than any of the brighter names just a few blocks away.

You can find out more about Absolver over on its website. It’s coming to PC and consoles in 2017.