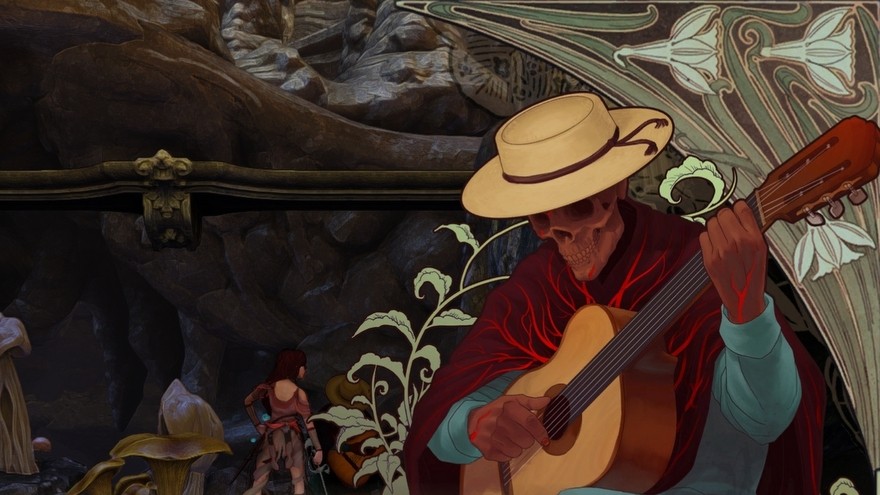 I am struggling from withdrawal. From the Game Boy Advance to the Nintendo DS, Konami was spoiling us—me—with a really steady stream of good-to-great 2D Castlevania titles. Full of monsters, myths, mayhem, mammoths and summons. Dungeon crawling, tower scaling. Then a very sudden stop. In pursuit of a more blockbuster, God of War affair for the franchise, 2D Castlevanias went silent.

Abyss Odyssey steps into that vacuum. A Mucha-inspired ghoul assault with that pleasing blend of RPG weaponry and action weapon-play, the game presents itself as a salve. Of course, Abyss Odyssey isn’t Castlevania. At first it was easy to let the differences drag me down, but ultimately it was in these differences—the places the Belmonts hadn’t explored yet—that there was beauty. Something else I realized is that I probably take this matter way too seriously.

It was in the places the Belmonts hadn’t explored yet that there was beauty.

That title—Abyss Odyssey—sounds generic, but in a world of vague hyperbolic titles ACE Team, famed for Zeno Clash and Rock of Ages, scores points for being accurate. Abyss Odyssey is, in fact, about downward questing into an abyss, a pit underneath a moonlit warm-breezed metropolis. Straight down. A plummet to the bottom where a warlock sleeps and his dreams have become the demons you go at.

Soldiers of this lavish nation are pouring into the hole to fight back, but it’s up to you, hero (or your friend, the hero’s bud) to make the sorcerer’s snooze a little more permanent. You can choose between a monk with a broadsword and no body under his cloak, Pincoya, a mythical water spirit with a huge spear, and a medium-balanced avenger with a proportionately-sized blade. All of ACE Team’s games are lavishly drawn—sort of despairing, oblique, surrealist spaces—and this is no exception. The portraits of characters are warm, art noveau works. Ornate patterns and arbour seem entwined with copper. The armies of menaces are equally varied: formless spectres, jesters, fawn-minotaurs, elemental bulls, a fiddling devil and a bunch of towering oddities with a bird thing going on.

The roguelike has become a common muse for game designers of late, and this one, clearly, is ACE’s take. A little like Spelunky, each adventure burrows through a rough set of different themed areas: jungle, cave, icy.  Each chamber is randomized with traps, secrets, arenas, plots for experimentation and a few bosses. A little like Castlevania, each session is also outfitted with a world-map; the only promised constant of each chamber is its difficulty. It’s kind of like a Dungeons and Dragons Plinko: you can try to drop yourself with the proper trajectory, and if it works out well you pat yourself on the back, but most of the time you have to accept that the disc has a mind of its own.

So why isn’t Abyss Odyssey the whole package? Why isn’t this a substitute for the games we’re really hoping to play? It comes down to what we’re actually doing once we’re inside this abyss. As rewarding as the combat can feel (each character has a good amount of bespoke moves, plus transformations, and the ability to use both the right stick and a button for basic attacks hovers between inspired and pointless), it more often feels bland. There’s very little need to memorize enemy attack patterns, mostly due to the fact they don’t seem to have any. They have unique attacks, but they don’t use them with any noticeable coordination. You can copy-paste your dodge, block, magic, attack patterns to most of the battles, excluding the ones that throw a saw-blade in the middle.

As rewarding as the combat can feel, it more often feels bland.

All of it makes it a relatively unencumbered odyssey; you’ll fly right through it easily. The final encounter wrapped up with so little friction I was positive there must have been three more forms for the warlock to reveal. Roguelikes thrive on their difficulty, not just as a matter of tradition, but the feeling of lifting yourself back up, dusting off and giving it just one more manic go. That isn’t here. By round three you should be a pro, and the game doesn’t give much incentive to master beyond that.

A game is more than its inspirations, sure, but a game that can add to its borrowed parts deserves recognition. It’s like lending your friend a portable hard drive only for it to be returned with more cool movies on it. A sort-of-Metroidvania roguelike-kinda, the tongue-twisting to create a definition shows that the inspired overlapping of elements does spark sometimes. But between those shooting star moments, too much of Odyssey weakens under the pile. It’s many things at once with new ideas; this is the both the kindest and most damning thing to be said about it.