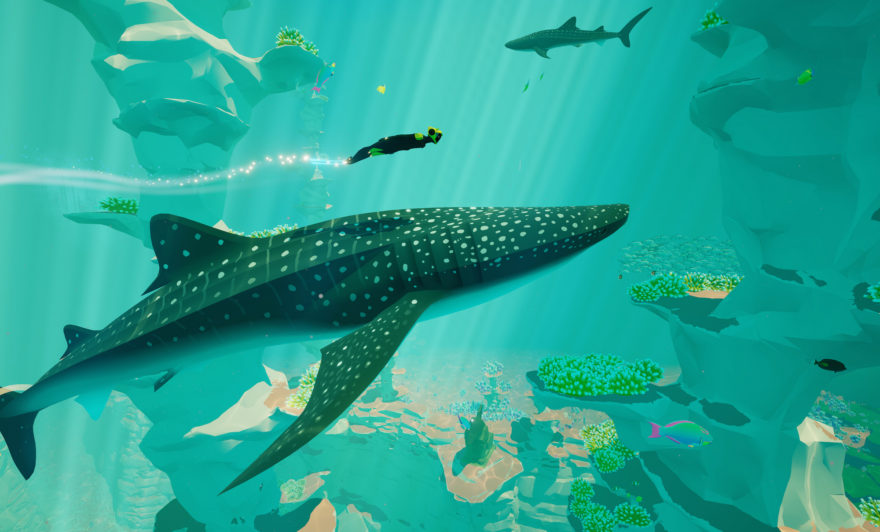 When I try to picture what the ocean depths must have looked like near England’s Jurassic Coast, 300 million years ago, I picture something like Van Gogh’s Starry Night (1889). I picture a space of stillness but also turbulent life, things moving ceaselessly in the restless dark; I picture everything swirling, vortices upon vortices.

What I picture undoubtedly derives from my encounters with what seems to have been the region’s primary resident: the ammonite, a snail-like prehistoric shellfish with a shell in the shape of a swirl. Ammonites were everywhere in this place. If you look hard enough, you can find their fossilized shells among the rocks under the muddy cliffs, engorged by pyrite or embedded in brittle clay. Ever since I found some myself, I’ve appreciated the ammonite for its unlikely dominance and aesthetic incongruity. On one end, an ugly little squid-like head; a head that looks primordial and amorphous and evolutionarily incomplete. On the other end: geometric perfection—something abstract, almost purely iconic, as impossible to improve as a mathematical truth.

I kept thinking about ammonites when I played through Abzû, probably because the game itself seems to take them very seriously. You first encounter just their shells, which constitute a kind of inscrutable collectible; there’s no way to tell how many you have, how many you need, or what purpose they will eventually serve. But then, not too far into the game, as you travel further and further into the explosively colorful ocean depths, you find more of them in various places. An ammonite painting adorns the walls of an ancient temple. An ammonite ghost, of sorts, floats idly above a city of spectral arches. You encounter them both alive and immortalized by reverent representation, alongside other creatures—the orca, the shark—that appear both ordinary and mythic, biological and theological, at the same time. The recurrence of the ammonite feels extremely purposeful, as though the game were reaching for symbolism—even totemism—in an old, lost sense.

Creatures appear both ordinary and mythic, biological and theological, at the same time

As you may have heard, Abzû is a lot like Journey (2012): it takes about 90 minutes to play, its aesthetic—developed by Journey’s art director Matt Nava—is the same kind of cel-shaded minimalism, it has a linear structure that nonetheless provides an illusion of expansive freedom, and it’s almost completely wordless. You play as an anonymous, androgynous diver, a figure very similar to Journey’s skinny Jawa, swimming purposefully—but not too purposefully—through a gorgeous ocean world that pops with color and light. The music soars alongside the diver’s acrobatic twirling; the strings get choppy and urgent when you enter a triumphant slipstream, propelled forward by other creatures. But it’s precisely these other creatures that make the game feel very different, in the way they’re anchored both to realism and to ideality.

The ‘animals’ in Journey were basically sentient magic carpets that you could ride around, more object-like than anything else. I don’t mean that as a criticism. I mean simply to point out that Journey’s overall interest in abstraction—in presenting a quest narrative with every constitutive element reduced to its barest essence—extends also to the fauna it presents, which appear almost exclusively as facilitators or enemies. The sea creatures in Abzû are facsimiles of real animals. They have lives beyond the player; they’re morphologically accurate, behaviorally unique; they have species names that appear in the bottom-right corner of the screen when you try to ride them, almost exactly like the car brands in Grand Theft Auto. Riding them isn’t really riding them: you cling like a child, gingerly, as they take you where they want to go. Take a break to “meditate” on one of the game’s meditation rocks and you can observe them from a distance, swimming in schools and occasionally eating each other—just being, by themselves, each in a different way. The game might be the best aquarium simulator ever made. Not that there’s a ton of competition.

At the same time, it’s as much about real animals as it is about spirit animals: animals as dreams, icons, symbols. It’s about animals that begin in flesh but have more power, somehow, as ideas, pitted against forces of a more human kind that exploit, overrun, and destroy. The basic plot is an eco-fantasy worthy of Captain Planet: at several points in the game, you encounter a blackened ocean cavern that you eventually revitalize with biodiversity. The cavern explodes with color—blue, orange, coral pink—then scores of different fish come bursting through the floor. A space ostensibly already filled with water fills with new water of a different kind, imbued with light. It’s hard not to see these moments of triumphant repopulation as fantasies engendered by the very real depopulation that plagues oceans across the world. Last September, the World Wildlife Fund and the Zoological Society of London issued a joint report stating that, collectively, populations of fish species used by humans have decreased by over 50 percent since 1970. And yet, what’s surprising about the repopulations in Abzû is that they occur not through any kind of activism, nor through any kind of material intervention, but through trips to a world of spirits—a world of icons. An idea of an orca springs forth from a fountain of the mind; the cavern’s rebirth follows, but only afterwards. All the while, the ghostly ammonite reigns above.

The ideality of these animals raises a few big questions. Is Abzû about the ‘real’ ocean or a virtual one? Is it about literal ecosystemic problems we now face, or would it prefer to take us away from them? Is it a game that wants context or a game, like Journey, that wants to be self-enclosed? The answer is hard to pin down as the game is reticent by design. But it does seem to insist on the erasure of these binaries, suggesting a link between the virtual and the real, the aesthetic and the pragmatic, the iconic and the specific—a link, in other words, between the kind of purely aesthetic experience the game itself offers and real material problems in ocean ecosystems. Like Journey, Abzû is in some sense a game about archetypes and archetypicality, letting you dwell within and among them as though to remind you of their firm embeddedness at the foundation of other things. And yet, in a significant structural twist, it’s about recovering archetypes that no longer seem to have potency, rather than playing through an archetypal sequence—the Journey—that’s still going strong. And it proposes quietly, in its own weird and paradoxical way, that recovering these creatures as symbols might be a necessary step before we can rescue them from exploitation.

The basic plot is an eco-fantasy worthy of Captain Planet

Every year in Taiji, Japan, thousands of dolphins are slaughtered for their meat in a six-month hunting drive that stretches from early September to March. This local tradition was the subject of The Cove, a 2009 documentary that won the Academy Award for Best Documentary Feature and has reportedly led—alongside a declining demand for the mercury-filled meat—to a significant decrease in the number of dolphins killed each year. But the hunt continues. 1,873 cetaceans (i.e. dolphins and whales) were slaughtered or captured during the 2015-2016 season. The animal activist organization Sea Shepherd, which first brought the Taiji hunts to international attention in 2003, has sent volunteers every year to keep watch over the hunts with copious pictures, video, and livestreaming. Because intervening in any other way would be a surefire way to get deported, the volunteers maintain a constant level of surveillance so that the dolphin hunters are forced to do their work under an elaborate series of tarps, thus making their killings with less efficiency. Sea Shepherd has no chance of stopping this “ecocide” in the short-term, only slowing it down. But it’s impossible not to see the blood that spills underneath those tarps, staining the water red.

The terrible actuality of this ongoing slaughter seems so far away from Abzû’s calming virtual ocean. But the game simulates a conceptual struggle that’s at the core of the conflict between the Taiji hunters and Sea Shepherd—a struggle between modes of seeing. One side sees the animals as little more than capital and biomass; the other is doing all that it can to remind viewers that they’re “sentient, socially complex cetaceans.” Sea Shepherd, like The Cove, has little agency over the pragmatic side of the fight—how many dolphins, how many whales. But the rhetorical side of the fight is crucial: convincing the international public to see these creatures as subjects rather than objects, destroyed by a regime of casual objectification that is itself rhetorical first and foremost. You have to be able to see dolphins as biomass before you can behave as though they are.

Vast schools of fish are a defining aesthetic feature of Abzû: schools of fish that swirl around you like clouds of colorful smoke; schools of fish so dense that they’re literally impossible to swim through, like giant boulders made of guppies. The game presents the diversity and vibrancy of ocean life through what amounts to extremely complex (and hypnotic) particle effects. And yet, at the same time, it never wants you to see its creatures solely as patterns, solely through a holistic, totalizing lens. It never wants you to see them as biomass. To ‘meditate’ means to regard them as individuals—not just individual species but individual fish. To rescue them is, before anything else, to transform them back into mythic icons, not just because reverence is an improvement over disregard but because it recovers something intrinsic to them that we need as much as they do. An otherness. A sacredness.

The ocean was a place of terror to the Victorians, before they tamed it with aquaria. It was still a space of mystery in the 20th century—always a metaphor for the unconscious in psychoanalysis, for that deep, dark place within us that we can never know—before it was tamed again by factory fishing, the SeaWorld aqua-entertainment industrial complex, and James Cameron’s quixotic quest to capture it all in 3D. The desire to make it a space of reason, control, and profit will never abate. But animal symbols remain embedded in the fabric of capitalism, even if they’re dormant. Ammonite shells adorn the shitty nautical bric-a-brac at HomeGoods and TJ Maxx. The last time I saw that shape, it was on a shower curtain hook at Bed Bath & Beyond. The creature is long dead. But the form, that perfect form, somehow makes insistent, implacable demands.

Claude Lévi-Strauss, who believed that totemism was at the base of every culture, including Western modernity, once said that animals are “good to think with.” Abzû makes the audacious suggestion that thinking with them differently, reverently, is the only way to set them free.