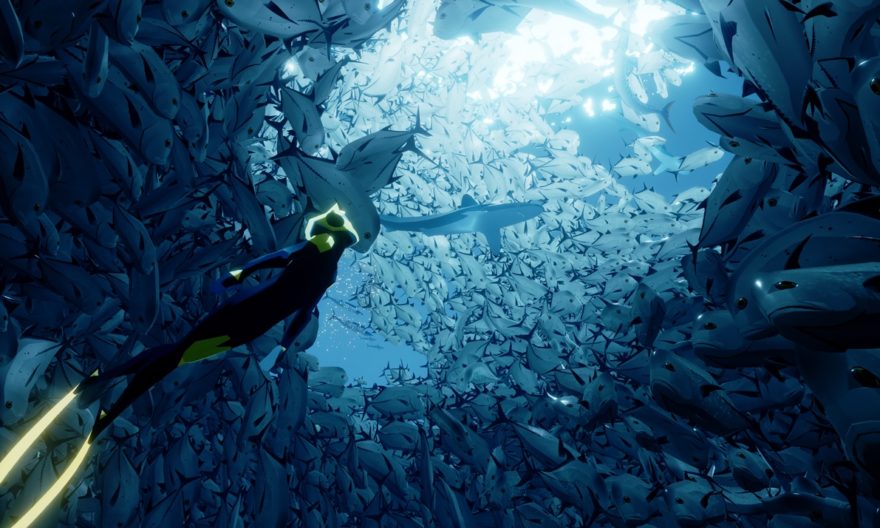 ABZÛ has pinks, it has blues, it has greens, it has oranges. It has whales, jellyfish, angler fish, and dolphins. And all of it is going to flourish on your PlayStation 4 or PC on August 2nd. I can’t frickin’ wait.

This is a game especially for those who, like me, have a penchant for underwater levels in platformers. Ignore the terribly annoying ones in Crash Bandicoot 2 (1997) and focus on the musical joy and liquid flow of supreme underwater levels like Rayman‘s “Sea of Serendipity.” ABZÛ seems to have crystallized those levels and then melted them into a large and unarguably beautiful ocean world. Understanding how this has been achieved comes easily once you find out that the team behind ABZÛ is led by Matt Nava, who was previously the art director on thatgamecompany’s Flower (2009) and Journey (2012).

Just look at this thing and, just as important, listen to the soundtrack provided by Austin Wintory (who also did the music on Journey):

Aside from swimming with schools of fish and chasing curiosity between tiers of coral and wiggly weeds, exploration in ABZÛ will have us pursue the traces of an ancient civilization. About halfway through the E3 trailer, the swimmer encounters wall paintings depicting people carrying golden treasures. The title of the game offers further insight into what these paintings are all about. “Abzu” is the word for the Mesopotamian concept of the “primeval sea,” which was believed to reside in the void space beneath the underworld. These paintings could possibly be of Mesopotamian origin.

discover whatever remains at the seabed

It is perhaps these dark waters that the game will be luring us towards as we swim downwards. You might see evidence of this in the progression of the trailer, which starts in the upper reaches of the ocean where light and color shimmer and bloom, but ends up moving down into darkness. You can see near the end of the trailer that man-made (or alien-made?) structures feature too, with a large triangular gateway opening up for the swimmer.

As I’ve said before, it could be that ABZÛ ends up touching on the kinds of monsters and myths that H. P. Lovecraft did with his Cthulhu mythos, or it could continue with its peaceful manner as we descend its liquid layers and discover whatever remains at the seabed. Whatever the case, we are only a couple of months from finding out where it will take us now.

You can find out more about ABZÛ on its official website. It comes out for PS4 and PC on August 2nd.