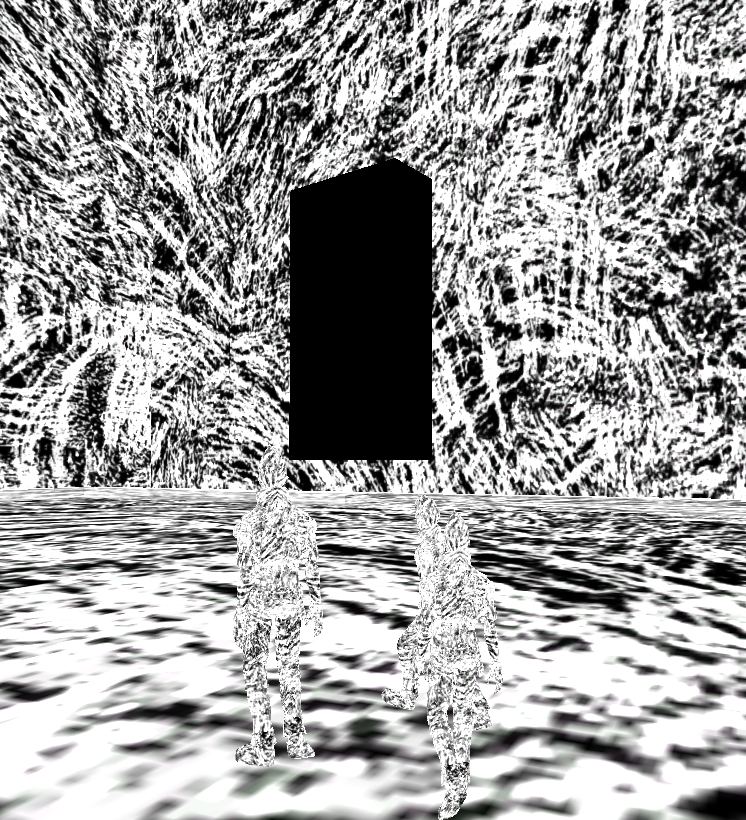 The most experimental and daring (read: LIT) indie music artists have been flirting with videogames for a while now. Grimes headlined Moogfest with a Microsoft Kinect-powered interactive installation last year; the bassist from the noise-rock band Lighting Bolt, Brian Gibson, recently created the VR-favorite rhythm hell game Thumper; and Björk literally cannot even right now with how much she loves VR.

Today, architect/electronic musician Moiré joined the digital revolution, forgoing the usual music video to instead release a browser glitch art game in conjunction with his newest album, No Future. Created with interactive experience designer Isaac Cohen (AKA Cabbibo), MONOLITH consists of large, glitchy, empty spaces populated by a smattering of human avatars, a 2001: A Space Odyssey-like floating slab, and the low drum of hypnotic electronic tones. The player directs the monolith with the arrow buttons, jettisoning it around the static-y landscape as the humans run toward it with a manic kind of fervor.

their bodies barely distinguishable from the machine

Pulling from concepts in the album, MONOLITH explores a version of our dystopic technological future. According to Clash magazine’s review, the No Future album “refracts the familiar pulse of techno through the critical dystopian lens of Philip K. Dick, an author who seemed to assiduously preempt a future no-one especially wanted with alarming accuracy,” calling it an “astute dissertation on an era that is supposed to be filled with innovation and possibility, but which instead wants to turn everything into a homogenous cookie-cutter image image of itself.”

In MONOLITH, the skin of the avatars reflects the world’s digital noise, rendering their bodies barely distinguishable from the machine. In fact, in a world infested with glitches, only the monolith and a vacuous door stand out in stark black contrast. The vague human forms follow the slab mindlessly, a hoard of people pulled toward the monolith like flies to a light. Given instructions to “unite the crowd, enter the black door,” players use this pull of attraction to create a swarm of bodies, until a door opens up that allows them to jump to the next dimension, before starting the process all over again.

When it comes to the album, Clash reviewer Mat Smith aptly describes how it showcases “dance music with a slightly detached, vaguely cynical atmosphere, despite familiar motifs; cautious and cautionary, it eschews flashy statements and cryptic say-nothing/do-nothing minimalism in favour of a sound which is instantly recognisable as possessing negative sentiment.”

The game reflects a similar tone, presenting an experience of collective detachment in a world adrift with technobabble and cultish homogeny. Those who have attended MDMA-infused music festivals should feel right at home.

You can play MONOLITH here, and stream or purchase a vinyl copy of the No Future album here.