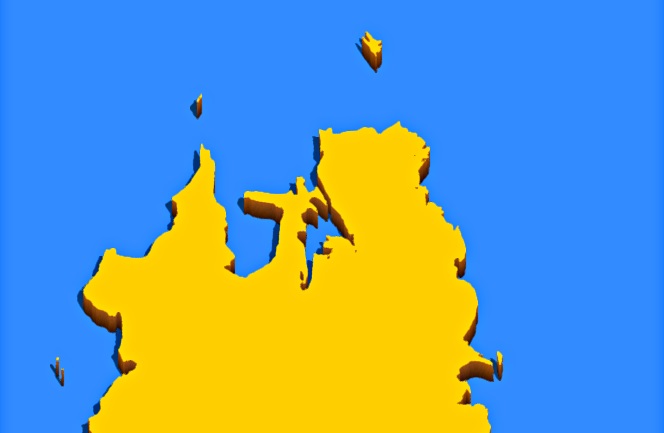 Clément Duquesne has made a bunch of impressive games and digital toys using procedural generation, but one of his latest is particularly striking. Called Accurate Coastlines, it lets you scroll your mousewheel to zoom infinitely inwards on the shores of an unspecified island.

You can target your cursor at any part of the island to zoom in on it, but doing so anywhere but the coastlines prove fruitless—the game works by contrasting the yellow of the land against the blue of the surrounding sea. This draws you to an endless pursuit of minutia; to see how tiny and detailed the island’s contours can be. With this, Accurate Coastlines feels like a riff on similar web toys like Scale of the Universe and Zoom Quilt. It’s something you play with to help a couple of idle minutes pass by quicker. But it also, implicitly, invites deeper thinking.

We’re at a point in time where we’re used to seeing scale maps of countries used to visually demonstrate news stories. Most recently, the US presidential election coverage used a map of America to show how the majority of each state voted. It’s a map used to ultimately demonstrate divide, with the red and blues representing the two major opposing parties steadily being filled in as the votes came in.

I’m also reminded while playing with Accurate Coastlines that right-leaning politicians this year in both the US and the UK have put an emphasis on borders and building walls to keep out immigrants. They spoke in broad terms about erecting physical dividers between countries, which begs the question of where exactly they would build these walls—along what lines would they lay the bricks? Accurate Coastlines almost feels like it’s poking fun at that idea, as if it acts as demonstration of how granular you can get with demarcations. Which grains of dirt belong in America and which in Mexico, Mr. Trump?

Accurate Coastlines is a pleasing web toy that you can play without thought. But it’s also one that seems evokes the inevitable inaccuracy of map making, and the important distinctions and omissions we make when drawing up borders.

You can play Accurate Coastlines in your browser over on itch.io.