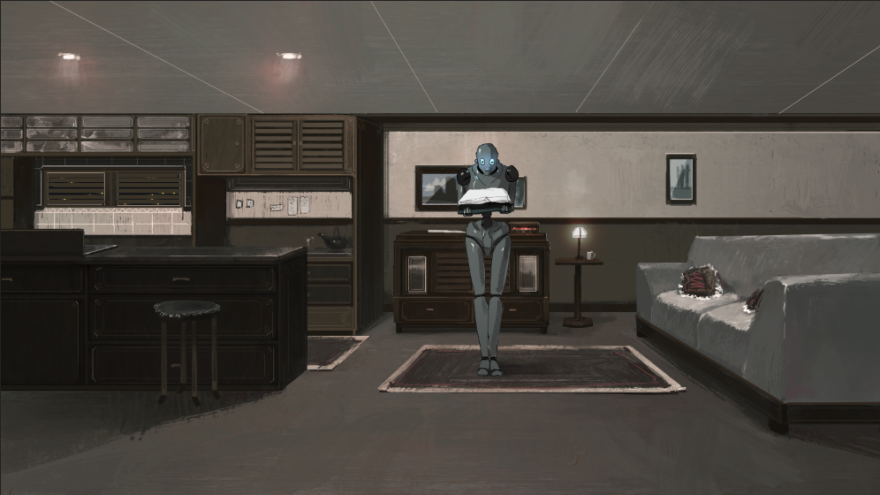 Rarely does the first novel hit home. Established authors confess to the mounds of unfinished journals cluttering their homes, outweighing the sum of their finished work. Pen-strokes take an incredible amount of time to mature; flavors condense and heighten over time, and superfluousness evaporates into the void.

Maker’s Eden, a game that relies heavily on narrative, seems to be one person’s first crack at it, verifying that some words might best be recycled into fodder for new material. Even the title seems to fawn over itself. A slimmed-down, pointy, clicky graphic novel experience in the shadows of Jordan Mechner’s The Last Express, with nodes of Funcom’s The Longest Journey, it belongs to the school of game in which we click everything clickable until something hits—a facet admittedly forgiven when the story, itself, clicks.

It takes great lengths for some writers to find their voice; often, this involves regurgitating influences and inspirations without knowing it—those first attempts are part of a purge of material that you might think is brilliant beyond reason, but, you know, isn’t. Maker’s Eden is a college try that we still need to hold alongside recent tours de force like Broken Age, Kentucky Route Zero, and Gone Home. It fails to capture that raw, personal spirit that makes stories memorable.

Act one—of three—attempts to establish that dystopian future wherein you, the protagonist, have woken up with no memory of how, who, or what, setting off on the eager ambition of figuring it all out. We’ve been here before, and we continue feeling that way, as the character never truly pieces anything together, up until a finale that halts the adventure when it’d only recently begun. It’s all told at a vicious pitch, full of homages and slight nods, banking that I—the presumedly engaged—would be along for the ride. It never stops to check if I am.

Even if dim, your character is the proverbial light in the dark, which the game takes quite literally. Visually, Maker’s Eden nails its desired atmosphere, marrying dystopian dredge with colorful pastel offsets and retro robotic design. The soundtrack—also available on Steam—is a wonderful mix of electronic noir and jazzy transience. But this aesthetic provides a world we don’t get to interact with. We interact with cardboard cutouts of supposed characters, wandering through the soundstage of a favorite tv show only to learn that everything is fake.

A taxi cab driver just happens to show up to take you wherever you want to go, a super secret club opens its doors to you at the drop of a hat, and the pursuing police somehow don’t miss you destroying a drone and walking around everywhere. Moments like these build up before you find yourself checking your watch—only to find that Act One is over. We all have stories to tell. Perhaps with its ensuing acts A Maker’s Eden will find its. For now, it rests as something kind of cool, slightly interactive, and mostly, an unfinished journal.