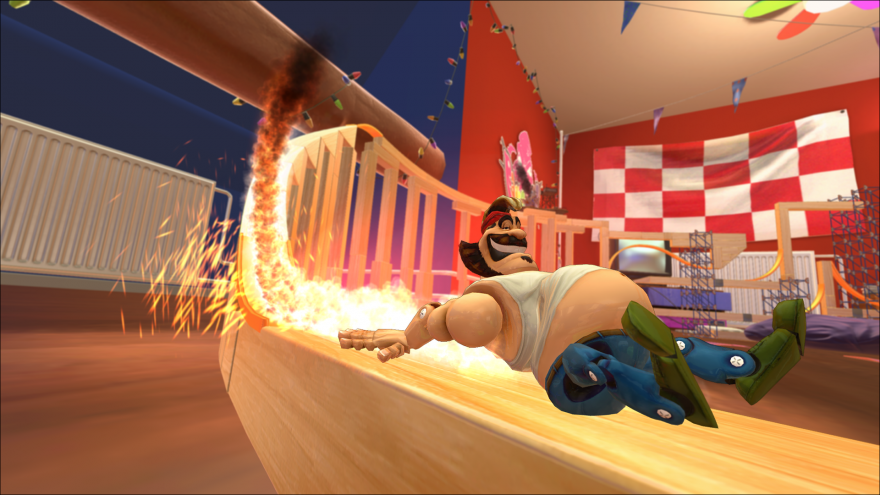 The ’80s aren’t dead, they’re just slouched on the couch, groaning at the concept of moving, while wearing greasy tank tops that don’t fit over their rotund belly. They’re my dad, basically.

If that’s the case, then Action Henk! is a midlife crisis. Henk isn’t content with what he’s become (see above), so he’s out to prove that an overweight ’80s action figure can still keep up with the likes of Sonic. Henk may not have nimble feet, but over the years he’s earned himself a large butt apt for sliding down toy car racetracks and around loop-de-loops at blazing speed.

He does so to destructive fanfare: army men toys blowing up computer keyboards and model planes flying past in celebration. Henk’s surroundings would fit perfectly in another Toy Story movie. It’s not hard to see that RageSquid has a real passion for the toys of their youth; their office looks like a child’s play room.

There are no rings to collect. Not even an enemy to dodge. But RageSquid is stripping back for a reason. It knows what it’s after with Action Henk!, and that is pure momentum-based platforming amid a toystalgic world. Sliding down slopes, picking up speed, and then flinging Henk into the air to land butt-first onto the next slope is where it’s at.

Action Henk! is that swing in the park I always anticipated with uncontrollable giddiness as a toddler. It has me hammering the arrow keys just like how I kicked out my feet to gain speed on the swing; my whole body is part of the push to go faster. There’s joy to be found in the flow of uninterrupted motion. But unlike a swing, Action Henk! has finish lines, and strapped to the end of them are online leaderboards, encouraging you to up your personal best. It’s near-impossible to resist. So you reiterate, find new paths that open up if you can get enough air, learning to use the grapple hook without fumbling.

Sonic—or rather, Sega—should be embarrassed right now. He’s being upstaged by a fat man who’s not so dissimilar to his egg-shaped arch nemesis. Action Henk!, a videogame from a small Dutch team, captures the spirit of the momentum-based speedrunning platformer better than the blue streak has managed in years.

Action Henk! is currently in pre-alpha, but there is an early public build playable in your browser.